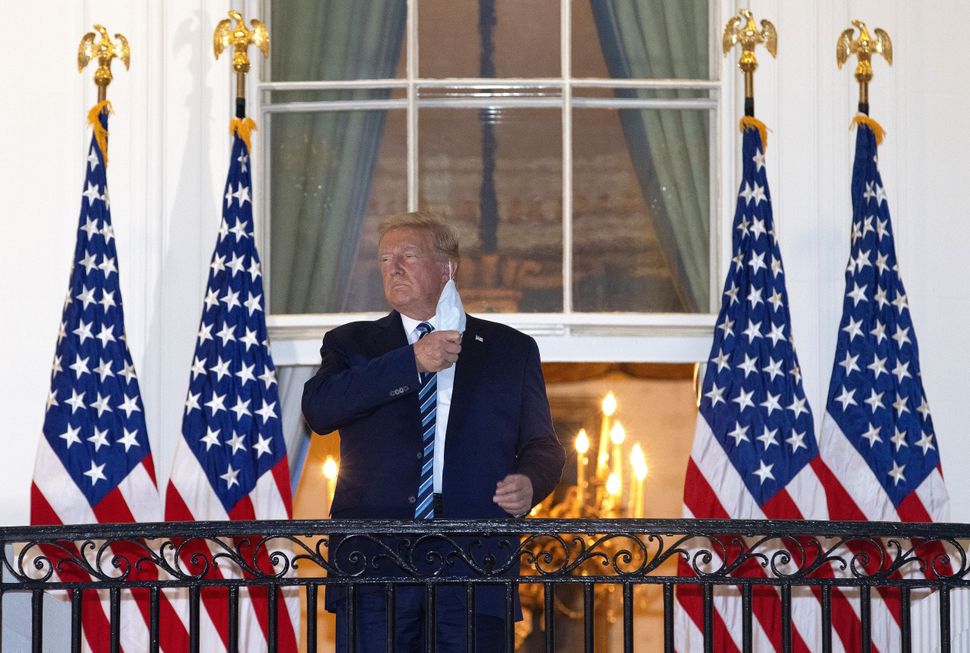 Donald Trump upon his return to the White House October 5, 2020 Image by Getty/Win McNamee/Staff

In film theory, there’s something called the Kuleshov Effect, which teaches that juxtaposing images in sequence can suggest completely different reads of a shot.

The typical example is an image of a blank-faced man placed alongside an image of a baby in a casket, a pairing that makes viewers interpret the man’s expression as sad — but if the man is instead shown alongside a bowl of soup he reads as hungry. All film students learn this quirk of editing.

Most also watch Leni Riefenstahl’s 1935 Nazi propaganda film “Triumph of the Will.”

Now, a viral tweet comparing a montage from that film to a White House video of President Trump’s return to the presidential residence from Walter Reed Medical Center is testing the Kuleshov Effect’s premise — while drawing a troubling parallel.

Journalist and filmmaker Matt Danzico juxtaposed the images of Trump’s homecoming with shots from Riefenstahl’s film. The resemblance, when seen in a split screen, is striking, including similar shots of landing gears touching grass, close angles of Trump and Hitler disembarking from aircrafts and reverent up-tilted views of the two leaders waving from balconies.

I split screened shots from Leni Riefenstahl’s 1935 Nazi propaganda film, Triumph of Will, with @realDonaldTrump’s video of his return from the hospital. Not sure if this was intentional, but it’s eerily similar. His media team looking to history for inspiration, perhaps? pic.twitter.com/ZsZfHLttdL

Danzico called the images “eerily similar,” while noting in a second tweet that he’d placed a single clip from the White House film alongside non-continuous footage from “Triumph of the Will” to better mirror the Trump film. And while his argument was persuasive enough to go viral — the shots do look alike — he also did heavy Kuleshov-lifting by putting them together and forcing our association. Humans are wired to find commonalities, and make meaning out of images placed close together. We seek patterns. That’s what makes film, and film editing, work.

So is there any merit to the comparison? Riefenstahl’s films, despite their subject, are still touchpoints of modern filmmaking because they serve as a template for creating effective visual stories. Techniques she pioneered continue to be used in documentaries, and her imagery has frequently been invoked as a shorthand for fascism in blockbusters like “Star Wars” and “Game of Thrones,”

But Riefenstahl was a subtler breed of propagandist than those homages indicate — and subtler still than whoever was behind the film for Trump. Her films were effective because they didn’t just prop up Hitler, but the German people as a whole. Even in the Danzico’s clip, curated to predominantly focus on Hitler, we see the people receiving the dictator with glee. The full film devotes far more of its time to Hitler’s volk than to the man himself, because it knew that it was ultimately for their eyes, and meant to rouse their spirits.

And therein lies the main difference: The filmmakers aren’t thinking of boosting Trump’s supporters. They’re thinking of pleasing Trump. And that alone is all the distinction we need.