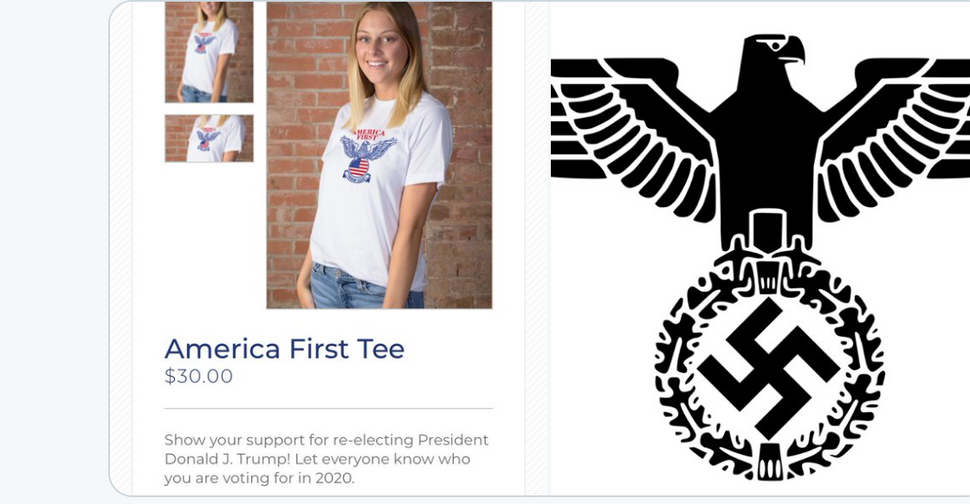 On the left, a Trump campaign t-shirt. On the right, the Nazi era Parteiadler symbol, as posted on Bend The Arc’s Twitter. Image by Twitter

As wrongheaded as they were in vying to keep the U.S. out of World War II, the America First Committee took great pains to avoid fetishizing fascism.

While the group certainly attracted its share of anti-Semites and German American Bundists, its trick was to appear as American as apple pie when courting isolationists. That meant not invoking Nazi imagery — even as its figurehead Charles Lindbergh spewed Nazi talking points. Critics of today’s America Firsters claim they’re being a lot less subtle.

On July 1, the Twitter accounts of the Jewish progressive group Bend the Arc and the Republican anti-Trump group the Lincoln Project noticed a striking similarity between an America First t-shirt for sale on the Trump Make America Great Again Committee website and the Nazi eagle.

The President of the United States is campaigning for reelection with a Nazi symbol. Again.

On the left: an official Trump/Pence “America First” tee.

On the right; the Iron Eagle, the official symbol of the Nazi party.
⁰It’s not an accident. Bigotry is their entire brand. pic.twitter.com/mSOBxwf7Wa

The similarities are there, though some pointed out that this eagle also looks a little like the one on the back of a dollar bill.

Still, the eagle doesn’t quite match that familiar design. The direction the eagle’s facing is different from the American eagle — President Truman actually ordered the bird look to its right when formalizing the eagle’s appearance on the presidential seal after the war. On the t-shirt, our national bird grips a circular American flag in its talons and looks like an aesthetically uncomfortable blend of the Reich’s sleek Parteiadler eagle, which holds a wreath-encircled swastika, and ugly colonial era sculptures like this. The flag has taken the place of the olive branch and sheaves of arrows the American eagle clutches, presenting a more isolationist message (no duality of war and peace). Nixing the “E Pluribus Unum” scroll the American eagle typically holds in its beak discards the message of unity that we typically see on our greenbacks and the presidential seal. It’s bad graphic design, but the content is perhaps appropriate for the divisive Trump presidency, Nazi resonances aside.

Some on Twitter have sourced the graphic, sans text, back to the stock image site Vectorstock. The artist, Masay, is prolific, and has also designed a Holocaust Remembrance Day image — albeit a pretty tasteless one.

It might be noted that the banners of the America First party in David Simon’s “Plot Against America” TV series look a little closer to the traditional dollar bill version. 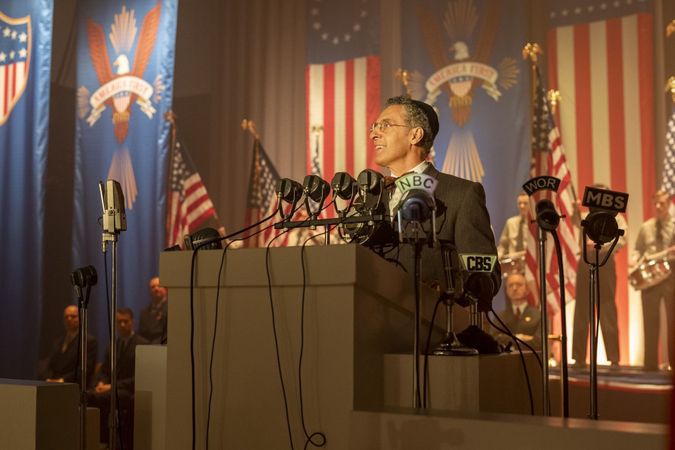 John Turturro as Rabbi Lionel Bengelsdorf in “The Plot Against America.” Visible is an eagle design on the America First banners that resembles the one on the backs of one dollar bills. Image by Courtesy of HBO, Photo by Michael K. Short

Meanwhile, the actual America First Committee’s own insignia was not avian at all, opting for a logo that resembled Captain America’s early shield, or the one resting on the American eagle’s chest.

This isn’t the first time the president has used alleged dog whistles. https://t.co/GIcjFGJ6j4

Are eagles a regular motif in American art? Absolutely, but presented like this the campaign has put itself in an awkward position given Trump’s long history of posting fascist imagery and his recent retweet of a supporter shouting “white power.” Why give people ammunition if that’s not what’s intended?