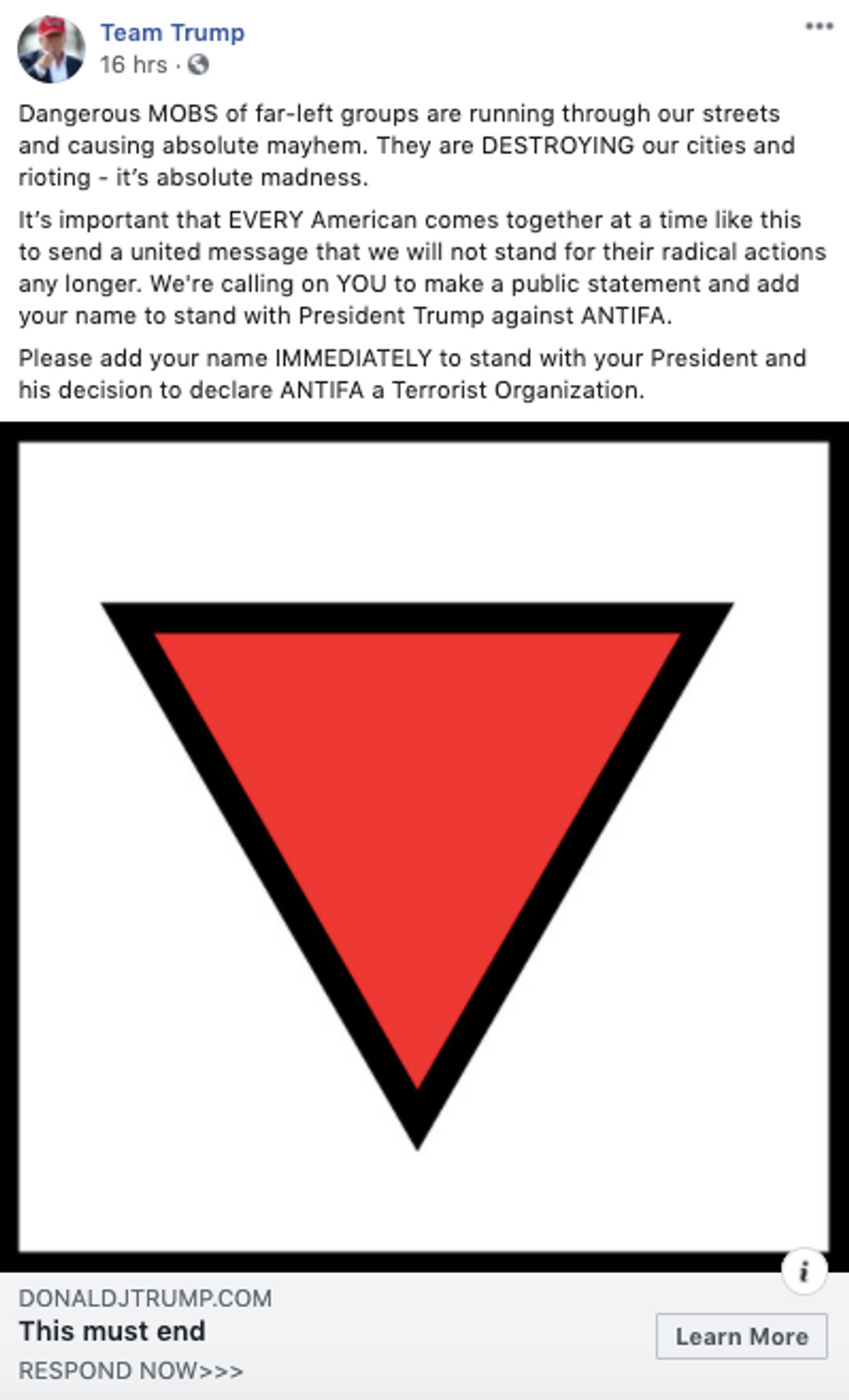 In two Facebook posts, Donald Trump’s reelection campaign tied the loose network of anti-fascist activists known as “Antifa” — which he suggests naming a terrorist organization — to an upside-down red triangle, a symbol strikingly similar to one used by Nazis in concentration camps to identify political prisoners and communists.

No mention of today’s news, but clearly this is in response to the president’s Facebook ads using a red triangle. https://t.co/IRXc5dL2os https://t.co/SOVoyGEXe9

“Dangerous MOBS of far-left groups are running through our streets and causing absolute mayhem,” the post reads, citing no evidence for the claim. “Please add your name IMMEDIATELY to stand with your President and his decision to declare ANTIFA a Terrorist Organization.”

Related story: Trump abbreviates Secret Service as S.S. — although he knows the right way to do it

“Our policy prohibits using a banned hate group’s symbol to identify political prisoners without the context that condemns or discusses the symbol,” a spokesperson for Facebook said in a statement.

The triangle symbol does not appear to be widely used by people or groups aligned with Antifa, which is more commonly identified by a red and black flag logo. Some people aligned with Antifa, however, will carry a flag used by anarchist movements, which is solid red and black, bisected on the diagonal, creating one red and one black triangle. One Antifa Facebook page, based in Utrecht, in the Netherlands, has a red triangle in its logo.

Beginning in 1933, when Adolf Hitler came to power, Nazi-run concentration camps used a system of different colored triangles, sewn into their prison clothes, to mark prisoners, according to the Holocaust Encyclopedia. Political prisoners wore red, gypsies and “vagrants” wore black, queer people were given pink triangles and Jehovah’s Witnesses purple. Jews wore the infamous yellow star, unless they were part of another group — in the case of a Jewish communist, for example, the upside-down red triangle would be sewn over a yellow right-side up triangle.

The post drew condemnation on social media, including from Jewish figures and groups, like Bend the Arc.

The President of the United States is campaigning for reelection using a Nazi concentration camp symbol. Nazis used the red triangle to mark political prisoners and people who rescued Jews. Trump & the RNC are using it to smear millions of protestors. Their masks are off. pic.twitter.com/UzmzDaRBup

Yet Rabbi Yaakov Menken, the managing director of the conservative Jewish group the Coalition for Jewish Values, said that he did not believe the ad represented an instance of anti-Semitism by Trump or his campaign, and instead suggested that it was Antifa that was at fault for unknowingly using a Nazi symbol.

“Antifa has been and is very threatening to Jewish houses of worship and schools, et cetera,” Menken said, citing reports — mostly false and exaggerated — that Antifa was targeting synagogues in some cities during the recent wave of protests. “The fact that Trump is fighting so hard against Antifa is only to the benefit of the Jewish community.”

Trump, and other Republican politicians, have seized on false reports of people aligned with Antifa inciting rioting in cities where thousands of people have participated in overwhelmingly peaceful protests against racism in policing. In one instance, a white nationalist group created a fake Twitter account under the name @ANTIFA_US, which tweeted calls for violence.