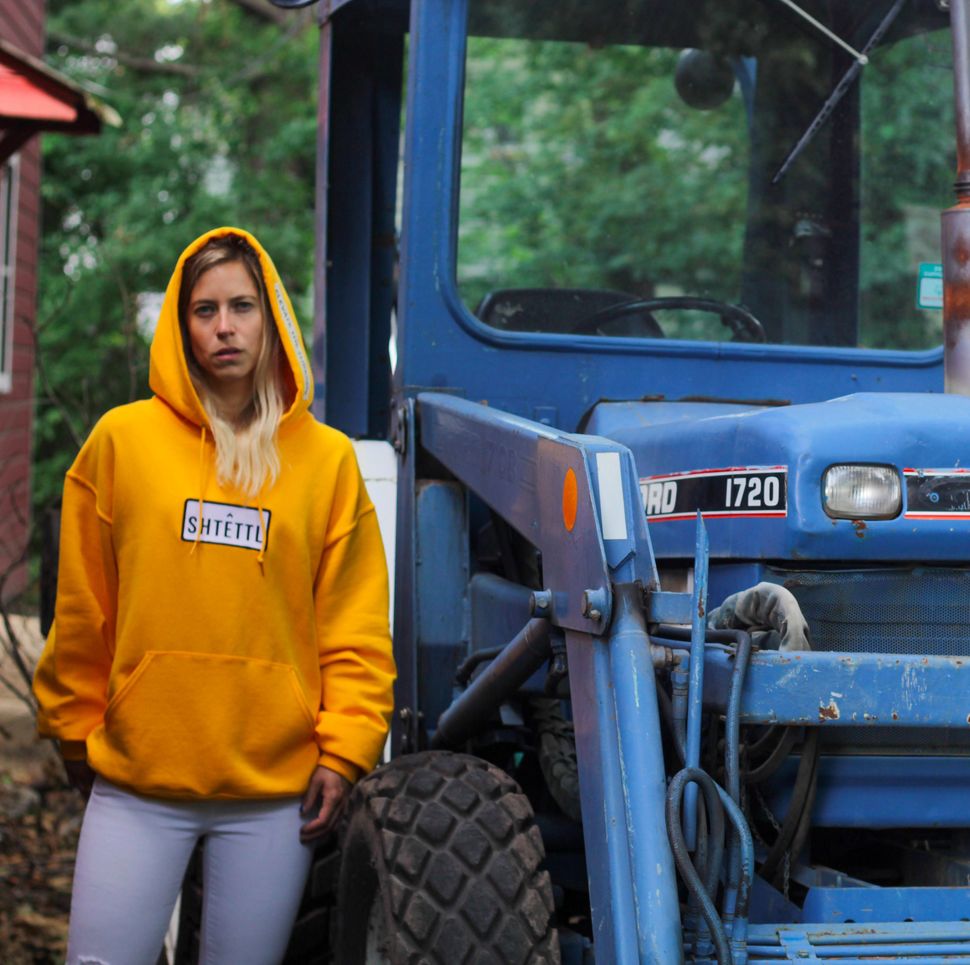 Call it shtreetwear. Call it shtetlcore. The era of extremely Ashkenazi athleisure is here, and it’s forcing Jews to contend with a pressing question: What are “shtetl vibes,” and should you be able to sell them?

On Tuesday, the Jewish Twitterverse took note of Shtêttl, a streetwear-cum-lifstyle brand inspired by shtetls — yes, the small, pogrom-prone villages to which many American Jews trace their roots. The label immediately sparked uproar on social media, with observers questioning what seemed like an attempt to rework a fraught and complex period of Jewish history as a branding strategy. Yet Aryeh Goldschmiedt, Shtêttl’s creative director, said he aims to revive an overlooked aspect of Jewish culture and spread the positive values he believes shtetl culture embodies.

“I’m using garments like a canvas, to bring wisdom and positivity and light to the world,” Goldschmiedt, an artist based in Israel, said.

If the idea of shtetl fashion has you thinking of the “American Pickle” costume closet, you’d be right — sort of. Shtêttl, which launched in 2018, peddles not shawls and suspenders but the monochromatic Brooklyn basics the film lampoons: oversized hoodies, slouchy beanies and slim-fit sweatpants perfect for attending slam poetry events or sipping soy lattes. What sets the brand apart from its many competitors in this genre are the slogans its products bear. If you’re not satisfied with a “Shtetl Vibes” t-shirt, you can buy one emblazoned with the word “Blessed” transliterated into Hebrew or the inspiring (or ominous) proverb “This Too Shall Pass.” Hoodies encourage you to “Elevate the Threads” and baseball caps proclaim their wearers to be “Humble / Bold / Blessed.”

Shtêttl gear might seem better-suited to Bed Stuy than Belarussia, but the brand takes inspiration from the “bold faith and raw simplicity” of shetl communities.

“Shtetls were places of vibrant culture, elevating the mundane, hustling for those in need and living life with meaning & purpose down to the bone,” Shtêttl’s website said.

What Shtêttl lacked, until recently, was any explicit mention of Jews, the actual people who lived in shtetls. By reducing shtetls to a religion-neutral pastoral fantasy, Shtêttl seemed to ignore the legally enforced antisemitism that created them and the persecution their inhabitants faced.

So on Tuesday, many Jews took to Twitter, encouraging Shtêttl to ditch the rose-tinted glasses.

No. Absolutely not. Veto. pic.twitter.com/SB8xhhcUE3

Some accused the brand of commodifying Jewish trauma.

starting a clothing brand but it’s just slogans from my childhood like “A-? Vy no A+”? since apparently there’s demand for Jewish trauma t shirts

Goldschmiedt, who said he was “taken aback” by the criticism, explained he’d refrained from explicitly discussing Judaism on Shtêttl’s website in order to emphasize the universal nature of the brand’s values.

But he said he understood concern about the messaging, and he responded quickly to the not-so-subtle hint he got from Twitter. By Wednesday morning he’d overhauled the website’s “About Us” page to include a crash course on shtetl history that nodded to “antisemitic pogroms and persecution” as well as the shtetl ecosystem’s “complete devastation during the Holocaust.”

Ultimately, Goldschmiedt said, the painful aspects of shtetl life shouldn’t prevent Ashkenazi Jews from celebrating their roots. He recalled the tales his grandmother, a Holocaust survivor born on a shtetl, told about the vibrant culture of her birthplace: As she liked to say, “What didn’t go on in the shtetl?”

“It bothers me that people associate shtetls just with the negative,” he said.

It makes sense to be extremely skeptical of any plan to transform the shtetl into an aspirational lifestyle trend. Shtetl Jews lived lives marked by social exclusion and violent persecution. Given the choice to leave, many did: If shtetl-dwellers were content “elevating the mundane” in the pale of settlement, they wouldn’t have migrated in droves to the United States.

And for American Ashkenazi Jews, immigration narratives reinforced through generations of repetition have only strengthened our collective awareness of the difficulties of shtetl life. Many of us grew up learning about our ancestors’ upward trajectory from poverty and precarity in the Old World to stateside safety and prosperity. In these stories, the shtetl necessarily figures as a dark and dangerous place.

So while American Jewish culture may be deeply informed by the shtetl, it’s hard to imagine our ancestors extolling the “raw simplicity” of shtetl life — or, for that matter, forking over $65 for a hoodie. In many ways, Shtêttl seems less like an embrace of Jewish history than an utter departure from it.

But does that mean all discussion of shtetl history must be accompanied by somber expressions and uncool attire? Shtêttl says no, and they may have a point. The “look how far we’ve come” narrative can obscure the richness of Eastern European Jewish history. It’s easier to flatten the period into a picture of uniform rural misery instead of reckoning with the reality that there were shtetls big and small, poor and prosperous, rural and semi-urban. Shtetl life inspired Marc Chagall’s art and the work of writers like Isaac Bashevis Singer and Sholem Aleichem. Despite persecution, places like Belarus became hubs of “intellectual Jewish life,” the Forward reported, where rabbinic dynasties formed and yeshiva students filled busy streets.

That’s why Yiddish composer Anthony Mordechai Tzvi Russel remarked on Twitter that knee-jerk criticism of the brand is reductive. Shtetl history, he argued, contains as much “Jewish life” as “Jewish death.”

I’ve been to former shtetls (shtetlekh) & every one is different; some have been the site of atrocities, others not; most directly on the fronts of every war in eastern/central Europe for the past 200 years. (This is a shul complex in Astryna, Belarus in 2017.) pic.twitter.com/iohmh1IMzI

Or as Goldschmiedt put it, “For every tear there was laughter. To hold both of these emotions is a lot of what Jewish history is about.”

It would be a mistake to sanitize that history in the interest of selling sweatshirts, but neither should we ignore it altogether. If Shtêttl thinks it can redefine a period of history too often reduced to its worst elements, we’re waiting — with one raised eyebrow — to see how they do.