A Gross tale of traveling to Chelm and back 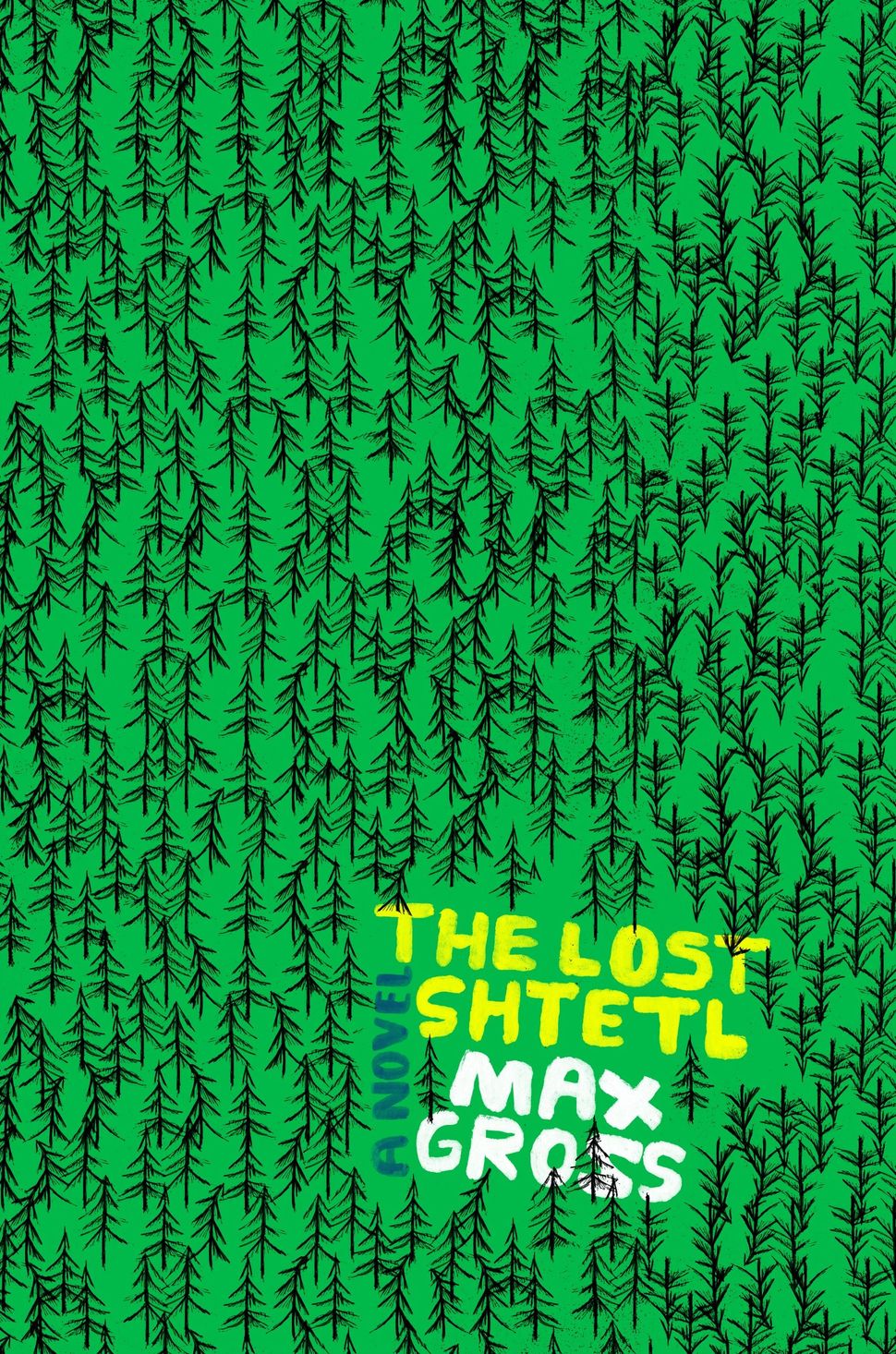 Chelm Two: “The Lost Shtetl” is set in a fictional Polish shtetl. Image by HarperCollins

The Lost Shtetl: A Novel

What if the Jews of a forest shtetl were so dismayed or disinterested by their Polish neighbors of the First World War era that they just lost touch with their co-nationalists? That’s the central conceit of “The Lost Shtetl,” the debut novel by Max Gross — a former Forward staffer and current editor-in -chief of the Commercial Observer.

As with Hiroo Onoda, the Japanese soldier who spent 29 years in the Philippine jungle not believing that World War II was over, or Herschel Greenbaum in Seth Rogen’s “An American Pickle” the drama comes when the world comes crashing back into these isolated lives. And that time is now, or so. Although most representatives of the contemporary Polish scene, including members of antisemitic political factions, are given courtesy pseudonyms, we know, from the section entitled “Fleshpots” that the current captain of the Polish national soccer team during the events of the novel is Robert Lewandowski — an era that stretches from 2014 to today.

For Kreskol, the lost shtetl referenced in the book’s title, the world comes back with a bang after its elders send Yankel Lewinkopf to the local Polish town of Smolskie to tell them that there might be a murderer on the loose. Pesha and Ishmael Lindauer have both separately run away from the shtetl and, given the rabbis utter lack of experience in these matters, they worry that Ishmael may intend to kill, or already have killed, Pesha. They send Yankel because, though he’s a relatively capable young man, he is illegitimate — a “mamser” — and so also relatively unwanted by his dissipated mother, disinterested extended family and the entire shtetl.

If this sounds like Chelm — that fantastic Jewish village of legend where fools live according to their own rules of logic but stories have a way of making sense to us anyway — that’s because Kreskol is geographically close to Chelm and it feels like Chelm. At least to start with. 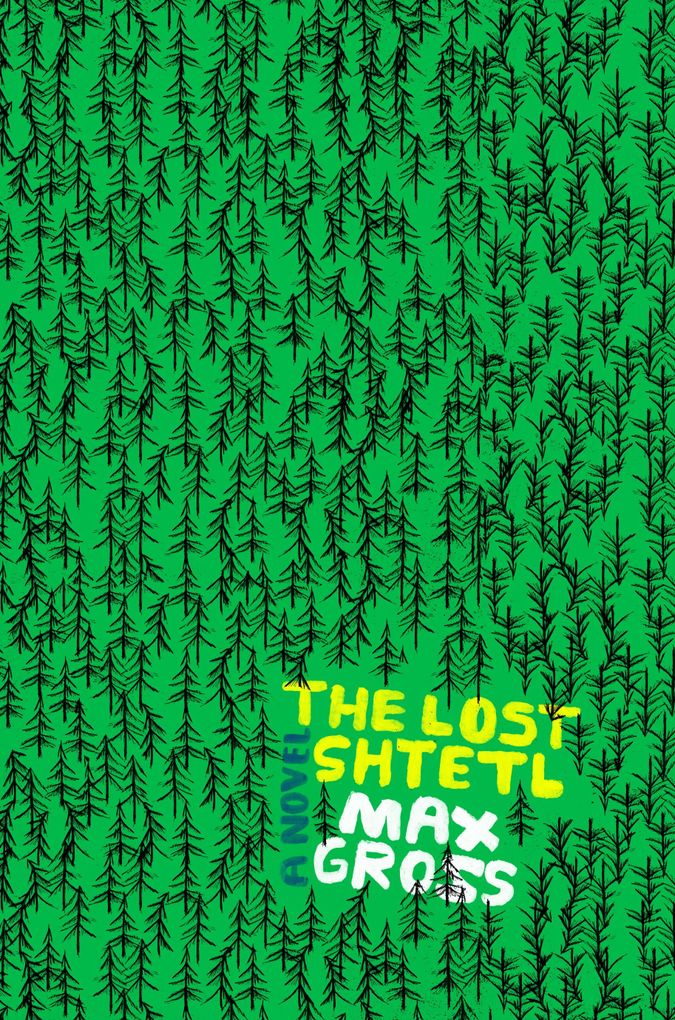 Chelm Two: “The Lost Shtetl” is set in a fictional Polish shtetl. Image by HarperCollins

One of the effects of the pandemic for those healthy and wealthy enough to survive, is the great flattening of human interaction. We don’t go to the cinema, we have Netflix; we don’t have meetings, we have zoom; we don’t see our family, we have FaceTime; we don’t go to synagogues, we have Facebook Livestream. For book readers and book reviewers the flattening can be quite literal. No longer do we exclusively see the comforting spines of our new library, often all we see is the name of the book on the window of our kindle, iPad or PDF reader.

In large part our coronavirus-powered retreat to Flatland deprives us of a richness of experience beyond the imagination. For my journey into “The Lost Shtetl” though, Flatland was the scene of a pleasant surprise. The novel begins in Chelmnik ways that I expected Gross, self-confessed “world-class schlub” and author of “The Mensch Handbook; How to Embrace Your Inner Stud and Conquer the Big City” to continue. That previous memoir was explicitly inspired by Seth Rogen’s “Knocked Up” and I suspected that Gross was once again following his mentor, this time straight into the confines of an early twentieth century pickle barrel.

Fortunately, and fascinatingly, I was wrong. While the publisher’s cries of “Michael Chabon!” and “Gary Shteyngart!” might be overblown, Gross is reassuringly sure-footed as he navigates the three-dimensional minefield of rediscovery. Village politics, Polish politics, inflation, fashion, supply and demand, sex, construction, love and how to explain the Holocaust are all considered in ways that far exceed Rogen’s sad pickle movie.

As Yankel was when he first sees cars, so the Kreskolites are amazed when Yankel returns in a helicopter. They think he, or one of his companions, must be moshiach, flying into town in a magical bird. As he arrives, Yankel feels like anything but the messiah. Barely prior to his return, he has spent months in a mental institution where well-meaning doctors had been treating him for delusions of a lost village.

Gross happily plays both sides of the believability game. On the one hand the technological advances of the world around them are scarcely credible — as one character puts it “the goyim have invented everything!” On the other hand it’s incredible that Kreskol had not been discovered until now: Drunken locals might have missed them, but surely the Nazis would have caught them with their efficiency. Yes Polish bureaucracy was poor, but how could anyone believe the shtetl had escaped a century of rabbinic taxes? 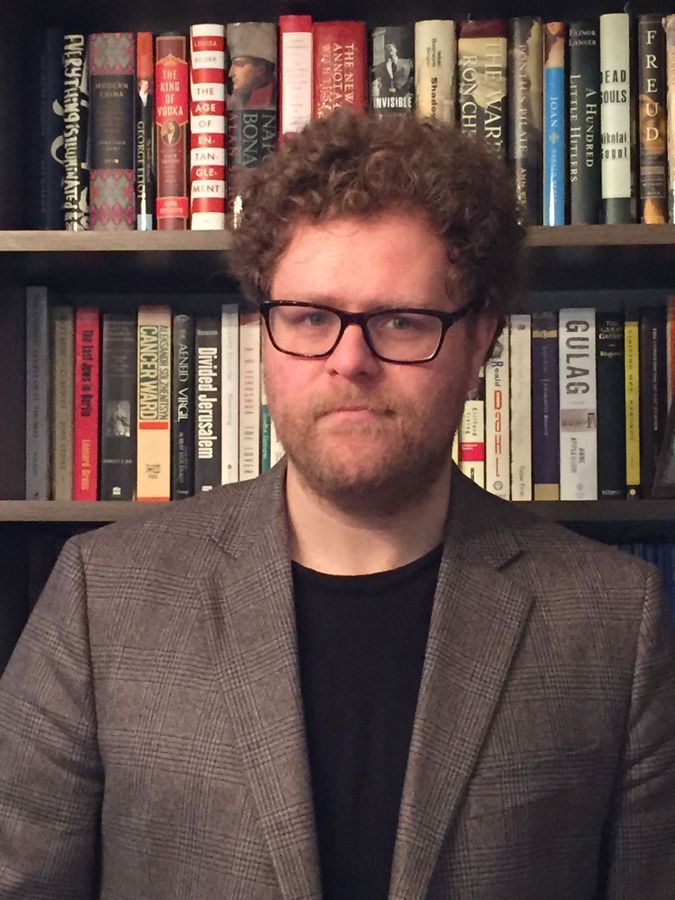 Shelf Portrait: Max Gross is the author of “The Lost Shtetl.” Image by HarperCollins

Gross refrains from making this into a joke, instead citing antisemitic politicians for this allegation. In fact, there is no break in tone, no throwing back of the curtain to have a chuckle. The narratorial perspective seems sometimes to be omniscient and sometimes that of an unnamed villager. There are a number of wry comments made by characters in the text and the playing out of the whole 1920-meets-2020 situation leads to absurd scenarios like an innocent Yankel, saved by a lingerie-clad prostitute, having to explain obscene Yiddish graffiti at the site of an arson attack in Lodz. This is a comedy but, in the way that invites the Chabon and Shteyngart comparisons, no jokes.

Gross uses Chelm at its best, refulgent in its own idiocy but shining a light on the mores of the current day. The angry split between Kreskol’s rabbinic factions, the glut and dearth of American tourists, the ephemeral gentile profiteers, the Israeli sojourners, the bureaucrats, the politicians, the star-crossed lovers, the pious and the practical all move across this strange playing field wryly and metaphorically illuminated. Where will the anachronistic shtetl or the modern state end up? What adaptations, accommodations and rejections will Kreskol’s 19th century cosplaying inhabitants adopt? What will happen to the lovers of this world? The questions lie in Gross’s delightful debut, but the answer is not in Kreskol.

To join the Forward book club in reading “The Lost Shtetl,” email bookclub@forward.com. Our first meeting will be Nov. 4

A Gross tale of traveling to Chelm and back