At 92Y, a quiet coda to an “exhausting” election season 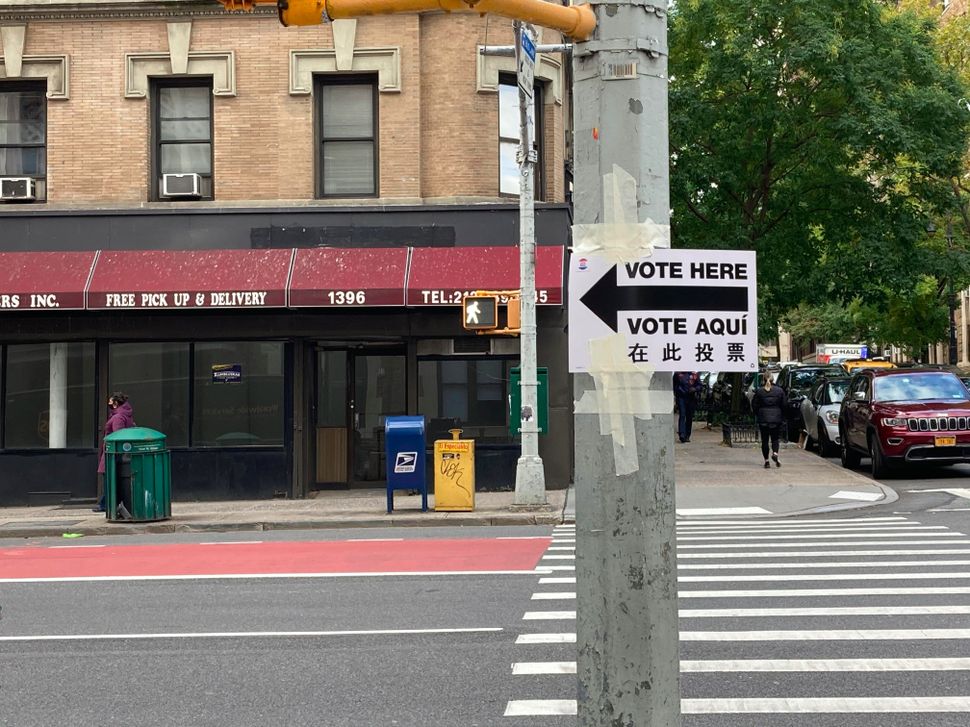 A sign posted near the 92nd Street Y. Image by Irene Katz Connelly

Half an hour before sunrise on Election Day, New York City’s 92nd Street Y opened its doors to voters. About 60 people had already gathered outside, presumably hoping to beat the crowds.

“People are very excited and voting like their lives depend on it,” said Aristotle Rosario, 44, one of the poll workers stationed outside the century-old Jewish community center, which has long served as a polling place.

They needn’t have bothered. For the past week, hours-long lines at polling places have made headlines and dominated television screens. But on Election Day, almost no one had to wait.

The morning was bright and brisk, a sharp contrast to the fickle weather that plagued early voters. Along Lexington Avenue, the tents and tarps that would shelter the evening’s outdoor diners flapped in the breeze. Arriving at 92Y’s Kaufman Building, some voters seemed bemused by the calm, coffee-sipping poll workers waving them inside. On the sidewalk, a security guard chatted with a police officer. One woman stopped to ask directions to the nearest post office. Another waited outside while her partner voted, restraining a very small and very anxious dog determined to enter the building as well.

“Separation anxiety,” she chuckled as a poll worker asked jokingly if her pet would like to cast his own vote.

For poll workers, it was an unexpectedly quiet coda to a fraught and sometimes chaotic election season. Rosario, a fashion designer and visual artist sporting a millennial pink beanie, had never worked an election before. Now, after signing up to serve during what he called “a crucial time,” he’s a veteran. Throughout the early voting period, he’d been stationed at the Upper East Side’s Robert Wagner Middle School, where voters waited as long as six hours, sometimes in the rain, to cast their ballots.

It wasn’t exactly relaxing, but Rosario said he was touched by the energy voters brought to the lines, as well as their thoughtfulness: Many brought snacks, water or coffee for workers too busy to take lunch breaks.

His stint at the polls has left him full of affection for his fellow New Yorkers. “This experience has been life-changing,” he said.

Manning the doors alongside Rosario was Louise Decoppet, 27, an attorney wearing an “I Voted” facemask. She signed up to work the polls over the summer, when she realized that the coronavirus pandemic would keep many elderly election workers at home. During the long days of early voting, she’d felt inspired by the number of people, especially seniors, who cheerfully braved blocks-long lines to cast their votes. “People were very, very committed to voting,” she said. “They were like ‘This is it, I want to do this, I don’t care how long it takes.’”

Though less exciting, the muted tone on Election Day was reassuring. “This is democracy functioning as it should,” she said as a voter breezed through the doors. “This is the way it should look.”

To seasoned poll workers, Election Day might have been something of an afterthought, but the camaraderie of the early voting period hadn’t totally dissipated. Christina Heanue, 37, arrived at the polls wearing a t-shirt that said “Give a Damn” and bearing gifts: several boxes of coffee and goodies from Dunkin’ Donuts. Asked why, she just shrugged. “They’re donating their time,” she said of the election workers inside.

Thorn Weldon, 68, currently lives in Connecticut but took the train to vote on Election Day. Despite the prospect of lines and the comparative ease of absentee voting, she felt it was important to end the “exhausting” election season by casting her ballot in person. “It’s a tradition,” said Weldon, who has voted in New York City, her “hometown,” since she was 18. “You can feel the buzz in the air.”

But Weldon was departing from tradition as much as she adhered to it. A once-staunch Republican who voted for Hillary Clinton in 2016, she cast her 2020 ballot for Joe Biden. “I’m a bit frightened,” she said. “The Republican party isn’t my party anymore.”

Even those who weren’t casting their votes seemed eager to broadcast the fact that they’d done their civic duty. “I voted” stickers decorated many a peacoat or puffer jacket. (A few were plastered to the sidewalk as well.) A passing woman wore a mask emblazoned with images of Ruth Bader Ginsburg’s face. Another bore a simple plea: “Vote!” When Rosario, leaning against one of the metal barricades stationed (unnecessarily, it seemed) outside the building, called out, “There’s no line to vote,” one man reassured him he’d already voted by mail.

Others preferred to keep the ritual a private one. Exiting the building, one voter shook her head when poll workers asked if she got her sticker. “It’s always important to vote,” she said simply. “But today, more than ever.”

At 92Y, a quiet coda to an “exhausting” election season