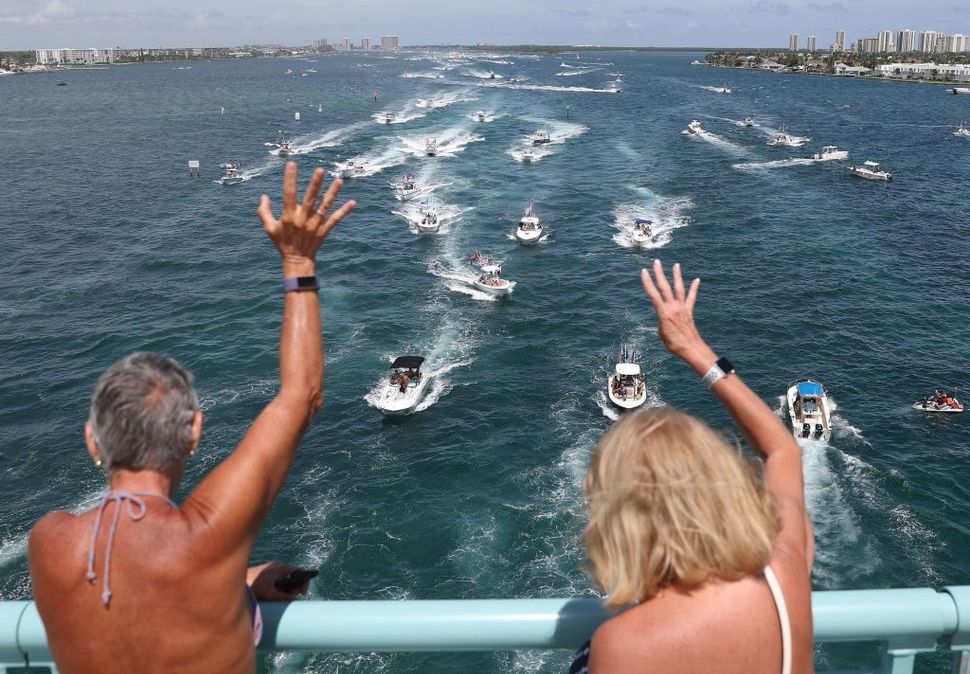 People wave as boaters show their support for President Donald Trump during a parade down the Intracoastal Waterway to just off the shore of President Trump’s home at Mar-a-Lago on September 07, 2020 in West Palm Beach, Florida. Image by Getty Images

Lots of people want to talk to Rochelle Tan. The 83-year-old votes in Palm Beach County, Fla., a swing region in a swing state that could help decide who wins today’s presidential election. The Democratic and Republican campaigns have been dialing her number all fall.

“When I see who’s calling, I don’t even bother answering,” Tan said. “I’m not interested.”

But there’s one person whose calls she always takes — her granddaughter, Jamie Nadler. And that’s true even when Nadler calls to talk politics, like she did a few weeks ago on behalf of IfNotNow.

“I enjoyed it,” Tan said. “I always enjoy talking to her.”

That was what IfNotNow was counting on when they began training their members to call family in Florida this fall.

The Jewish Democratic Council of America, the Republican Jewish Coalition and Bend the Arc have tallied over 3.4 million calls and texts to Jewish voters this cycle. IfNotNow volunteers have made a comparatively modest 59,000 calls, half in Florida and the remainder to voters in Texas and Pennsylvania, where the group has endorsed down ballot candidates.

“We’re not trying to make a tremendous impact, that’s another organization’s role,” said Jeremy Oziel, an organizer with the group. “But we can take responsibility for our community and our families in this election.”

With that in mind, IfNotNow decided to teach its members how to have strategic conversations with their parents and grandparents who live in Florida, a target for the presidential race, based on new voter outreach research around “deep canvassing” that has been shown to sway voters.

One problem with traditional phone banking is that most people don’t answer the phone — just like Rochelle Tan. And even when they do, research shows that undecided voters are virtually never persuaded by a volunteer.

“The fact-based, one-way conversation really tends to have no effect on changing people’s minds in partisan general elections,” said Josh Kalla, a political scientist at Yale.

Kalla is part of a small group of academics who have pioneered research into deep canvassing, which involves a volunteer sharing a personal story about a contentious political issue and listening to the voter’s views without judgement. It has been shown to win over 5% to 10% of voters, an unprecedented number in campaign outreach, according to his research.

IfNotNow, which primarily focuses on opposing the Israeli occupation, began running deep canvass training in late September. The 239 people who attended were armed with a five-page conversation guide meant to steer relatives toward signing the group’s pledge to oppose President Donald Trump, fight ring-wing antisemitism and volunteer to call voters themselves.

The guide doesn’t provide a traditional script. Instead, it asks the caller to recall a moment during the last four years that made them “feel powerful or powerless as a Jew” before eliciting their family member’s story and then segueing into an attack on Trump and the GOP.

This method appealed to Ellie Cooper, who said typical phone banking can feel rote and transactional and that political conversations with family members often focus too much on abstract political ideals.

Cooper spoke with her parents and brother about a formative experience from her time at Florida State University when she attended a gun violence rally outside the state capitol in Tallahassee.

“There was a rabbi speaking at this demonstration about the Jewish obligation to act and the sanctity of life,” Cooper said. “That moment gave me imagination and vision around what it means to show up Jewishly and push Florida forward.”

Preaching to the choir

IfNotNow decided to encourage members to talk to their family rather than strangers in part because the organization’s goal was to move Jewish voters, according to Oziel. But one challenge this posed was that, in an election cycle when Joe Biden is polling over 70 percent with Jewish voters in Florida, many Jewish families are already on the same page.

Tan said that she hadn’t talked to Nadler about politics much in previous election cycles but that they found themselves aligned this year.

“We actually really feel the same about the political parties,” Tan said.

Nadler said she used the conversations to ask if her grandmother had a voting plan, and whether her friends were also supporting Biden. They talked about the pandemic and how their lives have changed, and about the stakes of the election.

While Nadler didn’t move a relative out of the Republican column, her conversation was still a success according to Oziel’s rubric. He acknowledged that many of those IfNotNow trained in deep canvassing spoke with Democratic family members and said the project’s goals went beyond the presidential race.

“We were also trying to get people to move along the political spectrum,” Oziel said.

Nadler knows that family members can be especially effective at this. Over the years, she has influenced both of her grandmothers’ views on issues like feminism and the environment.

And she knows Tan takes her opinion seriously.

“Every time I talk to her she tells me that I’m the only reason she recycles,” Nadler said.