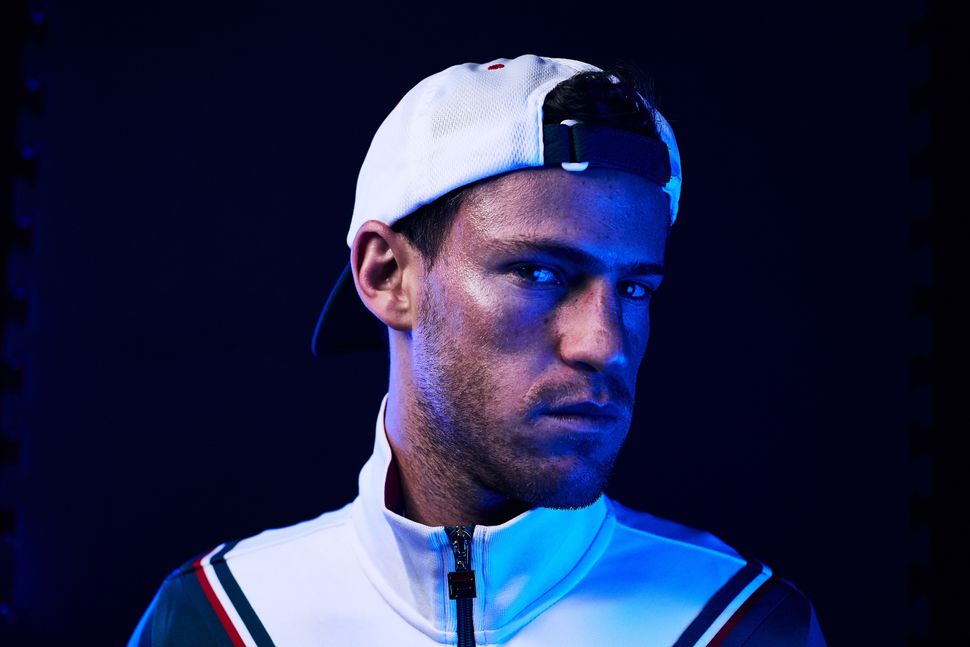 9th in the world: Diego Schwartzman has his sights trained on the top echelon of tennis. Image by ATP Tour

Tennis has a few improbable stories — like Richard Williams teaching his daughters Serena and Venus to play on public courts in Compton, California. Or Novak Djokovic dodging bomb-cratered blocks in Belgrade, Serbia in order to get to his practices during the NATO assault on his country in the late 1990s.

Or, consider the saga of the Argentinian player Diego Schwartzman, currently the ninth ranked men’s tennis player in the world, and now playing in the ATP finals in Paris. He’s the great-grandson of a Polish Jew who had been crammed with others into a cattle car en route to a concentration camp during the Second World War. (Luckily, the coupling broke apart, leaving his car behind at a station as the rest of the train rumbled onto to its final destination; he jumped off the train and fled, eventually finding the money to book passage on a ship bound for Argentina with his family.)

Great grandpa – Diego doesn’t know his name, nor any Yiddish, which was his ancestor’s only language when he arrived in Buenos Aires – was part of a wave of European Jews and fleeing Germans who arrived in Latin America between 1933 and 1945. The United States Holocaust Memorial Museum estimates that approximately 84,000 documented European refugees arrived in Mexico and parts south during those years.

“We know that many more Jewish refugees arrived illegally,” said Adriana M. Brodsky, a history professor at St. Mary’s College of Maryland. The immigration policies of most Latin American countries, and ofArgentina in particular, were more generous in the years before and during the Second World War than those of Canada, England and the United States, which had adopted severe restrictions on immigration in the 1920s, according to Raanan Rein, professor of Latin American and Spanish History at Tel Aviv University. He added that it also was easier to cross Argentina’s borders illegally than those of the Anglo-Saxon countries. Bribes and forged documents were more readily accepted.

The Jews of Argentina formed a reasonably tight community. The Jewish population in Buenos Aires is the largest in all of Latin America, the third largest in the Americas, and the world’s seventh largest outside Israel. Three generations later, Diego Schwartzman, who was born in 1992, almost 50 years after his great-grandfather’s escape from the Nazis, grew up in what he calls a “big Jewish community in Argentina. My friends, everyone, is from the community of Jewish people. I mean, a lot of my friends and a lot of people that I know since I’m really young.” 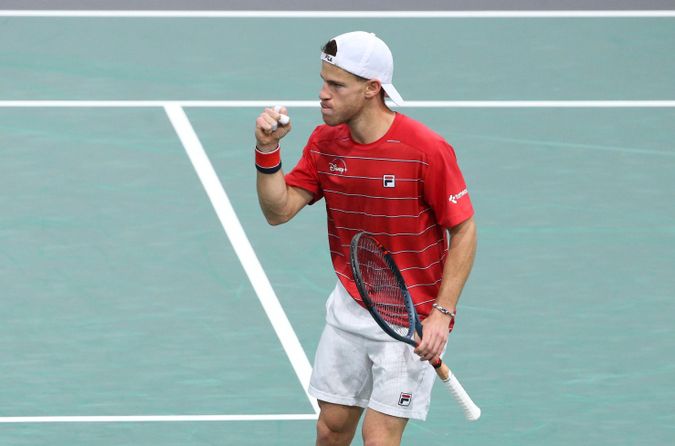 In that community were many others whose families had escaped from Europe at the same time as his great-grandfather. “Everyone had a story,” Schwartzman said in a phone interview. “Yeah, many people as well and friends of my mom and my dad, the grandparents of them have a lot of histories.” Also in Buenos Aires and elsewhere in Argentina were the children and grandchildren of Nazi officials and sympathizers who had fled Germany for South America as the war was being lost, but Schwartzman didn’t run across them, or the subject of when and how they came to Argentina didn’t come up.

In time, the Schwartzmans acclimated to their new home. Yiddish disappeared, replaced by Spanish and a prayer or two in Hebrew that his mother and siblings still say on Jewish holidays, which the family continues to observe. Diego and his older siblings, two brothers and a sister, all attended Hebrew school and celebrated their bar and bat mitzvahs. His mother just “understands a few words in Hebrew, because of the traditions and everything, but not more than that,” Schwartzman said. “My brothers as well. They understand a little bit of Hebrew, but just a little, maybe a few words but not much.”

Schwartzman has worked a bit harder at learning English, largely from necessity, as he has been traveling to international tournaments since he was 16. “I was traveling around the world, sometimes alone,” said Schwartzman. “And I have to figure out how to speak in English and fix many problems when I was in airports or different situations, so I started to speak. And then, I have a lot of interest to speak, because I’m a social person. I need to improve. I mean, I can speak, but sometimes it’s not in a good way.”

Schwartzman said that, in his family, there was a drive to succeed – one of his brothers is a computer programmer; the other is a travel agent, and his sister practices law. Sports were encouraged While his siblings were more academically inclined, Diego showed early promise in sports, first in soccer (futbol) and then in tennis. He played matches at area clubs starting at the age of seven. He was named after Diego Maradona, the Argentinian soccer great, but his own idols in the tennis world were Argentinian players Pablo Albano, Guillermo Coria, Gaston Gaudio and David Nalbandian.

“I think I followed the career most of Nalbandian, because I really like how he played,” Schwartzman said. Nalbandian, who is 10 years older than Schwartzman, made the finals at Wimbledon in 2002 and reached No. 3 in the world in 2006.

As a youth, Schwartzman played tennis at Club Náutico Hacoaj, a Jewish sports club in Buenos Aires that was established by and for Jews who were not allowed to join other sports clubs in the city in the early 20th century.

Raanan Rein noted that “there were more social, cultural and sports clubs in the U.S. that would not have Jews as their members in the 1930s and 1940s than in Argentina. But there has always been an antisemitic current in Argentina (as elsewhere), especially among the elites. While Jews successfully entered Argentine soccer from its early stages, it was more challenging for them to enter elite sports, such as tennis.” He added that antisemitism arises in the realm of athletics more “when it comes to team sports, and especially national teams, less so when it comes to individual sports, such as tennis.”

Into the 1960s and ‘70s, there continued to be places where Jews were not allowed, a remnant of Argentina’s history of nationalism and fascism in the first half of the 20th century, but those restrictions disappeared by the 1980s and ‘90s, according to Silvia Berger, an Argentinian-born professor of Latin American literature and culture at Smith College. Still, she said, “antisemitism is dormant until something wakes it up.”

Schwartzman is by no means the only Jewish player on the tour. Denis Shapovalov, a 21 year-old Canadian player who was born in Tel Aviv, is currently ranked No. 12 in the world, while Israeli player Dudi Sela (228 in the world) and Americans Noah Rubin (243 in the world) and Madison Brengle (93 in the world) have a long list of accomplishments.

Diego first encountered antisemitism in the form of catcalls at tournaments in his career. They happened, he said regardless of whether he was winning or losing. “My father or my mom would fight people outside the club because someone said something. But yeah, it’s always around. It’s sad when it’s happening,” he said.

As he rose in the professional rankings, he says he has experienced less antisemitism, though it hasn’t completely disappeared. At the U.S. Open in New York, one of the premier events in the tennis world, he remembers being on a practice court in 2017 before his first-round match. “We were warming up, and one guy from the crowd said something about how Jewish people are not allowed here, or something like this,” he said. “I just stopped warming up and I asked if these people can go out, because it’s scary.”

Perhaps more annoying to him than being subjected to anti-Semitic insults is when people call him short (he is 5’7”). Schwartzman’s nickname back home is El peque, a shortened form of the word pequeño, which means “Shorty” in Spanish. “I think I’m normal,” he said, “totally normal. But maybe for tennis right now at this time, yeah, I’m short. It depends on the country, but when I’m walking in the city I’m totally normal.” Having long limbs does increase the sharpness of the angle of one’s serve, also providing greater clearance over the net, and the generous amount of topspin that so many of today’s players apply to their ground strokes increases how high balls bounce on the court, favoring the players who can return shots comfortably. Many of the top players on the men’s professional tennis tour are over 6 feet, including Rafael Nadal and Roger Federer, and quite a few of the top women players also have reached or exceeded 6 feet in height whereas a generation or so ago, most of the top ranked players were well under 6 feet.

Still, though Schwartzman may be competing with comparative giants, his current No. 9 ranking in the Association of Tennis Players suggests that size isn’t everything. He has won major tournaments in Istanbul (2016), Rio (2018) and Los Cabos, Mexico (2019), and he has reacxhed the fourth round twice at the Australian Open and the quarterfinals twice at the U.S. Open. Perhaps, the highlight of his career was beating Rafael Nadal in the quarterfinals of the Italian Open this past September, his first victory over the Spaniard in 10 meetings (Nadal did beat Schwartzman in straight sets just a few weeks later at the French Open).

“I think it was a big step for me,” he said. “It was a big goal that I had from many matches before. Many matches I was close against the three big guys in tennis — Roger, Nole, Rafa. And when I finished the match I said, OK, I did it. So, it was very, very important for me, I think in my mind and my career, everything changed at that time because it’s a big step. And then, after Rome, I went to Paris and I did great, and I played against Rafa again in the semifinal in Paris. So, I think it was, yeah, I think it was the best match of my career, yeah.”

“Every year, I’m setting my goals for the next year, and I’m achieving a lot of goals that I’ve set,” he said. “Right now, I think my goal is just trying to be in the top 10 for the rest of my career, for sure. But, maybe by the end of the year, I will need to refresh the goals that I had set a few months ago. Maybe even higher.”