Why the mayor of Ramallah does it all 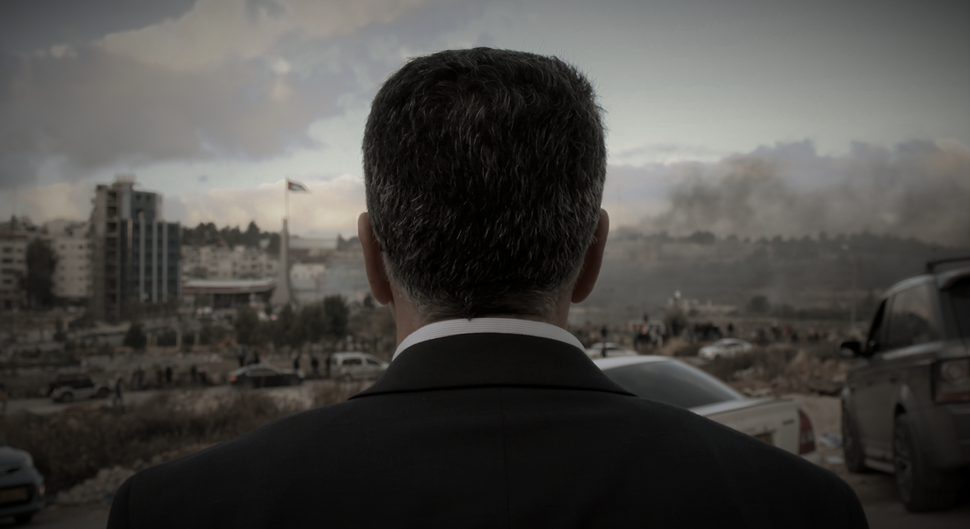 A still from David Osit’s film ‘Mayor.’ Image by Courtesy of David Osit

Musa Hadid, the middle-aged, mustachioed and overextended mayor of Ramallah is meeting with staff to discuss a Christmas tree lighting. Among the details to be ironed out: several Santas rappelling down buildings, a flash mob and zeppelins.

Well, not really zeppelins. An aide suggests that this word sets up expectations that would be tough to meet. “Balloons!” he insists, “They’re all just balloons.”

This scene, which arrives early in David Osit’s documentary “Mayor,” about Hadid’s daily life as a municipal leader in the major Palestinian city, sets the stage for the many upset expectations that go along with his work. While Hadid makes rounds inspecting doors at a local school, debates his city’s confusing brand identity and puts out literal fires, he is hamstrung by forces he can’t control.

In other words, he can promise his people zeppelins, but he can never deliver them.

Ten miles from Jerusalem, Ramallah is hemmed in by Israeli settlements. The Israeli government won’t allow the city to build essential infrastructure like a sewage treatment plant. With West Bank protests brewing after President Trump recognized Jerusalem as Israel’s capital, IDF soldiers march across the border and Hadid must consider dimming the Christmas tree, deemed a threat to the city center’s security.

When someone suggests lighting the tree up with the words “Jerusalem is our capital,” Hadid stops her, insisting, “Our role is to provide municipal services first, then political messaging.”

Remarkably Hadid, as circumspect as he is, becomes more politically emboldened as the film goes on and the interference of the occupation becomes more apparent and violent. As it happens, he keeps his head and his sense of humor amid a flurry of absurdity that would feel at home in an Armando Ianucci series. Even Hadid’s rare downtime — playing a keyboard at home — is later revealed to be his personal score for a new fountain outside City Hall. What to name the fountain is given its own scene with pitches suggesting “the City Hall Fountain” or “The Fountain of Love.”

The dysfunction of Hadid’s job — he learns of Trump’s announcement from a staff member; the office TV isn’t hooked up to cable or satellite — flecks the character study with dark comedy. It is at once entertaining and gutting, knowing the helter skelter nature of his office isn’t, as in “Veep” or “In the Loop,” fueled by government waste or incompetence but an indifferent to hostile relationship with the city’s neighbors to the east and a dearth of support from much of wider world. (A recent Washington Post fact check reported that Palestinians as a whole have on average received less than twice as much aid from the U.S. as Israel since the Oslo Accords.)

“I feel jealous when I visit other cities,” Hadid tells Osit, in the film’s one instance of direct address to the camera. “There’s so much they can do that we can’t. Not because we don’t want to, it’s just not in our hands.”

You can rent “Mayor” virtually from Film Forum.

Why the mayor of Ramallah does it all