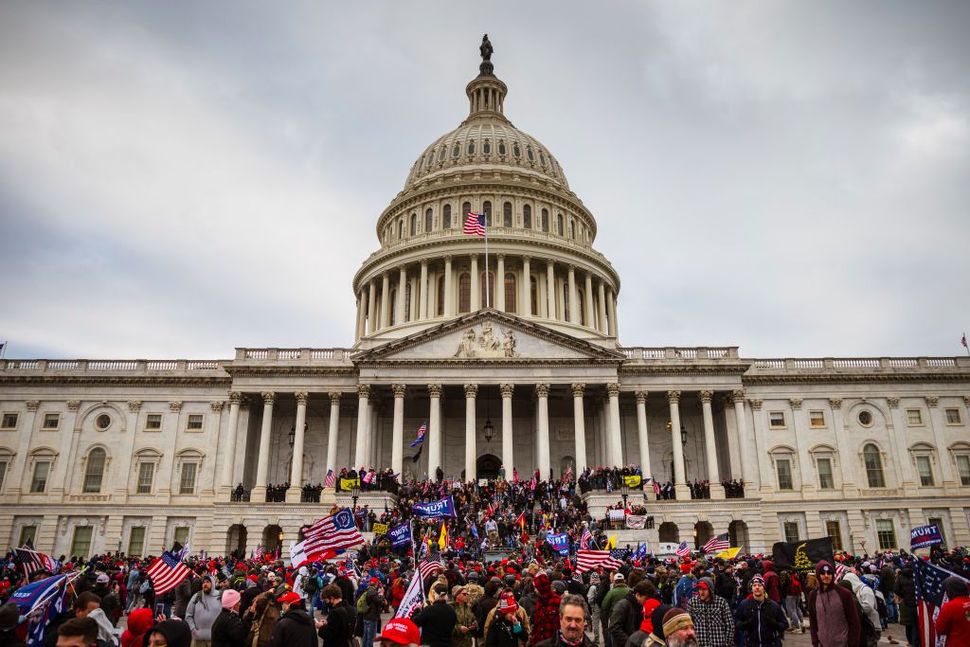 Among the horde of far-right extremists who breached the U.S. Capitol on Wednesday afternoon, one man wore a hoodie that probably looked a little familiar.

Featuring an arc of utility-chic font atop a simple graphic, it mimicked a ubiquitous sartorial trend: the destination sweatshirt that advertises summer camps or vacation hot spots. You’ve probably seen hundreds of hoodies like this. You might even own one.

Except, not quite. The font on this sweatshirt spells out the name “Camp Auschwitz.” The graphic is a grinning skull. Beneath is the motto “Work brings freedom,” a clunky translation of the death camp’s infamous motto, “Arbeit macht frei.”

It’s unclear where the sweatshirt originated, but within hours of the riot, as pictures circulated on social media, copycat versions appeared on e-commerce platforms that allow users to design custom merchandise. Some such websites quickly removed the designs, but others have been slow to act. As of Friday afternoon, the company TeeHands listed three separate “Camp Auschwitz” sweatshirts, with one post including a picture of the original, unidentified wearer.

Think about the level of confidence, entitlement and hate this person feels, and how comfortably an environment was created, to openly and brazenly wear this. pic.twitter.com/hiRm6d7JLM

There was plenty of horrible garb on display during Wednesday’s riots and the many far-right rallies that preceded it. In December, the ADL reported that Proud Boys in Washington, D.C., were wearing t-shirts emblazoned with the initials 6MWE, short for “Six Million Wasn’t Enough.” Still, the “Camp Auschwitz” sweatshirt seemed to grab exceptional attention. On social media, the sweatshirt emerged alongside chilling photos of Confederate flags waving in the Capitol building as a hallmark image of the day’s unprecedented events.

Why the instant notoriety? Observers may have been reacting to the eeriness of seeing an awful idea expressed through an object whose positive associations are immediately recognizable to broad swathes of Americans. The vacation hoodie, in its many iterations, tends to evoke athletic pursuits and bodies of water. It conjures up the in-group satisfaction of belonging to a specific camp or summering at a particular watering hole. It testifies to the wealth and resources necessary to achieve any amount of leisure time in this country. The idea of the “American summer” may be a bundle of fantasies that few people actually experience, but this garment still encapsulates it.

For Jews, antisemitism can be more striking and frightening when expressed in this format than through hard-to-decode slogans like 6MWE. But it’s also reflective of a broader far-right strategy of packaging hate in familiar, palatable styles. This isn’t the first time that extremists have used well-known tropes to make their principles seem accessible and appealing to potential recruits.

Ivanka Trump did something similar with a now-deleted tweet that referred to Wednesday’s rioters as “American Patriots.” Linking those who laid siege to the Capitol to the nation’s founders, she capitalized on a much-romanticized period of history to categorize the mob’s actions not as a threat to our democracy, but the fulfillment of its ideals.

Likewise, QAnon ideology has spread on Instagram through influencers who use cool-girl color palettes and wellness lingo to disseminate misinformation. Vox has reported that Instagrammers have repurposed infographic slideshows, often used to explain social justice topics, to gain a mainstream audience for the movement’s conspiracy theories.

Even before the rise of QAnon, “trad wives” concealed white nationalist messaging behind cheerful YouTube videos about gardening and home improvement.

“If you’re able to make this covetable, beautiful aesthetic and then attach these conspiracy theories to it, that normalizes the conspiracy theories in a very specific way,” Stanford doctoral student Becca Lewis, who specializes in online politics, told the Atlantic for an article on QAnon and Instagram.

The “Camp Auschwitz” sweatshirt isn’t covetable or beautiful in any way. Even in the midst of a day full of shocks, it immediately stood out. But it is the absurd endpoint of extremism that disguises itself in styles we enjoy — or which simply seem too familiar to merit closer examination.

At the beginning of the Trump Era, it was common to lament that Americans were too partisan even to agree on a common set of facts. Now, as some politicians falsely blame antifa for yesterday’s events, that maxim seems more true than ever.

And with bad facts cloaked in appealing aesthetics, it can only become more difficult for Americans to decode the misinformation proliferating around us.