‘Dara of Jasenovac’ is the first feature-length narrative about the death camp – but is it trying to score political points? 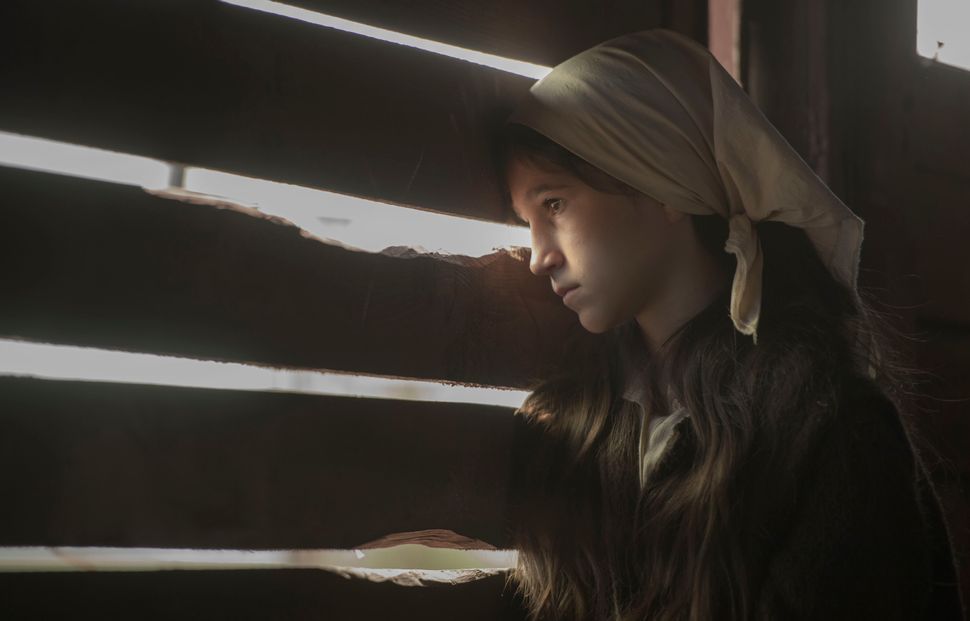 Serbia’s submission for the Academy Awards, a Holocaust film called “Dara of Jasenovac,” has nearly 500 rave reviews on IMDB. All are from the last seven days and presumably from Serbia, where the film won’t be released until April. It’s safe to assume that most of the reviewers, part of a push in the Balkan state to boost the film, haven’t seen it.

The reason for the chorus of coordinated acclaim — with subject lines like “The real story,” “The biggest genocide” and “The truth will defeat the devil!” — is one of the few people who has: A critic for Variety named Jay Weissberg. Since publishing his Jan. 25 review, which called the film “an undisguised piece of Serbian nationalist propaganda,” Weissberg has been flooded with abuse.

First came the broadsides from the Serbian state media. After that came the right-wing bots on the website of his film festival, which hurled antisemitic invective his way while also tarring him as a Holocaust denier paid by the Croatian government. Weissberg says he’s received death threats for his reviews of international films in the past, but has never been directly in the crosshairs of a government minister. He noted a sad irony: The Minister of the Interior, the man he says directed the campaign against him, was close with the widow of Serbian dictator Slobodan Milošević, a man indicted on charges of genocide in the Yugoslav Wars.

“This is a man who has certainly condoned a genocide who is turning around and calling me a Holocaust denier,” Weissberg said.

Weissberg believes that “Dara of Jasenovac” fits into a Serbian trend of exploiting the memory of Jasenovac, the infamous death camp operated by the Croatian fascist Ustaše government from 1941 to 1945, to advance contemporary political ends. It’s a trend that, in the not so distant past, was used to justify aggression and even war crimes.

“For me, the film is very much using the Holocaust to reinforce current Serbian nationalism,” Weissberg said.

For decades, the Serbian government has been trying to show the wider world the awful reality of the Holocaust in the Independent State of Croatia, a Nazi puppet regime. The story of Dara, a 10-year-old Serb who witnesses horrific acts of murder and indoctrination perpetrated by the Catholic-Croat state at the Jasenovac subcamps, where tens of thousands of Serbs, Roma and Jews were killed, appears to be the first feature-length fiction film to depict these events. Its terms are often grisly and sentimental and seldom historically illuminating or character-driven. But the film’s tropes, and the reaction to bad press, is nothing new from Serbia, which continues to have a troubled relationship with Croatia, marred by a backward-looking view of atrocities on both sides.

“It’s part of the narrative that the world is indifferent to Serbian suffering,” said Jovan Byford, author of the book “Picturing Genocide in the Independent State of Croatia,” published by Bloomsbury Academic. “It’s this idea that Serbs have created a film that finally shows their suffering to the world. Immediately, when there is a silencing of any Serbian voice out there by critics and by the media, it feeds into this very familiar narrative. And obviously the reaction is resentment.”

Byford, who was born in Serbia to a Serbian mother and British father and left for the United Kingdom in 1991 when the Yugoslav Wars broke out, is cited in Weissberg’s review. Seeing his name, a producer on the film reached out to him for his comment. He demurred, having, like most who have weighed in, not seen the film himself. Byford said that Weissberg must have read his work on Serbian propaganda and recognized its patterns — of focusing atrocity, leveraging victimhood and using it to justify prejudice and expansionist goals — in the film.

The dream was to make a Serbian “Schindler’s List” with the help of Steven Spielberg himself.

Propaganda that exploits the Holocaust to fuel fear and nationalism has long been a feature of Serbian culture, present in some fashion since the 1940s. A more globally- and PR-minded form emerged in the early 1990s during the breakup of Yugoslavia, as Serbians attempted to share the horrors of Jasenovac beyond their borders, including at the UN. The dream was to make a Serbian “Schindler’s List” with the help of Steven Spielberg himself. According to Byford’s work, the efforts to shed light on Jasenovac on the world stage continued well into the 21st century as Serbia tried to shame Croatia amid diplomatic breakdowns and, most importantly, to repair its own reputation for its role in the Bosnian genocide. Byford believes that “Dara of Jasenovac” is probably in the same vein as these efforts.

“The way that it’s framed in the media, it fits entirely into this view of the priority being to showcase suffering to the international audience,” Byford said. “People in Serbia know what happened, they don’t need to see the film, but it is those in the West who finally need to see the film and correct their views of the Serbs and realize that Serbs are not the bad guys of history. That they are the victims rather than the perpetrators.”

The charge of propaganda rankles the film’s executive producer and historical consultant, Michael Berenbaum, the eminent Holocaust historian and director of the Sigi Ziering Institute at American Jewish University. Berenbaum emphasized that this was the first such movie Serbs would see about this period. He says the film is a corrective to a contested history, often challenged by Croatia, and that Weissberg’s charge that the film is nakedly anti-Catholic or anti-Croat is “nonsense.”

Berenbaum stressed the film’s fidelity to facts, following his advice to director Predrag Antonijevic not to manufacture drama but rely on testimony, which itself is dramatic enough.

Early in the film, an Ustaše officer, entertaining a visiting Nazi officer, oversees a game of “musical chairs” where the inmate left standing has his throat slashed by an odd-looking bladed glove. Berenbaum says that this incident was based on survivor testimony and that it was actually much worse in real life — the victims were children.

Byford was unfamiliar with the musical chairs slaughter, but well acquainted with the glove, which he called a popular showpiece of Jasenovac’s “iconography of horror.”

“They called it the ‘Serb cutter,’” Byford said, noting a legendary provenance: That it was made from the specifications of Croat dictator Ante Pavelić for the express purpose of killing Serbs. “In fact what it is was an agricultural instrument that was used in Germany. It was a sheaf cutter.”

For Byford, the glove, often used in displays on the camp, is indicative of a certain trope delivered directly after its use in the film. On seeing the killing — during which members of the camp staff sneak off to a car to have sex while watching — a Nazi visitor immediately throws up. His superior then walks to his side and says simply, “Welcome to the Balkans.”

“The idea of the Nazis being horrified by the Ustaše is also a complete cliché,” Byford said when I mentioned the moment. “In some sense it feeds into this whole idea of Jasenovac being worse than Auschwitz, and therefore the Serbs have actually suffered a lot more than Jews, because their suffering is not just the numbers, it’s about the brutality of the means by which they were killed.”

Byford said he can’t contest all the events in testimony that support this view of Croatian savagery, but adds that interrogating it at all in Serbia is tantamount to denial.

The fact that there is a long history of denial coming from Croatian officials is all the more reason why Berenbaum thinks “Dara” is an urgent film.

“While Serbs may want to reclaim their own history, there are many others – including Croatia’s post-communist President Franjo Tudman — trying to minimize what happened at Jasenovac to escape responsibility and accountability,” Berenbaum wrote in an as-yet-unpublished letter to the editor to Variety he sent to me.

When asked, though, he agreed that Serbia hasn’t been accountable itself for its own more recent complicity in the ethnic cleansing of Bosnian Croats and Bosniaks, a Muslim minority native to Bosnia, in the 1990s.

“You’ve got to be careful not to use as justification for your behavior that you were victimized before,” Berenbaum said, but maintained that the director, Antonijevic, was not politically motivated.

“If you think it’s political, that’s you bringing it to the story.”

“The accusation in working with this material is very often that you’re doing it for a political purpose,” he said. While Berenbaum couldn’t rule out the idea that someone involved in the film may have had an agenda, he argued the work itself avoids contemporary politics. “They told the story. And if you think it’s political, that’s you bringing it to the story.”

Stefan Ivančić, a Serbian filmmaker and producer, agreed with Weissberg’s review’s charge of politics. The reaction within the country — from the campaign to goose its IMDB score to a torrent of negative media coverage on the Variety review — says it all.

“When you have the Minister of the Interior ‘defending’ a film from a film review, that’s a sign that something isn’t right,” Ivančić said, “That doesn’t happen in a democracy. To me, that’s the final proof there’s a propagandistic agenda behind it.”

Berenbaum called the Variety writeup “a kick in the gut,” stressing that the film’s story, of the only death camp established by non-Germans, was a history in need of a wider audience. An Oscar nomination would be a way to attract a larger crowd to the project and he believes the review, from a widely-read film industry publication, hurt its chances entering awards season.

On Thursday, the LA Times published its own review of the film, levying Weissberg’s same arguments. The pan called it “baldly nativist and manipulative” and a cynical entrant for the Oscars, concluding that the film was “One more regrettable sign that for some, the path to awards and respectability — and, seemingly, effective messaging against a neighbor — goes through the Holocaust.”

Ivančić, one of the few Serbians who has seen the film, doesn’t like its chances.

“I would love it if this, or any film from my country, would be the greatest film ever and we go and win an Oscar,” Ivančić said. “I would be proud of my country and the people who live here. But in order for that to happen, we need to think collectively, and not use the suffering of people to pursue private or nationalistic interests.”