UFOs are back in the news. An image of a flying saucer by the artist Peter Coffin. Image by Getty Images

Through some weird confluence of circumstances, UFOs are back in the news. Maybe the events of the past couple of years have led people to look elsewhere, to the skies, for meaning. Maybe the renewed interest in alien visitations to our planet is a form of escapism, especially as we seem to be mucking this one up in a fast and furious manner.

Or maybe it’s just time for a close encounter of the fifth kind, wherein humans and extraterrestrials make direct contact. (There are seven kinds of encounters: the fourth is human abduction, the sixth is an attack on humans, the seventh is the creation of an alien/human hybrid, which might explain Kim Kardashian.) If and when contact occurs, there will be a number of rabbis lined up to explain how this was all foretold in the Bible.

In the past week or so, The New York Times has run at least two articles on UFOs. About a month ago, the New Yorker ran a long-form piece reviewing the history of the search for UFOs. In a recent interview, former President Barack Obama — who presumably had access to the most secret governmental dossiers about alien visitations — said, “What is true, and I’m actually being serious here, is that there are, there’s footage and records of objects in the skies, that we don’t know exactly what they are. We can’t explain how they moved, their trajectory. They did not have an easily explainable pattern. And so, you know, I think that people still take seriously trying to investigate and figure out what that is.”

Last year, former CIA director John Brennan told a podcast that UFO sightings might be “some type of phenomenon that is the result of something that we don’t yet understand and that could involve some type of activity that some might say constitutes a different form of life.” And just last month, the Department of Defense’s (DoD) Office of Inspector General said that it will conduct evaluations into the “extent to which the DoD has taken actions regarding Unidentified Aerial Phenomena,” a move spurred by several UFO sightings by U.S. military forces over the past year. (Presumably they were told to set their phasers on stun.) A Congressional inquiry into UFOs is expected to release a report in late June. 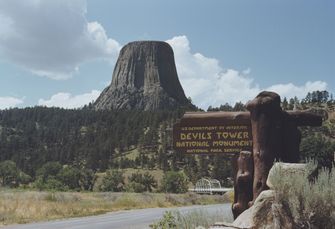 We Are Not Alone: Devil’s Tower proved to be a key point for contact with extraterrestrials in the Steven Spielberg film ‘Close Encounters of the Third Kind.’ By Getty Images

A decade ago, the Forward ran a short piece entitled “Putting Israel’s UFO Frenzy Into Historical Perspective,” after videos surfaced purporting to show UFOs hovering over the Jerusalem skyline. Unidentified flying objects are no stranger to the Holy Land. The Bible is full of accounts of sightings of heavenly beings. Indeed, a cornerstone of Jewish liturgy is the line from Psalms 19:2 — “The heavens declare the glory of God” —- which some sages read to mean that we earthly inhabitants are not alone among the creatures in the universe who praise Hashem.

Contemporary rabbi Benjamin Blech once wrote, “What is fascinating … is that a significant body of opinion in traditional sources not only validates the possibility for alien life on other planets but actually finds biblical and midrashic confirmation for this view, even as it suggests that belief in an all-powerful God forbids placing any limitations on the extent of his creative powers.” In other words, a strong belief in an omnipotent God cannot logically exclude the possibility of other worlds populated by other creatures.

Blech’s colleage David Weintraub, professor of astronomy at Vanderbilt University and the author of “Religions and Extraterrestrial Life: How Will We Deal With It?,” posits that Jewish theology may actually require a belief in extraterrestrials since there are no limits on the power of the creator. He writes, “[F]or Jews to say that no life beyond the Earth could possibly exist would be unacceptable, as such an idea would appear to place shackles on God’s creative power. The universe belongs to God and God can do what God wishes to do with the universe.” (According to the Jewish sage Albert Einstein, God draws the line at playing dice.)

Ezekiel’s vision of a merkavah, or chariot, the foundation of a whole school of kabbalistic thought called Merkavah mysticism, is perhaps the best-known Bible story that can be read as an account of a close encounter. The chariot was driven by “a likeness of a man,” which many read to be God, since humankind was made in God’s image. The four-wheeled vehicle was pulled along by four humanoid “living creatures,” each with four wings and human faces blended with those of animals. If you’re picturing “E.T.,” so am I.

The Bible describes other beings in and around the chariot, making it kind of like the deck of the Starship Enterprise. The ship’s chief science officer, Mr. Spock, of course, was a Vulcan, a half-human, half alien life form among his human shipmates, played by Leonard Nimoy, the Yiddish-speaking child of Jewish-Ukrainian immigrants to Boston. But enough about the Merkavah, lest we succumb to the dangers of overzealous speculation prohibited by the sages of the Talmud.

Early in the book of Bereishis (Genesis) there are references to beings who intermingle with — OK, who interbreed with — human beings, including “b’ney Elohim” and “nefilim.” While again, we are instructed not to belabor the meaning of these beings and incidents, lest our minds grow fuzzy and our teeth fall out, it isn’t lost on some scholars that “nefilim” means “fallen,” as in “fallen from the sky.” Either or both of these non-human species could well be our brothers from another planet. (They are referred to as males.)

In the Book of Judges (5:23), a passage reads, “Curse Meroz, said the angel of the Lord, curse bitterly its inhabitants.” The 18th century sage Rabbi Pinchas Eliyahu Horowitz claimed to have found Talmudic backing for his belief that Meroz was another planet, just one of many other worlds that God created.

Rabbi Joseph B. Soloveitchik, the 20th-century scholar known simply as “The Rav” — a reflection of the serious respect he was accorded throughout the Jewish world—expressed openness to the possibility of life on Mars and elsewhere.

“It is possible that Hashem created other life forms on other planets,” Soloveitchik wrote. “It is no problem to yahadus. The reason man likes to think he is the only created being in the entire universe is because of his egotistical nature. Even the concept of am ha’nivchar, chosen nation, may only be relative to our world, our small section of the universe. The Torah is written from the viewpoint of our sun, moon, and stars. It would not detract from our being the am ha’nivchar of this region of space if there were other am ha’nivchar in a distant galaxy.” In other words, don’t be grabby, children, there’s enough universe to go around.

Mid-20th century kabbalist Aryeh Kaplan was also a professor of physics, and he often sought to find common ground between the two disciplines. For Rabbi Kaplan, there was no question that extraterrestrial life existed and that it was discussed in the Zohar. Kaplan wrote, “The Midrash teaches us that there are seven earths. Although the Ibn Ezra tries to argue that these refer to the seven continents, the Zohar clearly states that the seven are separated by a firmament and are inhabited. Although they are not inhabited by man, they are the domain of intelligent creatures.”

In the late 20th century, a Jewish myth-monger named Steven Spielberg wrought his vision of interstellar life on the silver screen in the form of the now-classic sci-fi film, “Close Encounters of the Third Kind,” in which aliens planted an image in the minds of a select number of humans that made them powerless against the lure of joining the creatures on a space ride to an unknown destination. These aliens seemed nice enough, however, and, musically speaking, they sure knew how to jam.

Seth Rogovoy is a contributing editor at the Forward. He frequently mines popular culture for lesser-known Jewish stories.