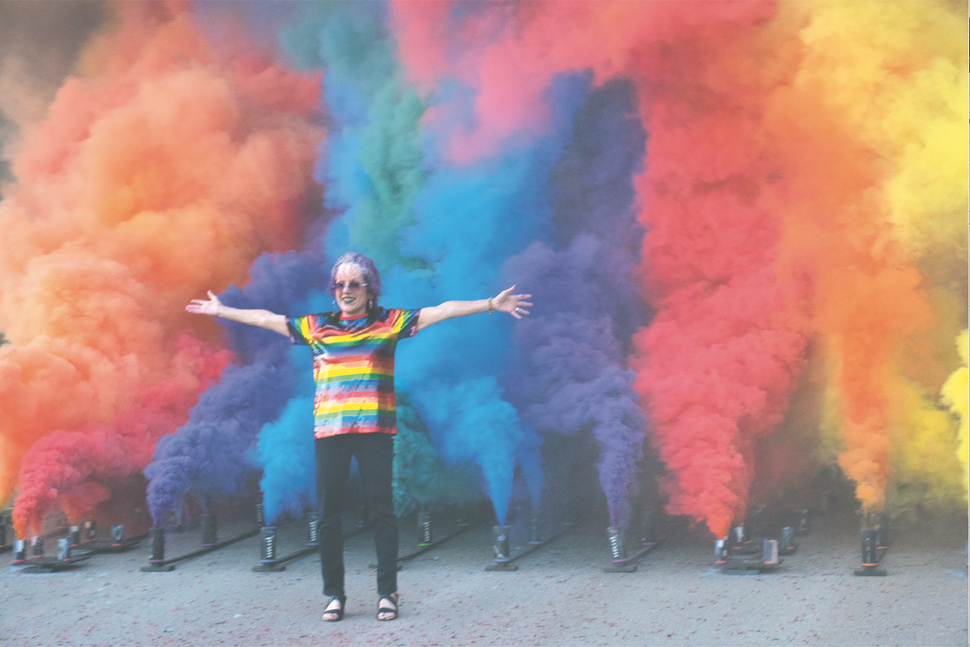 Judy Chicago, whose immense body of work draws on overlooked women’s history, the tragedy of the recent Jewish past and features no small amount of literal fireworks, is having yet another moment.

Born Judith Sylvia Cohen in (naturally) Chicago, the artist, whose name is regularly appended with words like “controversial,” will receive her first-ever retrospective in August at the de Young Museum in San Francisco. It’s hard to overstate the exhibition’s significance. It was over 50 years in the making, following decades of undeserved derision from the art community who dismissed her landmark work, “The Dinner Party,” a physical tribute to overlooked women and an experiment in communal artmaking, as “vaginas on plates.”

For Chicago, this look back on her oeuvre is a chance to “come out of the shadow” of “The Dinner Party” and reveal the breadth and diversity of her career. Her new autobiography, “The Flowering,” out on July 20, her 82nd birthday, chronicles the work and thinking behind the countrywide “Birth Project,” the embrace of Jewish identity through “The Holocaust Project” and her growing concern for the environment present in her latest exhibition, “The End.”

The book is also a frank account of her personal life, marked by tragedy and fueled by invention and a tenacity that not only channeled her own ambitions, but imagined a new model for art education for women grounded in an awareness of a long-buried heritage.

I spoke with Chicago over email about her Jewish identity, how “absence” informs her art and how her book and retrospective are finally “making visible” her story and her life’s work. The following exchange has been edited for length and clarity.

PJ Grisar: Bookending “The Flowering” is a lesson from your father — the notion of tikkun olam. How does that animate your work? Do you think it figures into one of the other major themes: heritage?

Judy Chicago: Even though my father broke away from his religious heritage (he was descended from 23 generations of rabbis) and both he and my mother were secular Jews, my outlook on life was shaped by Jewish values, particularly the concept of “tikkun olam.” My father was a labor organizer and a political activist and he believed – and passed on to me – the idea that the purpose of life was to make a contribution to a better world. 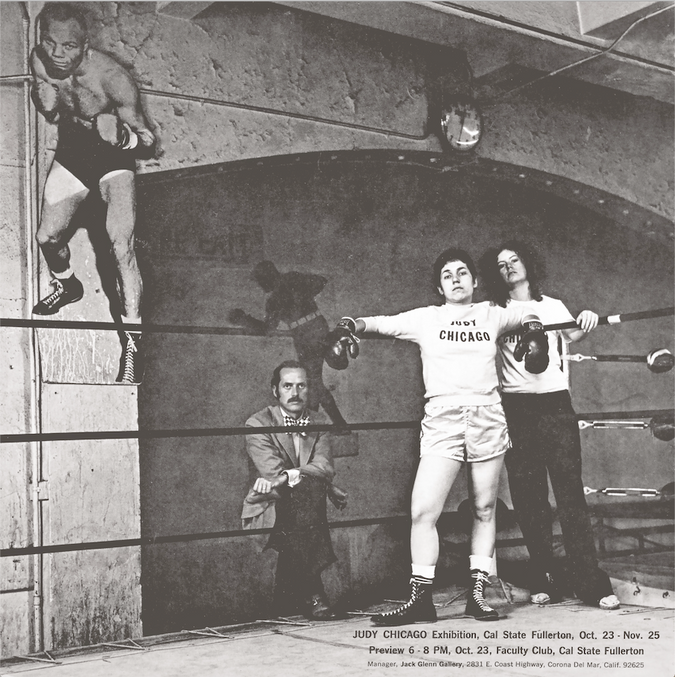 Where do you get your ideas? Are they somewhat spontaneous or gradual? I know you do a lot of research.

For me, making art is and has been a journey of discovery. I become interested in an idea and pursue that idea wherever it takes me. Many of my ideas are related to absence; for instance, in the late 1960’s – before the advent of women’s studies – I became interested in the lack of information about women’s history. Later, I took up the subject of birth; again, there was an absence of images about this most universal life experience. In a similar way, when I and my husband, photographer Donald Woodman, started work on the subject of the Holocaust, one could have gone into any contemporary art museum and – judging from the absence of art of that subject – never even known the Holocaust had happened, much less that it has often been described as the major philosophical challenge of the 20th century. As to research, I strongly believe that one should know something about any subject one decides to take up so that’s where I begin. 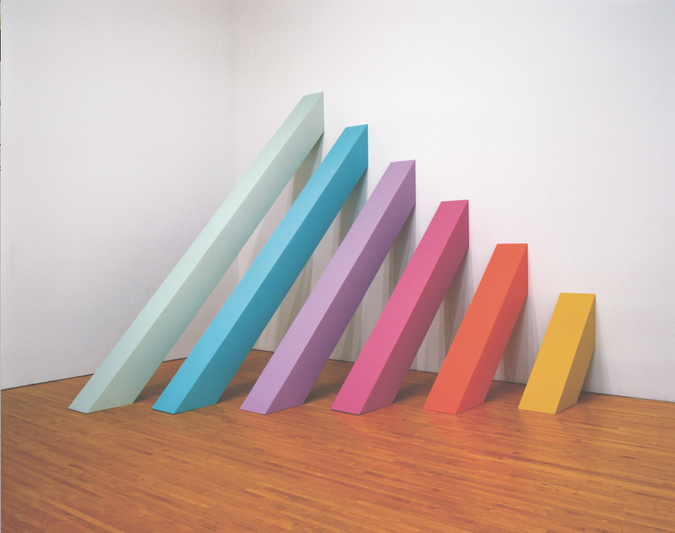 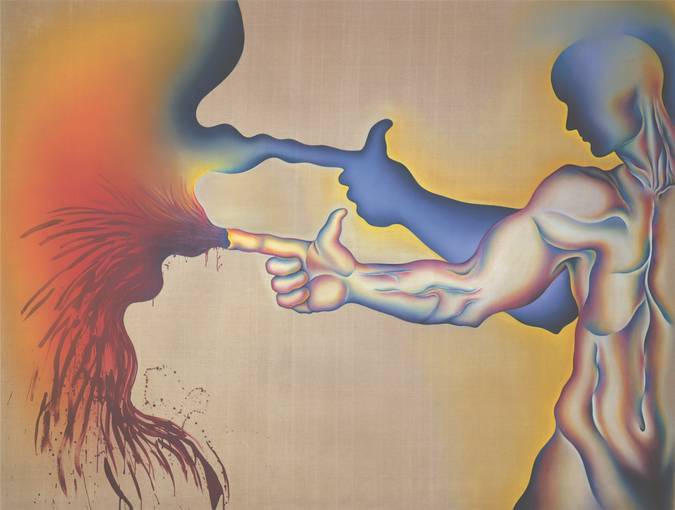 In the Shadow of the Handgun from Powerplay 1983. Sprayed acrylic and oil on Belgian linen, 108 × 144 in By Collection of Elizabeth Sackler

In the book you address the critical response to “The Holocaust Project,” but I know you were also concerned with the reaction from within the Jewish community. Do you find that the subject is now receiving more attention outside of Jewish art spaces? Did it feel taboo in the same way as some of your earlier art?

Our goal was to try and cross the ongoing divide between the art and Jewish communities — something that still exists. Within the Jewish community, there is an enormous amount of art on the subject of the Holocaust. In fact, we often heard a comment about “being Holocausted out.” Within the art community, there are many major collectors who are Jewish but few collect art that has openly Jewish content. In fact, there are some collectors who do not want the museums with which they are involved to show work that deals with the Holocaust. I find this unfortunate. I was thinking about the intersection of art and identity. White men have the historic advantage of being associated with a school rather than a nationality or an ethnic group and their gender’s accepted as the default. Is this identity association sometimes misguided — is art necessarily feminist when made by a feminist? Jewish when made by a Jew? Do you ever resent your background receiving more attention than your aesthetics?

No, of course not. Feminist art can be made by men because feminism is a philosophical system that dates back hundreds of years and has evolved over that time. Jewish art is more complicated because clearly, why would a non-Jewish artist make art with Jewish content? Still, even when one’s gender, ethnicity, religion, sexual orientation, etc. suffuses one’s art, that does not necessarily explain the art because artists are more than one thing – especially this artist. In fact, one of the things my retrospective is going to make clear is the complexity of my oeuvre. The Dinner Party, 1979. Mixed media installation By Collection of Brooklyn Museum Gift of the Elizabeth A. Sackler Foundation

Do you have a name for your style or a movement that you feel a kinship with?

I see myself in the history of art; that was one of my goals, to become part of art history.

You began the book over the pandemic. Has your process changed at all — are you still doing 10 hours a day in your studio?

Not really except that I am too old now to work 10 hours a day. Moreover, when I was young, I had to “see” everything on paper. Now I am able to do a lot of work in my mind. However, the quiet that descended on the world in early 2020 allowed me long hours to work on “The Flowering.” Given how busy I was I have no idea how I would have written it had the pandemic not happened. At the same time, I felt guilty because COVID caused so much suffering to so many people. Rejection Breakthrough Drawing from the Rejection Quintet, 1974 Prismacolor and graphite on paper, 40 × 30 in (101.6 × 76.2 cm) By Collection of the San Francisco Museum of Modern Art 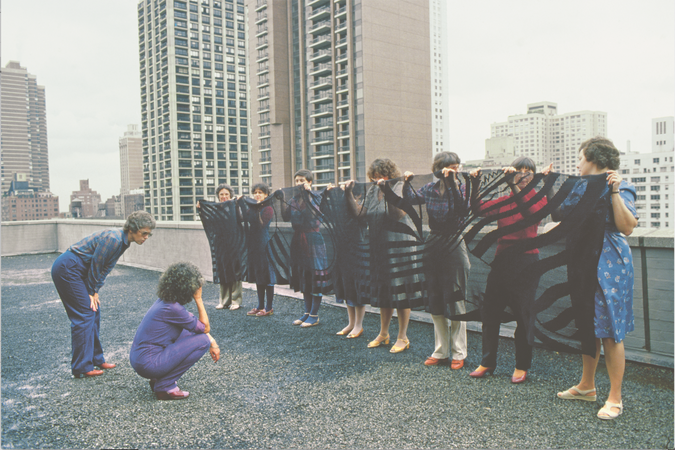 Reviewing Birth from the Birth Project, 1984. Filet crochet, 94 × 225 in, crocheted by Dolly Kaminsky, on the rooftop of a New York City apartment, ca. 1983–1984 Courtesy of Through the Flower Archives Belen NM

Recently Hyperallergic ran an article arguing against the effectiveness of temporary exhibitions of women artists. I wonder where you stand on that — is permanence the best way to expand the canon?

I was aware of the fact that even though there was an appearance of change in the art world, it was an illusion. But for many young women artists, the statistics that stimulated the Hyperallergic article were a shock. They thought everything had changed but the facts were that over the course of a decade, in major museums, only a small percentage of acquisitions were women artists and an even smaller percentage were women artists of color. Historically, there have been many periods when women artists emerged and were even wildly successful; the court of Marie Antoinette comes to mind. But instead of becoming part of art history, they were erased, a fate that I have struggled mightily against. 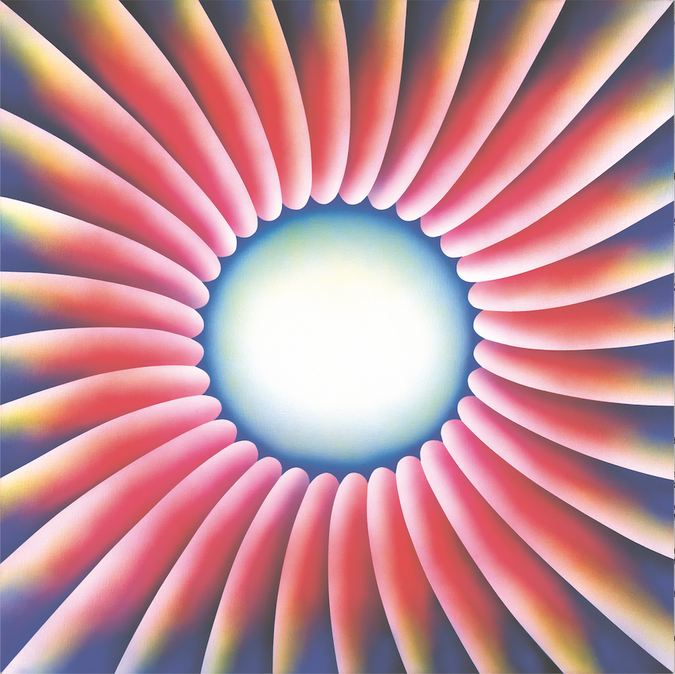