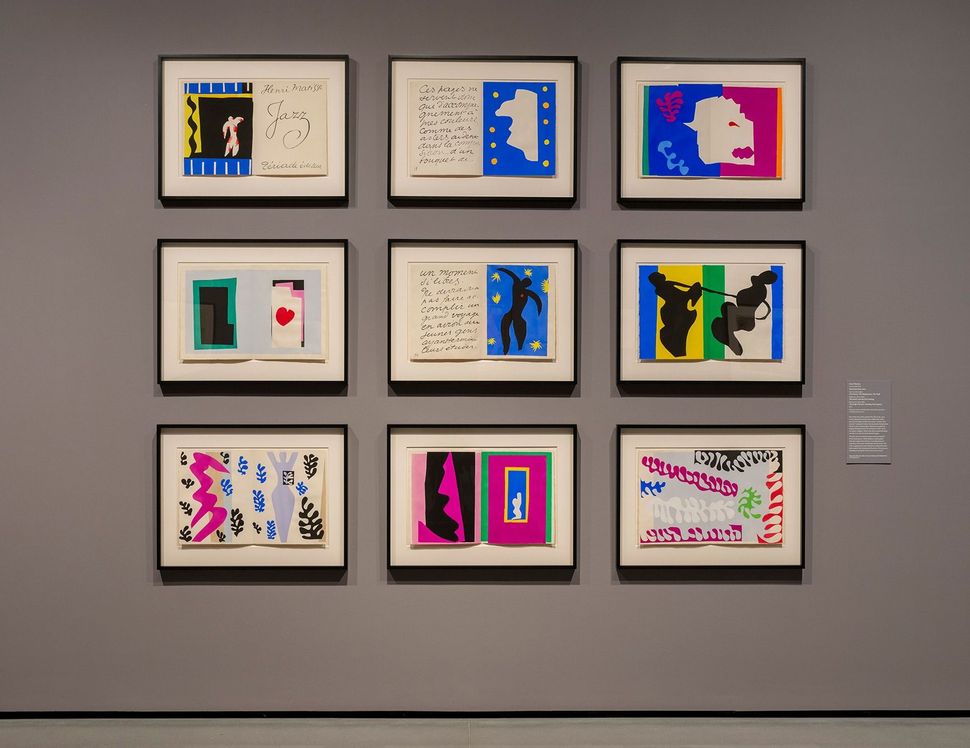 Growing up in the tightly-knit Jewish community of Baltimore in the 1960s, I took special pride knowing that the dazzling paintings — by such modern masters as Picasso, Cezanne, Monet and especially Matisse — that lined the gallery walls of a special wing in the Baltimore Museum of Art (BMA) were all there thanks to the collecting savvy and philanthropy of two Jewish women, the sisters Dr. Claribel Cone (1864-1929) and Etta Cone (1870-1949).

Now, a luminous BMA exhibition highlights the central role played by the too-often-overlooked younger sister Etta in creating the collection (whose permanent home is the museum’s Cone Wing), and showcases her 43-years of friendship with the artist whose work she admired most, Henri Matisse. The exhibit, “A Modern Influence: Henri Matisse, Etta Cone, and Baltimore” will remain on display through January 2, 2022.

Today, everyone loves Matisse. But back in the first decades of the 20th century, not so much. It was a shock to Baltimore’s still-Victorian-era sensibilities when the sisters, who never looked less than stodgy in their long lacy dresses, began bringing home canvases by Matisse from Paris and hanging them on their living room walls for all their guests to see at their weekly salons. Though we now consider these works masterpieces, they bewildered viewers with their off-kilter perspectives and unusually-posed portraits of partially or entirely nude women. 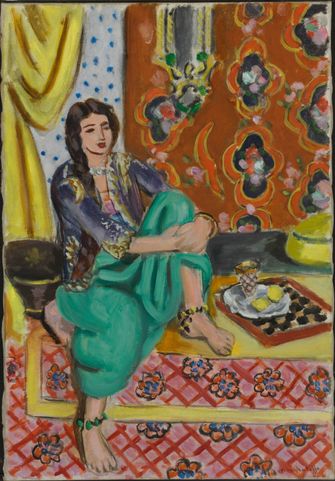 Yet unlikely as it may have seemed at a time when most arts collectors in Baltimore (and America in general) sought older works with more genteel subjects, these two sisters — children of Jewish immigrants, untrained in art history — developed a taste for then little-known and often controversial contemporary avant-garde artists.

Stroll through the current exhibit and you will view 160 art works by Matisse, including some commissioned by Etta, others specifically set aside by the artist for Etta to see before any other potential buyer. These works span the decades of their friendship and include some of his most enticing work: flamboyantly colorful paintings, starkly abstract bronzes, playful watercolors and a number of rarely-seen preparatory sketches and drawings. (You would also be well advised to then walk along the museum corridors to the Cone Wing itself, where you can view even more Matisse, as well gems by Cezanne, Van Gogh, Gauguin, and Picasso, among others.)

And you will also learn, as I did, that Etta, the lesser heralded of the sisters, was actually the leading artistic force behind the collection. 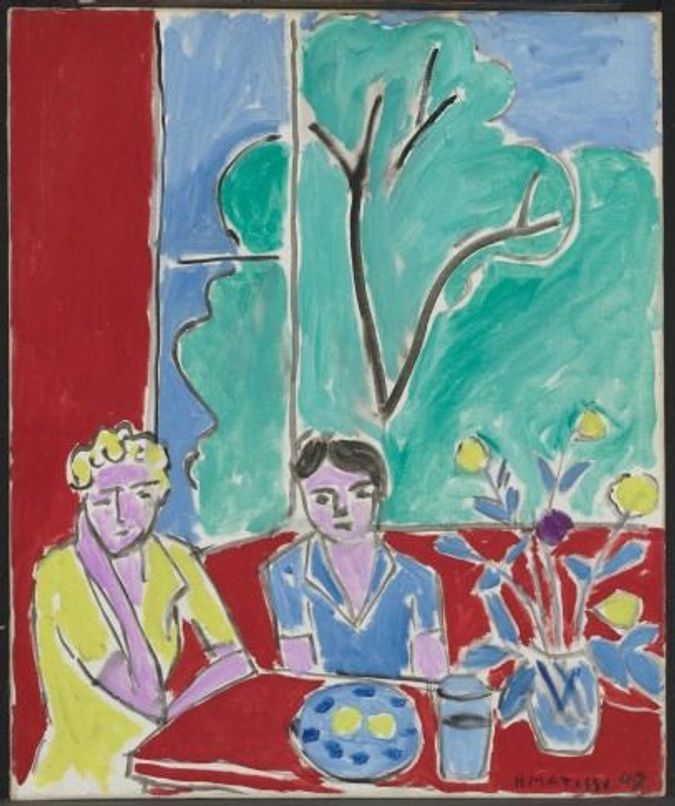 Family dynamics and social assumptions may have had something to do with that, especially since the collection bequeathed to BMA after Etta’s death carried the name of both sisters. In addition, Claribel was older and, unusual for her time, earned an MD and became a research pathologist. By contrast, Etta, the youngest daughter among her family’s 13 children, was more mild mannered and, after graduating from high school, took on the outwardly less assertive and more traditional role of the family’s designated caregiver —keeping house for her parents Herman and Helen until their deaths in the late 1890s.

It was in that home that the sisters originally met and became acquainted with members of another German Jewish family — the author Gertrude Stein and her brother Leo. And it was that friendship that would, in time, lead to Etta’s introduction to Matisse and the other artists in the Steins’ circle in Paris.

Etta initiated the collection in 1898. After her parents’ deaths, her older brother Moses gave her $300 to help decorate the family home — which she made use of by going to New York and boldly purchasing five paintings by the American Impressionist, Theodore Robinson. Those sun-dappled landscapes, displayed amid the otherwise darkly Victorian furnishings of the family home on Baltimore’s Eutaw Place (the favored neighborhood for the city’s well-to-do German-Jewish community), were probably the first American Impressionist works ever seen in the city. 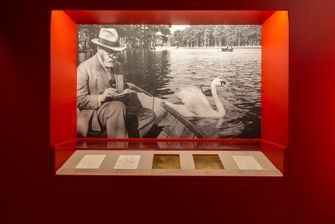 43 Years of Friendship: The exhibit, “A Modern Influence: Henri Matisse, Etta Cone, and Baltimore” will remain on display through January 2, 2022. Courtesy of Baltimore Museum of Art

Around this time, as well, family legacies made Etta and Claribel independently wealthy, allowing them to travel — and spend — freely in sojourns to Europe and around the world. A decades-long collecting spree was about to begin, for each of them separately, and together.

From this moment on, it seems clear that for Etta, art was everything. According to the exhibit’s co-curator, Katy Rothkopf, the sisters weren’t particularly religious “My sense,” she said “is that what they spent their time thinking about and enjoying was art and music.”

To be sure, the family was proudly and publicly Jewish. In 1891, the Baltimore Hebrew Congregation commemorated Herman Cone’s contributions to the synagogue’s newly opened building (a magnificent structure that was listed in 1976 on the National Register of Historic Places) with a plaque inscribed with his name. And another sibling, Fred Cone, had served as president of the city’s Jewish Educational Alliance, formed to aid newly arrived impoverished Jewish immigrants from Russia and Eastern Europe.

Still, after viewing the exhibit I found it hard to escape the notion that art was Etta’s real religion, collecting was her passion, and her chief rabbi among artists was Matisse.

Etta first saw the work of Matisse in 1905, during an 18-month sojourn to Paris. The visit to his studio was facilitated by close relatives of Gertrude and Leo Stein, whose Paris apartment had become a gathering spot for any number of avant-garde artists, include Picasso, whom she also met.

Matisse (who, born in 1869, was almost an exact contemporary of Etta) was then in his mid-thirties, and as penniless as he was unrecognized. Critics scorned his brash colors and jarringly original compositions. But Etta, who was increasingly drawn to the avant garde, soon purchased her Matisse — “Yellow Pottery from Provence.” By the time of her death in 1950, the number of works by Matisse in the collection had grown to nearly 700. (By comparison, the collection included a “mere” 114 works by Picasso.) 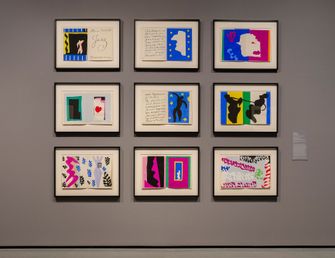 The rapport between Etta and Matisse stemmed, at least in part, from their mutual family backgrounds in textiles and fabrics. The Cone family fortune was based on the Cone Mills Corporation (among their manufacturing products was denim for the Levi-Strauss Corp, founded by another German-Jewish immigrant, Levi Strauss), while Matisse was the son and grandson of weavers. And that shared taste for highly ornamented, textured, colorful patterns is as much on display in Matisse’s paintings, as in the decorative style of the Cone sisters’ apartments.

Indeed, the rooms Matisse depicted in his paintings seem uncannily similar to the décor, captured in photographs, of the rooms in which Etta lived and whose walls she decorated with his paintings: in both cases chaotic harmonies of patterns in which every single surface (wall, floor, ceiling, table, vase, sofa, curtain) is covered with a multitude of geometric stripes, polka dots, diamond shapes and doodle-like wavy lines. Matisse — like Etta — also favored bold colors schemes that mixed and matched a palette of sparkling blues, yellows, purples and profusions of all the hues and shades of the flowers Matisse so frequently depicted.

“Etta was creating a bit of her own Matisse interior in her own interiors,” Rothkopf said. “They shared a love of decoration and pattern.”

Claribel died in 1929; in character with her habits as a collector and art lover, earlier that same day she had purchased a painting by Gustave Courbet. Etta was despondent at the loss. Among the many letters of consolation she received was a heartfelt message from Matisse himself. Their correspondence continued, and in 1930 Matisse visited Baltimore, staying over in Etta’s guest room.

They must have had much to talk about. Claribel had bequeathed her collection to Etta, joining their separate collections into one. Claribel’s will had also floated the idea of the entire collection becoming, after Etta’s death, part of the BMA — but only on condition that “the spirit of appreciation for modern art becomes improved in Baltimore.”

By the time Matisse came to call on Etta, that attitude was already warming. Earlier that year, Etta had loaned BMA works from both their collections, including some by Matisse, for an exhibition in memory of Claribel. Matisse sensed the possibility from these developments, Rothkopf speculates, that “he might have a chance to be a part of a collection in the museum.

“And so he started to make things for her and saving pieces for her,” Rothkopf said. “He wanted Etta to have the best collection of his work possible.”

Etta soon commissioned from Matisse a portrait of Claribel that would serve as frontispiece to the illustrated catalogue of her and her sister’s collection she had already begun to work on, and which was published in 1934. The next year, Etta and Matisse exchanged letters that included 22 photographs chronicling the stages of development of his influential painting, “Large Reclining Nude,” which she then bought, in 1936. Further purchases continued until Etta’s death, in 1949, after which the entire Cone Collection came into the possession of the BMA as the sisters’ legacy.

“It was your work that has filled my life,” Etta Cone wrote Matisse.

And now it fills the galleries of the museum I grew up with. Thank you, Etta, for your gift to Baltimore — and to me, among the many, many others whose lives have been, and continue to be, enriched by these resplendent works.