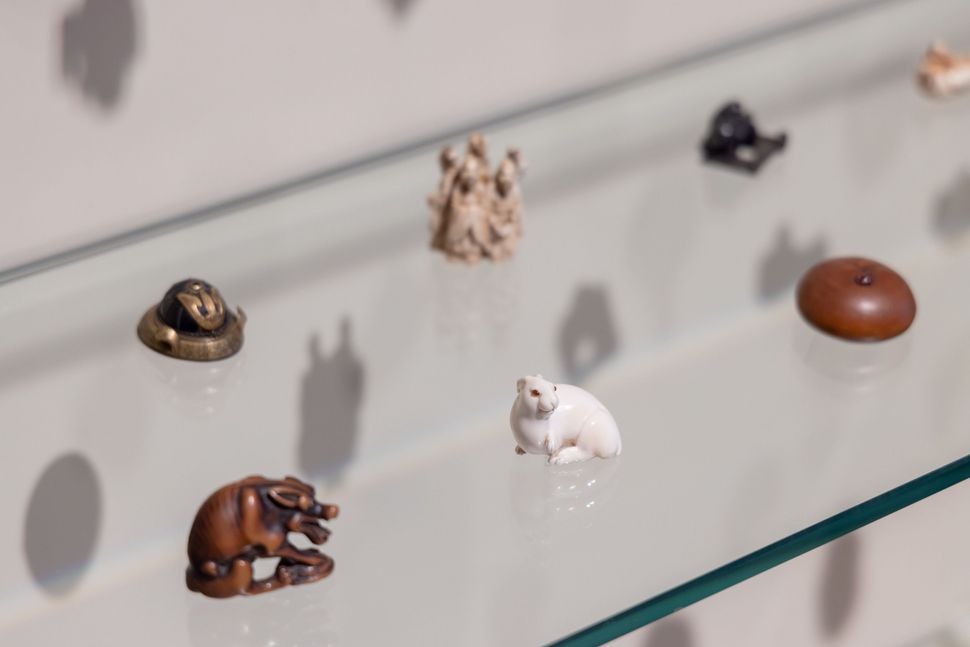 Installation view of “The Hare With Amber Eyes.” Image by Iwan Baan

The newest installation at the Jewish Museum tells the story of a vanished world. But a series of entirely contemporary photographs are among the most striking objects on display.

Captured by the Dutch architectural photographer Iwan Baan, the photos show a series of opulent rooms filled with prosaic everyday objects. A hand sanitizer dispenser stands sentinel at the foot of a sweeping marble staircase. Rococo murals are partially obscured by red filing cabinets. Near a window onto a spacious courtyard, a stolid radiator hums. Currently, the distinguished mansion in these photographs houses a medical insurance agency. But just over a century ago, it was the Hôtel Ephrussi, the Paris home of one of Europe’s most influential Jewish families and the inspiration for this exhibit, “The Hare With Amber Eyes.”

If you feel you’ve encountered this particular hare before, you’re onto something. The exhibit is based on a 2010 memoir of the same name by British ceramicist Edmund de Waal, a descendent of the once-famous Ephrussi family. His ancestors’ story begins in 19th-century Odessa, where Charles Joachim Ephrussi made a fortune in the grain trade. His children, newly wealthy, fanned out across Europe. They founded banks. They built palatial homes in capitals like Paris and Vienna. (Some of their former homes are tourist attractions today.) They blunted their arriviste edges by becoming patrons of the arts and amassing vast collections. At their peak, the Ephrussis rivaled the Rothschilds in wealth and prestige.

But during WWII, the Nazis confiscated most of the family’s properties and possessions, and the Ephrussis dispersed again, landing in Britain, Mexico and Japan. In his memoir, De Waal traces this history through a collection of netsuke, tiny Japanese ornaments carved out of ivory and wood to resemble people and animals — rats, horses, oxen and, as the title suggests, some particularly arresting hares. Small and portable, the netsuke were among the few artworks that evaded Nazi notice and remained in the family’s hands throughout the war.

De Waal’s family history relies on and delights in objects, trusting them to tell the stories their owners no longer can. So does the exhibit. Created by the design firm Diller Scofidio & Renfro (known for their work on The High Line), it displays de Waal’s netsuke alongside art and objects from the European mansions where they once resided. 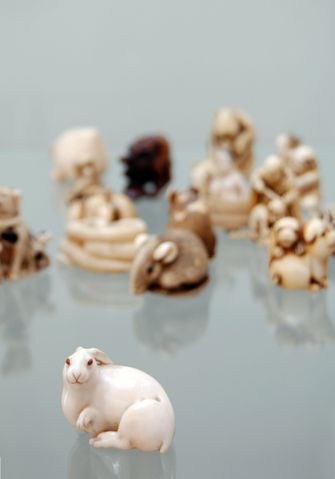 A selection of netsuke from the de Waal family collection. Image by The Jewish Museum

Visitors start their tour in a room decorated to resemble the Hôtel Ephrussi, home in the late 1800s to another Charles in the family, this one the grandson of the grain-vending paterfamilias. Armed with good taste and a lot of money, Charles made a name for himself as a bon vivant, so much so that his friend Marcel Proust used him as a model for Charles Swann, the urbane art critic at the center of “In Search of Lost Time.” A selection of netsuke are displayed on a central table, while the books, letters and furniture that line the walls evoke Charles’s glittering social life. I was captivated by an exquisite Manet still life, a bunch of asparagus for which Charles drastically overpaid; in recognition of his generosity, the artist sent him another canvas with a single additional spear.

Charles acquired the netsuke in the 1870s, while living at the Hôtel Ephrussi. In 1899, he gave them as a wedding present to his cousin Viktor, scion of the family’s Austrian branch and de Waal’s great grandfather. The next gallery shows how the netsuke might have looked in the Palais Ephrussi, Viktor’s home on Vienna’s famous Ringstrasse. Charles displayed the netsuke for visiting artists to admire; in Vienna, Viktor’s wife Emmy placed them in her dressing room, where her four children played with them while she prepared for the day with the help of her maid, Anna. The room reflects the opulent coziness of family life for these Ephrussis. On the walls, canvases by Dutch masters jostle with posed family portraits and a snapshot of Emmy strolling on the Ringstrasse, wearing a walking costume it probably took an hour to don. One whole wall is covered by an elaborate Torah curtain made, as was tradition, from a bridal wedding train. 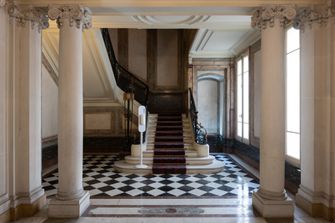 Of course, the family’s stability and prosperity crumbled with the 1938 Anschluss. Soon after entering Vienna, the Nazis arrested Viktor, forced him to sign away his assets and looted his home. Family lore holds that Anna, informed she could no longer work for Jews and tasked with organizing her employers’ confiscated property, hid the netsuke. After WWII, as the family began the painstaking legal process of recovering lost art and possessions, she returned them to Viktor’s son, Iggie. He displayed the carvings, once his childhood toys, at his home in Tokyo, where he lived with his partner for 40 years. On his death, he bequeathed them to de Waal, his great-nephew.

“The Hare With Amber Eyes” tells a story of immense wealth, and that’s part of its appeal. It’s fun to spend a morning wandering vicariously between European mansions, examining objects one cannot even aspire to own, before tramping back to the subway. But for the Ephrussis, as the exhibit makes clear, financial abundance didn’t do away with social precarity. To a museumgoer blessed with hindsight, the family’s tenuous position seems evident from the start. In the room devoted to the Parisian Hôtel Ephrussi, original works from the family’s collection are surrounded by sepia images of paintings they might have owned or encountered, like Renoir’s iconic “Little Irene.” Renoir himself, De Waal notes in an audio tour of the exhibit, didn’t mind disparaging his patron; he derided the Symbolist paintings Charles collected as “Jew art.”

The photographs of the Hôtel Ephrussi are the most pointed allusions to the family’s demise. Offering a visual lesson in the ways a seemingly immovable dynasty can fade into modern obscurity, they push the exhibit beyond voyeurism and turn it into a warning. When the Ephrussis needed protection the most, their wealth didn’t help them.