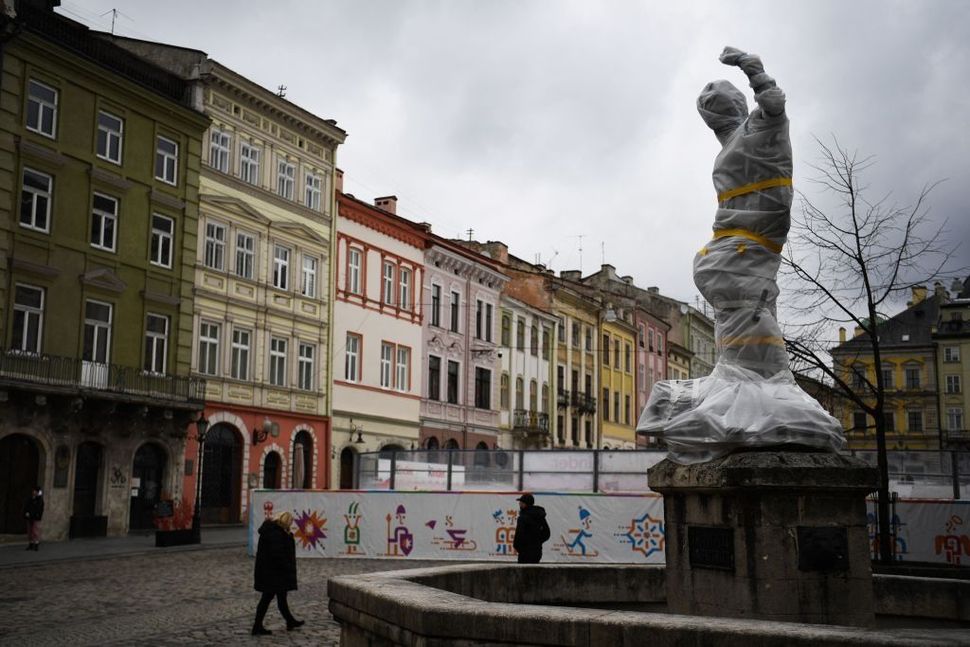 A statue in Lviv is wrapped in foam to prevent damage from bombing. Image by Getty

Novelist Zhanna Slor was born a few weeks after the Chernobyl disaster, in the Ukrainian city of Chernivtsi. Her timely arrival probably saved her father’s life. An engineer, he was slated to join cleanup crews at the radioactive site — until Slor’s mother demanded he stick around for the birth.

That family story returned to her earlier this month, when invading Russian forces took over the nuclear site. The news “really crystallized the scope of the invasion,” said Slor, who published her debut novel, “At the End of the World, Turn Left,” in 2021. “Who would even want a radioactive city unless they were planning to take over the country?”

Since the invasion of Ukraine on February 24, Jewish writers from the former Soviet Union have been watching with alarm and dread as war returns to the places their families fled. Some are glued to the news. Others are championing Ukrainian writing, hoping to preserve the cultural legacy currently under threat. Many are seeing key themes in their work, from the fragility of democracy to the immigrant and refugee experience, play out in real time — even as the onslaught of new developments often makes the daily work of writing seem impossible.

“It’s been hard to read, hard to think of anything other than the war,” said Ellen Litman, a Moscow-born novelist and professor at the University of Connecticut. 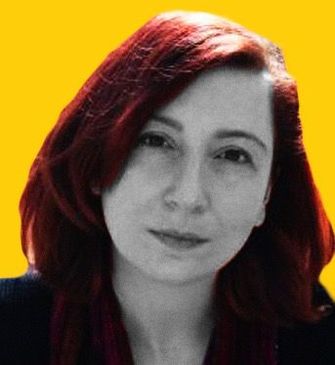 Author Ellen Litman has been combing Telegram for news from friends in Russia. Image by The Forward

Litman initially followed the war through TV Rain, one of Russia’s few progressive television outlets. But after TV Rain was forced to shut down, she turned to the app Telegram, where she can read updates from friends as well as prominent Russian activists, lawyers and economists. For the past two weeks she’s condensed those reports into “Telegram Chronicles,” short dispatches that she posts on Facebook and Medium for the benefit of English-speaking friends.

“I want them to know about the Russian people who are resisting this war and getting arrested and beaten,” Litman said via email. “About the new laws the Russian government continues to introduce to suppress and punish any sort of dissent, about the growing atmosphere of terror there.”

Boris Fishman, a Minsk-born novelist whose work chronicles the Soviet Jewish diaspora, said he has closer ties to Ukraine than to his native Belarus. As a teenager, he forged a deep friendship with his grandfather’s home health aide, a Ukrainian woman named Oksana. Her cooking helped inspire his food-focused memoir “Savage Feasts.” Fishman has traveled to Ukraine to spend time in Kyiv and in Oksana’s home city, Ivano-Frankivsk.

Fishman says he’s in daily contact with Oksana to check on her family. Though safe for now, they’re waiting for the day when fighting arrives at their town. 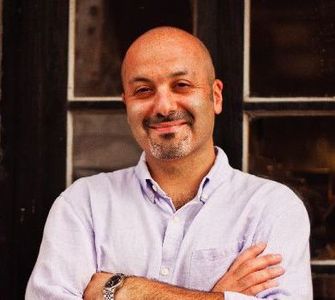 In the current plight of the Ukrainian people, novelist Boris Fishman sees his family’s Jewish struggle. Image by Rob Liguori

The long history of antisemitic persecution in Eastern Europe has touched Fishman deeply: One of his few Minsk memories involves visiting a steam bath on a street named for a Cossack leader who sought to eradicate Jews, and his parents immigrated because of the daily “humiliation” they experienced. Yet Fishman feels a deep identification with the Ukrainian people, one that stems from his own heritage. In what he described as Russia’s “demeaning” attitude towards Ukraine, he sees the treatment his family endured under Soviet rule.

At the Los Angeles Review of Books, editor-in-chief Boris Dralyuk, who hails from Odessa and immigrated to the United States in 1991, has been publishing reflections from Ukrainian writers caught in the crisis. For him, this isn’t just a matter of covering breaking news. At a moment when Ukraine’s autonomy is at risk, Dralyuk believes it’s vital to make the country’s literary culture visible to international audiences.

“What strikes me most is the strain of humor that runs through these works,” Dralyuk said. “Sometimes wistful, sometimes sly, sometimes broad, and so typical of the Ukrainian frame of mind, in any language.”

Indeed, sharing literature from the region has become a common way for onlookers of all backgrounds to show solidarity with Ukraine. “We Lived Happily During the War,” a poem by the prominent Ukrainian-born writer Ilya Kaminsky, went viral on social media. Journalist Talia Lavin, who learned Russian and Ukrainian in college and counts Kaminsky as an inspiration, published four poems in translation by the Ukrainian poet Iya Kiva in her newsletter.

“Translating poetry may seem like the farthest thing from useful in a war, but to me it’s an act of cultural defiance,” Lavin said, noting that Russian rulers have attempted to suppress the Ukrainian language for centuries.

“A brief history of snow,
as told by eyewitnesses […]
all those who defended this city
will come out to its walls [….]
you go first, snow”

Some writers have seen their literary preoccupations become breaking news items. Moscow-born graphic novelist Anya Ulinich, who has written about the Russian immigrant experience, is now documenting the Russian assault through illustrations she posts on Instagram. In her own novel, Slor explores the complex nature of immigrant identity for Soviet refugees, who saw the country they fled abruptly cease to exist. It’s a topic that feels especially relevant, and especially thorny, as Russia comes to look more and more like “the country we escaped.”

But while family history has informed her work in the past, she hopes it won’t have to in the future. “Luckily my family is all here now, or I would have all sorts of new things to write about,” she said.

Litman has been writing fiction about Russia’s political trajectory, from potential democracy to total autocracy, after the fall of the Soviet Union. With the onset of war, that arc has appeared in stark relief.

Her book’s new resonance doesn’t mean Litman is getting much work done. “All I’ve been doing is following those Telegram channels and writing and posting about the war,” she said.