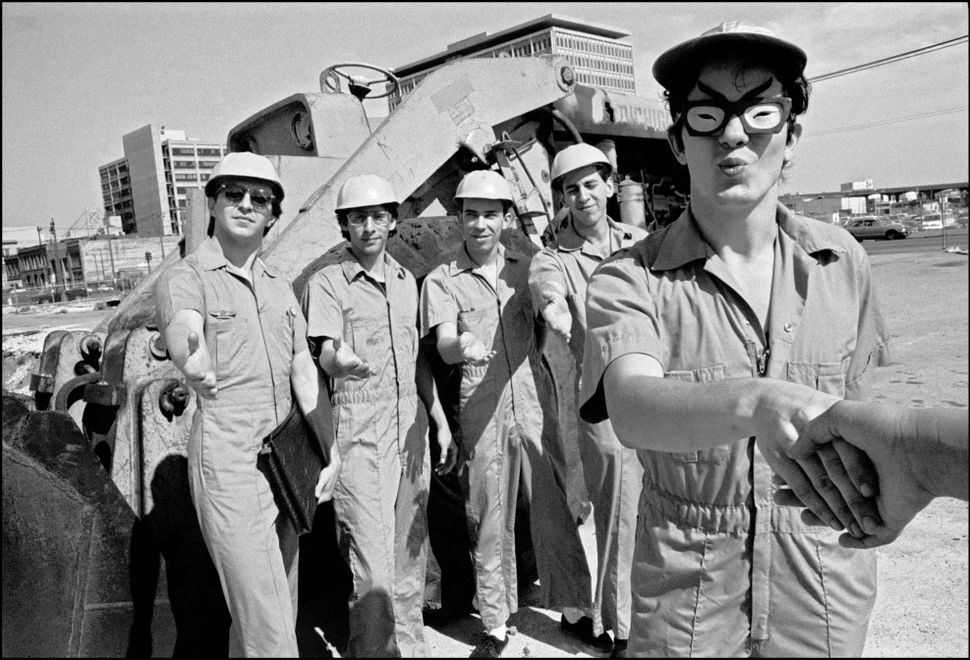 Working Near a Coal Mine: The original Devo lineup, clad in hardhats, poses by a construction site. By Getty Images

We’re entering spring and lo and behold — wonders of wonders! — Devo once again walks among us.

In May, they’ll play Pasadena as part of the massive Cruel World Fest with Bauhaus, Blondie, Morrissey, Echo and the Bunnymen and more surviving groups from that era.

Though, of course, not all the members of all the bands have literally survived. Which brings us back to Devo and its newest member Josh Hager, who joined in 2014.

“It’s weird,” Hager says, explaining how it feels to play “Whip It,” “Uncontrollable Urge,” ‘Jocko Homo”: and “Beautiful World,” among others. “A combination of it being completely natural, as I’m such a big Devo fan, but if I were to stop and think about it for a second, it would freak me out.”

In August of that year, Devo had a show to play with Arcade Fire at the United Center in Chicago, and Hager — who had worked with Devo on their 2010 album “Something for Everybody” — was asked if he was interested in joining the band. 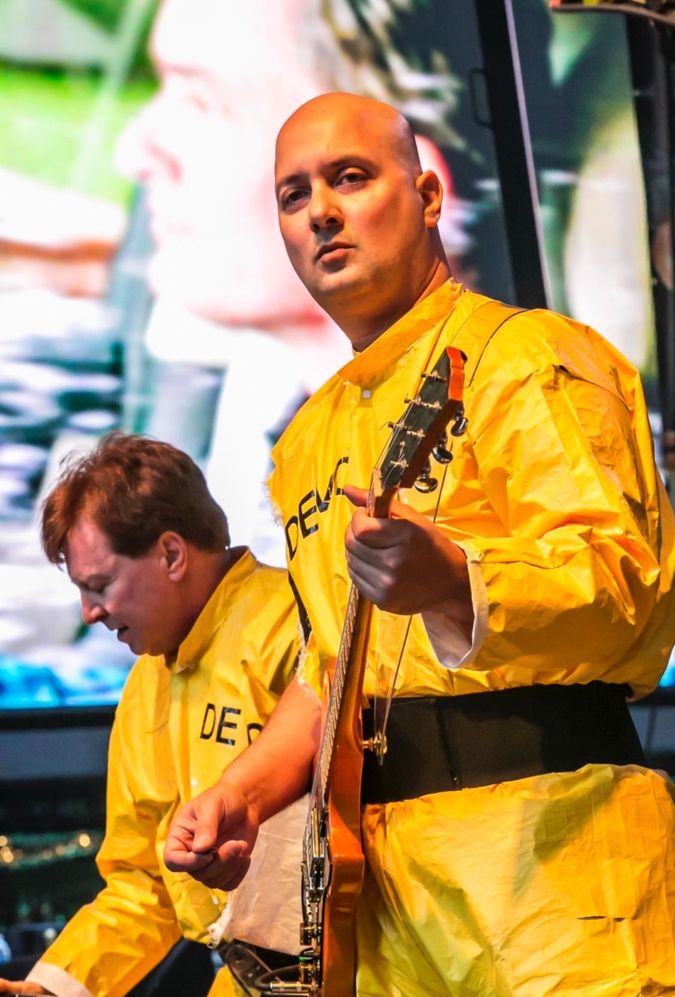 Born for the Yellow Jumpsuit: Devo’s moniker came from a theory one of its members had in college at Ohio State about mankind’s “de-evolution” – that society was moving backward, not forward. Courtesy of Josh Hager

Though Hager passed his audition, he was, initially, slated to play offstage in the wings, not sporting the bright yellow, faux-radiation protection jumpsuit the band members wear onstage.

“I had done all the rehearsals with them and right up until about 15 minutes before [I was ready] to be auxiliary,” Hager said. “But backstage, we’re playing and Jerry said, ‘You’re about 6 feet, about the same size as Bob. Why don’t you put the suit on? You’ll be on the stage with us tonight.’ Luckily, I was so anal-retentive about learning the parts I had also learned the lighting cues and the choreography and stuff.”

At one later gig, Devo was about to take the stage in New York. It was all quiet. Hager says Bob 1 turned to him and said, “I hope you’re not offended, but I really miss Bob 2 right now.”

“I was like, ‘Of course, I’m not offended.’ At the same time, I feel like I’m trying to keep his name alive in a lot of ways, keep his legacy going.”

For the record, as Devo has another Josh in the band, Hager is known as Josh 2 while drummer Josh Freese is Josh 1

With their various costumes, robotic lockstep stage maneuvers and fanciful videos, Devo has always been amusing. But underrate them at your own risk. Using synths and electric guitars, their sound is rooted in both traditional rock ‘n’ roll and futuristic exploration, employing acerbic observations, irony and sarcasm to critique our society. Their moniker came from a theory Casale had in college at Kent State about mankind’s “de-evolution” – that society was moving backward, not forward.

That connected with Hager, who, in a previous incarnation, played a costumed character called Garvey J while fronting a Boston trio called the Elevator Drops, which Hager calls a subversive “Dadaist mashup.”

“The live show was an experience,” Hager said. “We were there to freak people out.”

The Elevator Drops were known for pranks – they’d pass out fake blood capsules to audience members who, on a certain musical cue, were supposed to bite down and spurt blood. They’d engage some audience members to walk up to others and whisper “I know what you did” and walk away.

This mindset served him well when Devo beckoned. 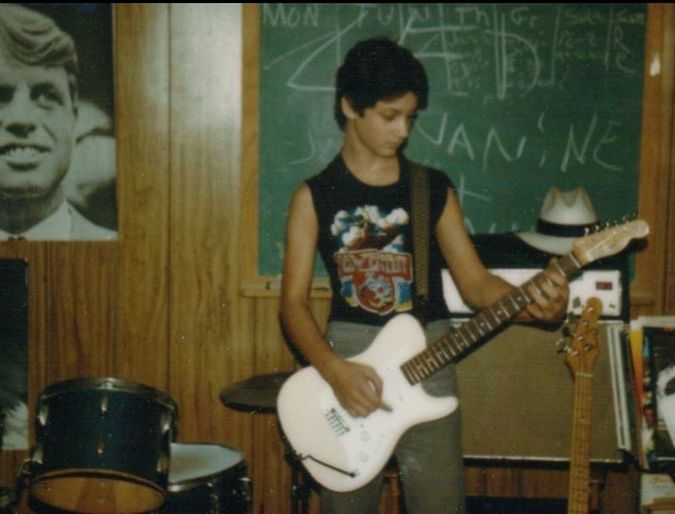 RFK Would Be Proud: The son of a Catholic mother and a Jewish father “who is a lot like Larry David,” Hager says he got permanently thrown out of Catechism class at age 12 for questioning too many things. Courtesy of Josh Hager

That and the sense of humor Hager — the son of a Catholic mother and a Jewish father “who is a lot like Larry David” — had long cultivated. He was raised Catholic but says he got permanently thrown out of Catechism class at age 12 for questioning too many things – the biblical talking snake perplexed him, for instance and he’d asked, “Wasn’t Jesus’s real name Yeshua?”

“The Jewish sense of humor and certain foods are part of my life,” says Hager. “A lot of the humor I liked was written by Jews, from the early Woody Allen films to MAD magazine to Andy Kaufman, who had a massive influence on what we did with the Elevator Drops.”

The Devo gig has been a trip, but having done only 10 of them over the years, not exactly a steady source of work or income. Devo kicks into gear, pretty much, says Hager, when he gets the call from singer-songwriter keyboardist Mark Mothersbaugh, who is also a highly sought-after soundtrack artist for movies, TV and commercials and runs a lucrative business called Mutato Muzica.

“Mark’s got a whole company to run and he’s gotta run his company,” says Hager. “There’s a lot of moving parts.” Hence, Hager says, while “they’re always getting offers to do this tour or that tour, they’re very picky. Everybody else is pretty much good to go but with Mark, time is very scarce.”

Hager, who was raised on Long Island and moved to the Boston area in the early ‘80s, has a varied career. After the Elevator Drops ended, he joined Matt Sharp’s Weezer spinoff group, the Rentals, as a touring guitarist in 1999. He’s also worked as a studio engineer – Miley Cyrus’s 2015 “Dead Pets” was one of the albums he worked on – and as a producer. 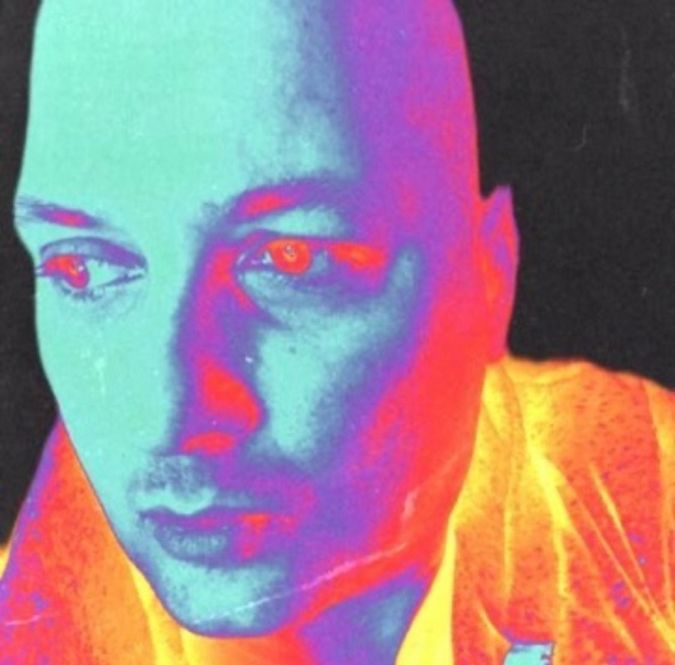 Heat-Seeking Vessel: Josh Hager has added a new jolt of humor to the legendary band Devo. Courtesy of Josh Hager

In 2013, Hager partnered with the incoming New Order bassist Tom Chapman to form the band ShadowParty. At the time, Chapman lived near Hager in Massachuetts but moved back to his native Manchester, England. They released an eponymous album in 2018, but Hager says the back-and-forth travel between countries ate up their touring budget, and their record company, Mute, was not supportive.

But the name-brand band, Devo, still resonates with people so many years down the road. Why is Devo relevant in 2022?

“Everything they said turned out to be true,” says Hager. “The theory of de-evolution. There’s nothing that really dates them. They’re their own thing, their own sound in their own bubble.”

“A lot of people take it on the surface – ‘Oh, Devo, they’re the one-hit wonder band with ‘” Whip it”’ – but then you get the people who know what Devo is actually about. I always thought of Devo as more punk than punk, although it’s sort of above the heads of a lot of punk rockers.”

And what will the future bring?