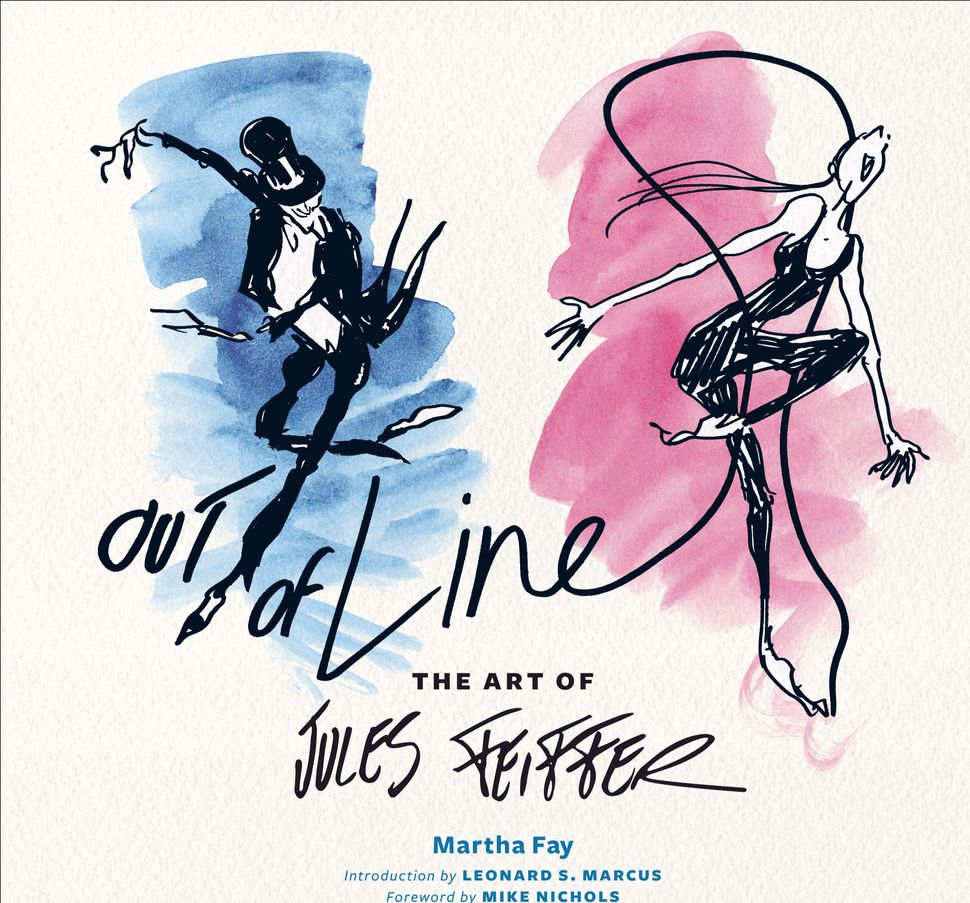 The first time I saw the way Jules Feiffer drew a line, I was captivated. I was at the School of Visual Arts’ library, reading his Pulitzer Prize-winning Village Voice strips, and his figures always seemed caught in midmovement, about to jump off the page with electric energy. Prose and drawings seemed effortlessly paired, and yet precise and strangely poetic.

Feiffer is 86 years old, but he’s not talking about retiring anytime soon. He started his career by knocking on the door of legendary cartoonist Will Eisner and becoming his assistant. Since then, he’s done everything from writing and producing plays to writing a nonfiction book about superhero comics and writing and illustrating children’s books (including “The Phantom Tollbooth”). He’s worked in Hollywood, famously writing the script to Robert Altman’s “Popeye.” Recently, in his 80s, he wrote and illustrated his first graphic novel, “Kill My Mother.”

Now, more than 80 years of Feiffer’s work can be seen in the beautiful new art book “Out of Line,” written by Martha Fay, a close friend and the author of “A Mortal Condition: Eight Stories of Survival, Loss and Hope” Recently, I spoke with Feiffer and Fay over the phone.

Lior Zaltzman: It was so interesting to see the old work from when you were a kid, and to see your influences. What did it feel like to go back to your childhood?

Martha Fay: It was hard to choose which pieces to include in the book. I think some of the most thrilling times were when we looked through his childhood stuff, which I had never seen.

Jules Feiffer: Also old comic books that I saved. I had quite a few. So it was kind of like a romp through history. 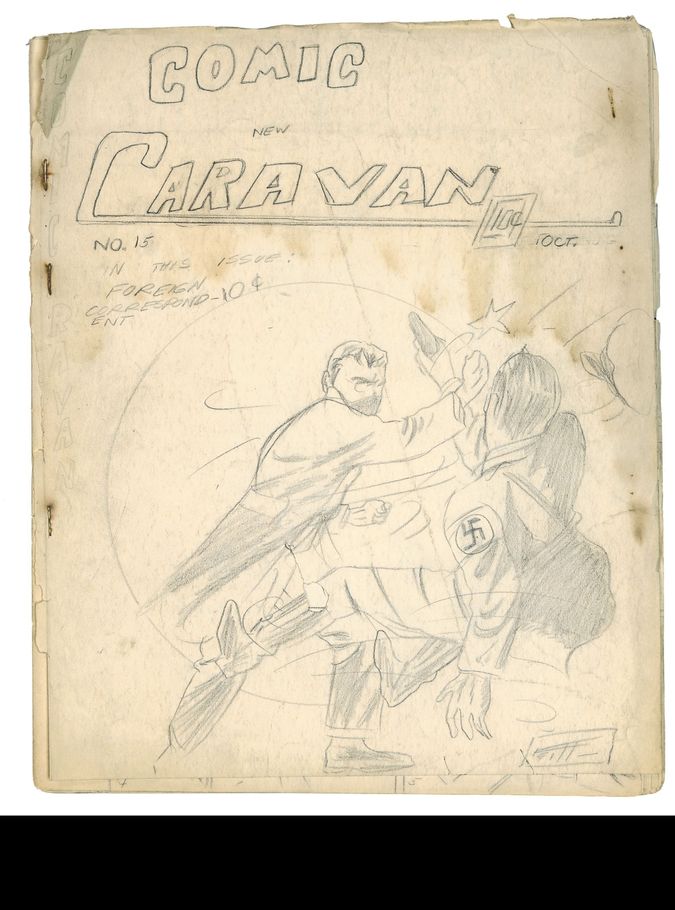 M.F.: And then we went to a vault in Brooklyn and got more, remember?

M.F.: We went to pick up art from Brooklyn, and there were all these possibilities, and then we had to do a whole other culling of the work.

J.F.: But that was dance stuff.

M.F.: A lot of it was dance stuff. But some of it was earlier, if I recall. It was really thrilling because it turned out to be 80 years of Jules’s drawings.

J.F.: Well, my mother had saved a lot of my earlier work. She was a fashion designer and was very supportive of my ambition to be a cartoonist. Although when she learned what kind of cartoonist I became, she must have had serious thoughts about that, because the last thing my mother wanted was public notice because of controversy. She was a U.S. citizen but she never took the citizenship as seriously as the ongoing persecution of the Jews wherever they happened to be or happened to hide. So she knew that if I made a scene, she’d be shipped back to Poland. She didn’t think I would be shipped back — but she would be shipped back. So she wanted me to be a nice boy, and I was until I was drafted to join the Army. And then I wasn’t under my mother’s thumb. All hell broke loose from that point on. Did you grow up in a secular household?

J.F.: We were about as religious or not religious as 1930s Bronx Jews who wanted to assimilate. So there was a recognition of the High Holidays, and you were shoved into Hebrew school somewhere before bar mitzvah if you were a boy. That’s all. But this was rather common at that time, unless you were Orthodox — that’s the way a lot of Jews lived. They wanted to melt into America. The best comparison is the Jewish movie producers who went to Hollywood at that time and essentially invented the American dream. It was never their intention to portray their people or Jewish history. Everybody wanted to be a goy.

M.F.: And half of them changed their names to make sure that they could.

J.F.: That only changed in the last 40 years or so. But that’s what it was then.

It was the same for my grandparents in Israel — nobody wanted to be from Poland.

J.F.: The Jewishness that affected me was the style, the culture, the reading habits, the humor, the wiseguy attitude…. All of which were quintessentially New York smart-ass Jewish. That style and culture was part and parcel of me — and part of my work. But going to shul or praying or putting on a shawl was never part of my childhood or my thought process.

Yes, I was thinking, in those Village Voice strips, that abrasive voice and that daring are definitely very Jewish. You were an assistant of Will Eisner’s. He got famous doing noir mystery comics, but then, later in his career, he started doing these very Jewish comics.

J.F.: That’s something that comes up often, but when I knew Eisner, his Jewishness was no different from my own. His secular nature was very clear to me. When we talked about our backgrounds, we talked about the Bronx. We weren’t talking about Judaism or bar mitzvahs or synagogues or Orthodoxy or any of that. So I don’t know why he moved into that area. I’ve heard suggestions. But that happened later in his life, when I wasn’t a part of it anymore.

But it’s interesting that then, later in your life, Eisner’s influence came, with “Kill My Mother.”

J.F.: Well, I consciously wanted to channel the two cartoonists who meant the most to me in my boyhood: Eisner, obviously, and Milton Caniff, who did “Terry and the Pirates.” The two of them were storytellers far beyond anybody else at that time in comics, and from the beginning I was channeling and stealing as much as I could from these two brilliant men.

M.F.: You don’t see many artists confessing as much as Jules does. One of the charms is hearing him talk about his “swipes.” He knows where he got every bit.

J.F.: What I said for many years about my men and women cartoons for the Voice was that what I was trying consciously to do was to channel Robert Benchley of the 1920s and 1930s. He was a great humorist in The New Yorker and wrote about the man who gets everything wrong and nothing ever goes right. But Benchley came from a very upper-middle class WASP, very genteel family, Harvard-educated background. I said that with my character, all I did was borrow his character, circumcise him and throw him into the world of the Voice. 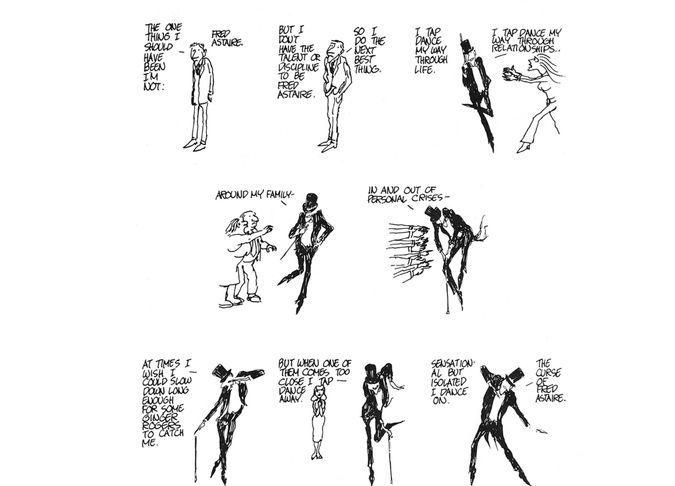 It’s very humble, but I think your work is so specific, it’s hard to get confused. You see the ghost of every influence, but in the end it is so your own, you channel it so well.

M.F.: Unfortunately I got stuck on Faulkner at a very young age. It took a hatchet to get me out of it.

J.F.: We all do that, and then eventually, by hook or by crook, by trying everything, you kind of emerge as yourself. And lo and behold, one day you wake and you can’t stand sounding like those other guys, and you come to emerge with your own outlook and your own voice.

M.F.: Jules was very frank in talking about not being very good at things. He talks about it repeatedly: “I didn’t know how to do this and I didn’t know how to do that.” It’s a very encouraging thing to hear if you are an artist, because it’s how everybody feels. He worked his way through all these muddles and he turned out to be better at some than others. But he tried almost everything. I mean, you really did try everything!

J.F.: Somehow, at 80 I learned to draw the way I wanted to draw and I didn’t know how to at 14, 15, 16, when I wanted to be an adventure strip artist, or I wanted to be Eisner or Caniff. But I could not draw that way. The miracle was that in my 80s I didn’t have to pretend to have that facility with the brush because there were markers that pretended to be brushes, and all sorts of instruments that allowed me to work in that style. Do you ever try working digitally?

J.F.: Martha does all these things on the computer that I can’t do. I can do an e-mail. I’ve learned how to type an e-mail. I don’t know what Twitter is. I don’t know any social media. And honestly, I have no interest in it.

I grew up on The Adventures of Tintin, and whenever I tried to emulate it, it was just terrible. So I was really inspired by these earlier drawings in the book, where Jules is looking for a line.

M.F.: Yes, that’s where the title came from.

And I love that the cover has the dancers…

J.F.: I wanted this book to be very welcoming to the reader and feel like a dance. I don’t want any sense of study or scholarship or of a seriousness or a loftiness about it. I want the book to just be happening in front of the reader. In my work, a lot of the drawing and the writing just happens, so that none of it seems studied. My reference point is Fred Astaire. Astaire would work months on a dance to make it look as if he wasn’t doing anything, make it effortless. And that stuck in my head. And that’s the effort I follow to this day —to make it look as if I haven’t done anything. 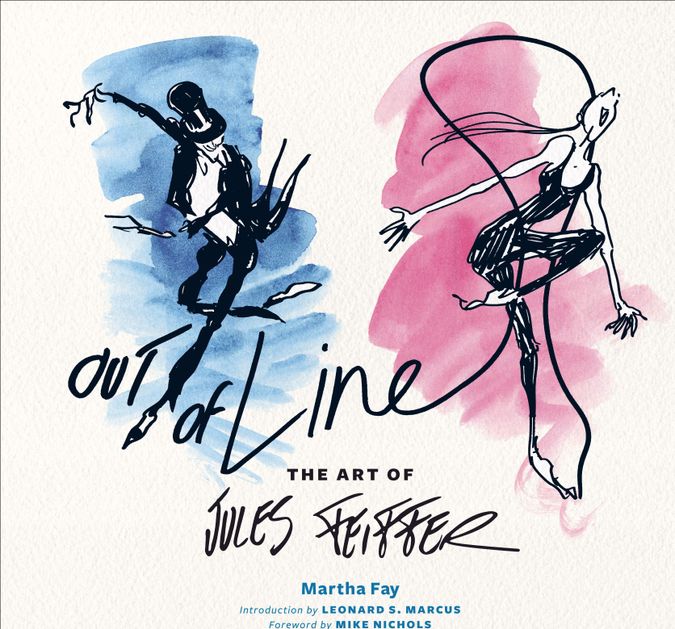