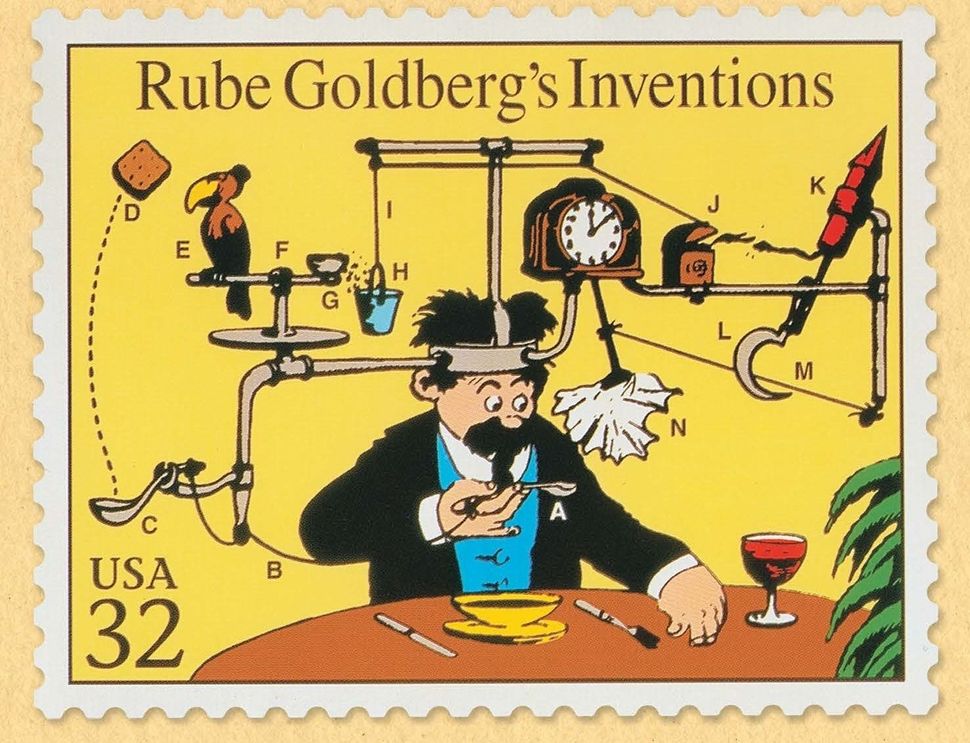 You push a button. A spring releases a bowling ball, which hurtles down a ramp toward a switch that uncages a bird, whose beak twirls a dial that activates the printer that spits out your ticket.

That’s not actually how admission to “The Art of Rube Goldberg” works, but it’s how the legendary cartoonist might have conceived entry to the National Museum of American Jewish History, where the exhibition runs through January 2019.

Rube Goldberg — so influential that his name is now a dictionary definition (“accomplishing by complex means what seemingly could be done simply,” Merriam-Webster) — enjoyed a supernova career as an artist, sculptor and even a filmmaker. But his prank-filled, elaborate contraptions — designed to accomplish a task like mailing a letter or using a napkin — are what endure in the public imagination.

The show is “the first comprehensive retrospective exhibition of Rube Goldberg’s work since the Smithsonian’s 1970 celebration of the artist,” the Philadelphia museum has said. Though conceived by an outside creative firm in association with the Goldberg estate, there’s a particular poignancy to seeing the artist’s life within the walls of a Jewish institution.

“We wanted to tell the story of how one particular Jew saw his world, and the dramatic changes in the world through his lifetime,” said Josh Perelman, NMAJH’s chief curator. “There’s also lots of Jewish character in his work and themes — Jewish humor and slapstick.”

The show’s greatest accomplishment, though, isn’t just the way in which it shares the joy and genius of Goldberg’s inventions; it’s also how it spotlights work that rarely gets recognized by nonaficionados: early cartoons; Pulitzer Prize-winning editorial comics; contributions to cinema, and merchandising acumen. Goldberg licensed images for board games, puzzles, playing cards and even cereal.

A whole range of modern comics artists can trace their lineage to Goldberg. Long before Al Jaffee launched his Snappy Answers to Stupid Questions in Mad magazine, Goldberg created his Foolish Questions series. Straight-haired women with big, round glasses seem like direct ancestors of Victoria Roberts’s urban characters. Wallace & Gromit, as a video installation makes clear, owe at least some of their looniness to Goldberg.

Born in 1883 to immigrant parents in San Francisco, Goldberg didn’t “live a Jewish life,” as Perelman put it. But attitudes of the times affected him. “When Rube started his cartooning career, he was encouraged to change his name. Obviously, he refused,” Perelman said. And in the 1930s and ’40s, Goldberg’s high profile attracted anti-Semitic harassment. “There was very unpleasant vitriol directed his way,” Perelman said. After one episode that saw human feces mailed to Goldberg during World War II, he insisted that his sons change their surname to George, though “The Art of Rube Goldberg” avoids such dark places. 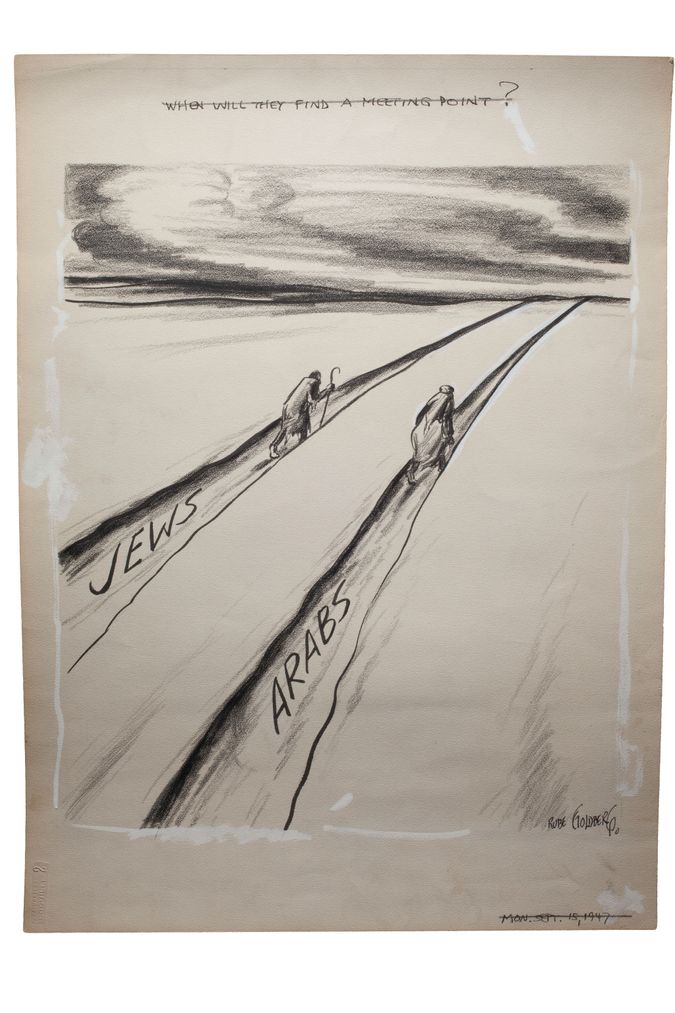 Jews and Arabs: Though known for his whimsical inventions, Rube Goldberg would occasionally veer into political commentary. Image by Copyright © Rube Goldberg Inc. All Rights Reserved.

“We wanted you to feel like you were inside Rube’s world, so it’s based on his principles,” Perelman said. “Everyday materials and very simple tasks made as difficult as possible.”

The exhibit establishes Reuben Garrett Lucius Goldberg’s rather baroque back story. His father, Max Goldberg, had moved to San Francisco during the gold rush. A successful entrepreneur and “character,” as Perelman puts it, the senior Goldberg discouraged his talented son from pursuing art as a career. But after Rube had earned an engineering degree at Berkeley and had taken a job he detested in the San Francisco sewer system, he quit to become a cartoonist for the San Francisco Chronicle.

The exhibit also features some lesser-known Goldberg comics creations, like “Mike & Ike (They Look Alike),” “Boob McNutt” and “Life’s Little Jokes,” most of which ran in Sunday newspapers through the early 20th century. 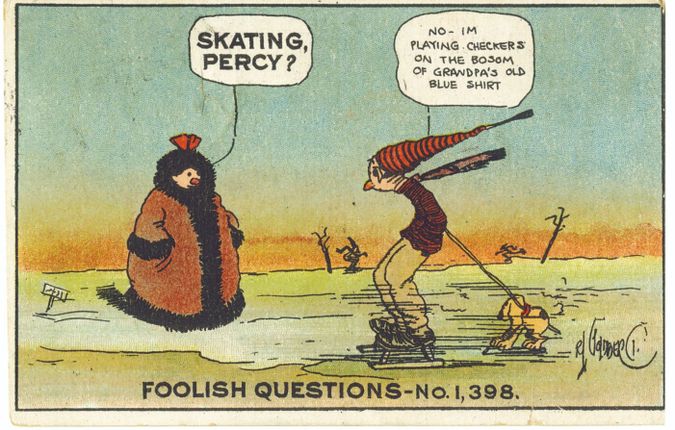 But it’s Goldberg’s famed “invention drawings” that many museumgoers will come to see, and the museum offers a terrific selection, almost every entry an original rendering. As much a satirist as he is a futurist, Goldberg used these drawings to poke an engineer’s fun at an increasingly automated world and the hapless humans at its mercy.

At the pinnacle of his fame, Goldberg pivoted into editorial cartoons. The move wasn’t as drastic as it might sound. “Social commentary’s apparent in his work throughout his career,” Perelman said. A 1948 cartoon, “Peace Today,” won Goldberg a Pulitzer Prize; it depicts a giant atomic bomb teetering on a cliff between “world control” and “world destruction.” Another powerful cartoon depicts hunched figures plodding down endless, parallel paths through desert sands; the tracks are labeled “Jews” and “Arabs.”

A section in the exhibit called “Before the Mad Men” showcases the many ads that featured Goldberg’s work, including promos for Old Angus scotch and for Lucky Strike cigarettes — never mind the fact that Goldberg, a dedicated cigar smoker, didn’t touch cigarettes.

The only dissonant note in this terrifically entertaining show is the somber dark-gray walls that suck some of the life out of the exhibition space. But “that elegance is a balance with the humor and joy in Goldberg’s work,” Perelman said. “It also helps you find the brighter walls.”

“The Art of Rube Goldberg” runs through January 21, 2019, at the National Museum of American Jewish History, in Philadelphia.