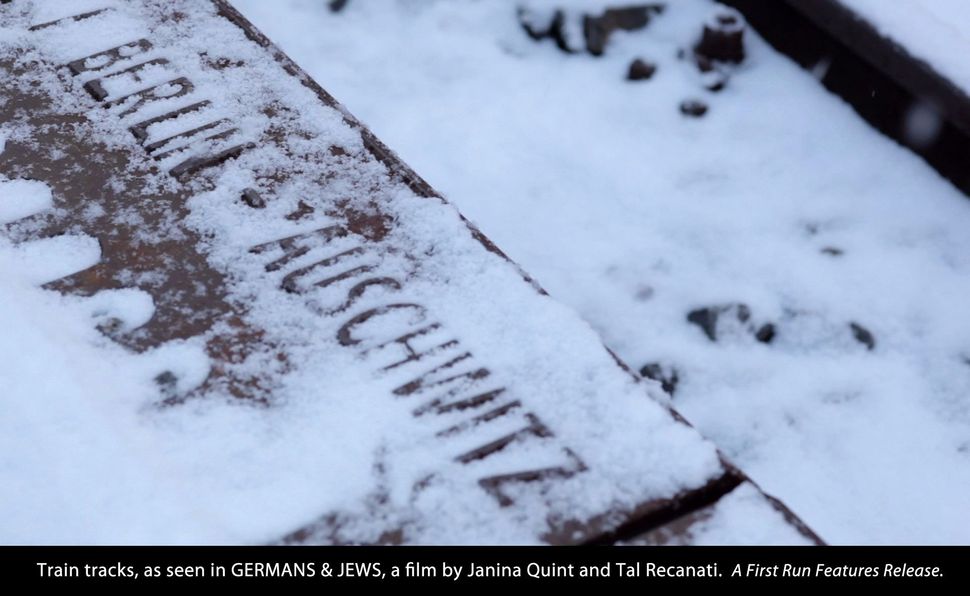 “Germans and Jews,” an engaging, thoughtful documentary about the current relationship between Germany and its Jewish population, begins with a lively dinner party. In the middle of the meal, a German woman suddenly confesses that she always feels self-conscious uttering the words Juden and Deutschland and only dares to say them in English. It is a singular moment for both the Germans and the Jews in the room — a moment that captures one of the many complexities of this candid film.

The dinner party brings together most of the principals of the film, which include German-born Jews, Israelis who have immigrated to Berlin, and non-Jewish Germans. Scenes from the dinner party recur throughout the film like a leitmotif, suggesting both the uniqueness and the straightforwardness of bringing together second and third generations of Germans and Jews to talk about the Holocaust seventy years after the end of the Second World War.

Other notable interviewees in the film include the late Fritz Stern, a world-renowned historian of the Holocaust; Rafael Seligman, an Israeli born German-Jewish writer who publishes The Jewish Voice from Germany; and Rabbi Andreas Nachama, born in Germany and the executive director of the Topography of Terror Museum in Berlin.

While “Germans and Jews” builds on what is perhaps the world’s most familiar history lesson, it is also notable for the new possibilities it draws from those lessons. The film is the brainchild and passion of producer Tal Recanati and director Janina Quint. Recanati, an American-Israeli Jew and Quint, a non-Jewish native of Germany, have been friends for thirty years. Over the years the two women have explored the repercussions of the Holocaust on their identities. Their openness, curiosity and respect for one another is a dynamic that they have carried to the screen. Quint was the first non-Jewish German that Recanati met. Her maternal grandfather was a member of the Nazi party while her paternal grandfather left Germany to fight against Franco in Spain.

I too have known Recanati for almost thirty years. We met as researchers at the Anti-Defamation League in New York City where our work encompassed tracking Neo-Nazis, skinheads and Holocaust deniers. It was emotional work and in the late 1980s, neither of us could have predicted that Berlin would some day have the fastest growing Jewish population in Europe. Recanati’s fascination with the impact the Holocaust had on ordinary Germans grew from there.

In 2008 Recanati, her husband, and two teenage daughters traveled to Berlin to delve into the German-Jewish past. “There were two things that struck me on that trip,” Recanati told me over the phone recently. “The first was that although I knew that the Germans had been digging into their past, examining it, facing it, I didn’t realize to what extent. You can’t turn the corner or pass a building without seeing some kind of memorial, small or large. The second thing is that we met a Jewish friend who grew up in Germany. He said that back in the 1980s Jews were sitting on packed suitcases waiting to leave. But things have changed completely. In a place where Jewish life was supposed to end, there is a vibrant Jewish community and there is a future.”

That trip inspired Recanati to think about the future of Germany and its Jews. When she returned home to New York she told Quint, a filmmaker, that there was a story happening in Germany that needed to be told. “I saw it as an opportunity also,” said Quint by telephone. “My husband is Jewish. My children have a dual heritage. I felt the need to get involved.”

Quint sees the fall of the Berlin Wall as one of the turning points in German-Jewish relations. “It was an opportunity where Germany had to make a decision to allow Russian Jews into the country. During the ‘90s more Jews came and there was a critical mass of people. And these days the German embassy in Israel is very busy issuing German passports to Israelis who can prove their ancestors once lived in Germany.” Statistics in the film back up Quint’s claims. In recent years there has been an influx of more than 10,000 Israelis into Berlin and there are 100,000 Israelis with German passports. Germany’s Jewish population has swelled from 25,000 in the early 1990s to almost 250,000 today. Yet Jews are only .2 percent of the country’s population.

Recanati cites 1979, the year that the mini-series Holocaust aired in Germany, as another milestone in German-Jewish relations. “That series helped Germans integrate the Jewish narrative into their own story. After that there was a process in which they didn’t just think of the past in terms of what their fathers and grandfathers did. They were suddenly looking at what happened to the Jews. But as the film shows, the process was slow. So many of the memorials to the Holocaust were built in the 1990s and the 2000s.”

In many ways Germany aims to be an eternal memorial to the Jews who perished in the Holocaust. Scattered throughout the cities are bronze plaques called stolpersteins or stumbling stones. The film highlights a young non-Jewish German woman who has made it her mission to buff and shine those plaques. “Anja Bukschat has adopted about forty of these bronze plaques,” Recanati explains. “They are an amazing metaphor for what is happening today in Germany. It’s haunting. This is what Germans live with all around them. You see parents stopping on the street with their children to explain what these plaques represent.”

Both Recanati and Quint assert that “Germans and Jews” intentionally picks up the German-Jewish story after the Holocaust. “It’s a very nuanced story of how these two people came together,” Quint says. “And it’s a distinctive film for the way it pushes the topic of the Holocaust forward. The relationship between our two peoples is still complicated. There is still residual guilt and awkwardness for the third generation.”

Recanati elaborates, “Germans today feel that [the Holocaust] is part of a past their children and grandchildren should know about. They continue to emphasize a strong civil society and human rights. At the end of the day the film tells a story that doesn’t just apply to Germans and Jews. It’s what any society can achieve with time, and introspection.”

Perhaps Andreas Nachama, the German-born rabbi, gives the best advice to future generations of Germans and Jews when he suggests that memorials and museums like The Museum of Topography “are not just places of memory, but also places to learn.”