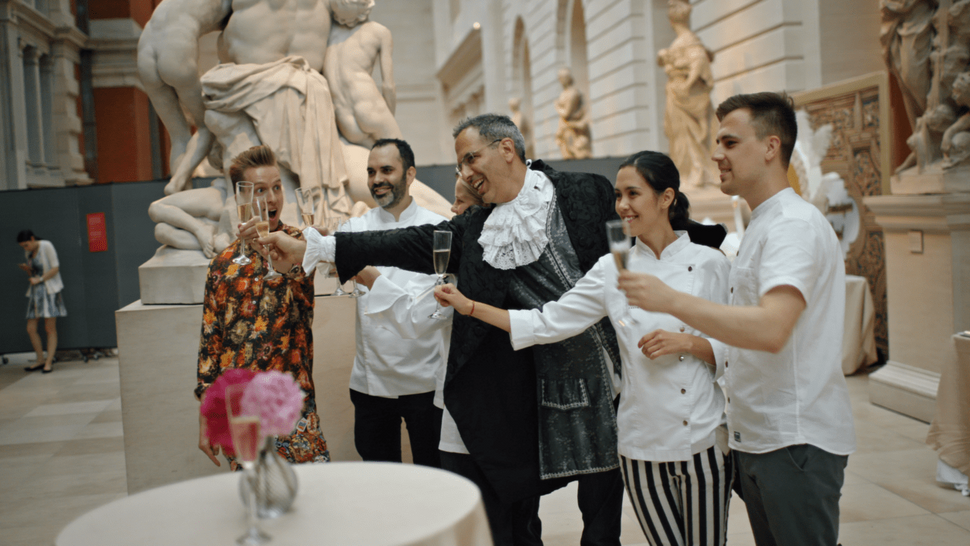 Renowned Israeli chef Yotam Ottolenghi with some of the pastry chefs at the Met gala. Image by JWeekly/IFC

If I had to name the top two things helping me survive the pandemic, I would say my new dog, and watching television — the more escapist, the better. Right now it’s “Schitt’s Creek.” (You haven’t watched it? You must.) But way before that, my escape was “The Great British Baking Show.”

It seems that even before the pandemic, everyone was asking whether I was watching it. For whatever reason, I wasn’t. But when shelter-in-place started, I figured it was as good a time as any. The drama of whether one’s meringues would properly set, or one’s mirror glaze (look it up) would have the proper sheen, or one’s cake would make it without slumping during a heat wave — all discussed in British accents — was able to distract me temporarily from the terrible news.

So when I heard about the new streaming documentary “Ottolenghi and the Cakes of Versailles,” I thought it sounded like “The Great British Baking Show” on steroids.

It is, and then some.

It must be noted that I am about as big a fan of Yotam Ottolenghi’s food as they come. In the beginning of the film, they refer to the celebrated Israeli chef as the most influential cookbook author in the world. I didn’t find that the least bit surprising. I have six of his seven cookbooks, and I’ve been to two of his restaurants in London, where he lives with his husband and two children. I’ve gone to several of his Bay Area events and regularly cook from his books. It was a crazy added small thrill when I learned that my cousin was his commander in the IDF.

Two years ago Ottolenghi received a proposal from the Metropolitan Museum of Art in New York, which was planning an event to go with a forthcoming exhibit on Versailles. The museum invited Ottolenghi to assemble a dream team of pastry chefs to re-envision and modernize the kinds of cakes that might have been eaten as part of the royal court. In short, their challenge was to tell the story of Versailles through cake.

Ottolenghi is shown taking up the challenge with gusto, explaining that he finds recipes more appealing when he knows their backstory. He invites pastry chefs he’s never met but whose work he admires: gelatin enthusiasts from London, a molded cake specialist from Ukraine, an edible-landscape artist from Singapore and others.

For those new to the Ottolenghi universe, director Laura Gabbert weaves a bit of his own story into the film. His business partner, Sami Tamimi, a Jerusalem-born Palestinian with whom he wrote the best-selling “Jerusalem: A Cookbook,” appears in one brief scene.

The film wouldn’t be complete without showing Ottolenghi visiting Versailles for inspiration. Conversations with food historian Deborah Krohn provide historical context as to just what Louis XVI and Marie Antoinette might have eaten. (Shockingly, she debunks Antoinette’s infamous line about the food options of the poor.)

Post-planning, the pastry chefs have only two days to create their masterpieces. Some have never participated in an event on this scale, and of course nothing goes perfectly according to plan. One piece of machinery doesn’t seem to work right, and a chef’s batter/mousse isn’t the right consistency for piping into a mold with a pastry bag. In her case, an older, male chef from the Met mansplains how he thinks she should fix it.

Just as Versailles was the pinnacle of the French monarchy’s excess and visible exertion of power, this event, with its emphasis on consumption and frippery — chefs being flown in from around the world, well-dressed crowds mingling and picking up small plates at buffet tables in museums, images of fine dining — might seem tone deaf now as well, with so many people in dire economic straits.

Of course, Gabbert couldn’t have predicted the state the world would be in when her film came out, but here it is. (She also made the excellent “City of Gold,” about Los Angeles food critic Jonathan Gold.)

What ultimately happened with the French monarchy and the French Revolution is presented in the last few minutes of the film, but only after we are treated to the visual delight of over-the-top excess and master chefs who create works of edible art. Whether you feel that it’s too out of touch with our current reality, or you choose to lose yourself in a film like this right now, is ultimately up to you.

“Ottolenghi and the Cakes of Versailles” (76 minutes, not rated) is available on demand on a variety of streaming services.

Alix Wall is a contributing editor to J. She is also the founder of the Illuminoshi: The Not-So-Secret Society of Bay Area Jewish Food Professionals and is writer/producer of a documentary-in-progress called “The Lonely Child.”

This article appeared originally in jeweekly.com. Reposted with permission.