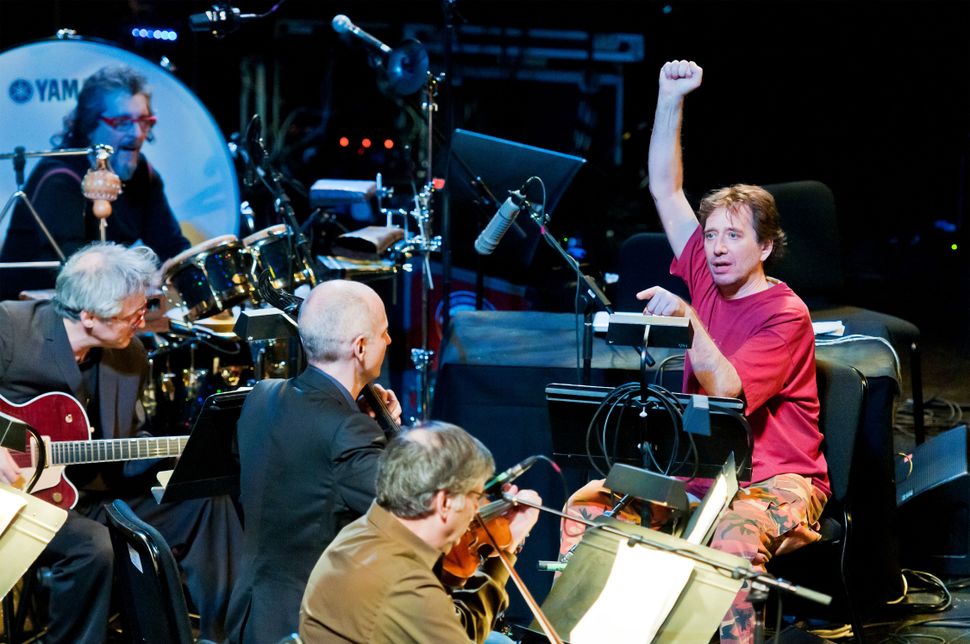 In 1993, John Zorn began composing music based on Jewish themes for a new group, Masada Quartet. Now, 25 years and 613 tunes later, Zorn is closing the book — literally and figuratively — on what evolved into a sprawling, genre-defying series of hundreds of compositions written for dozens of different ensembles, all united by Zorn’s restless, melodic sensibility while adhering to a few basic rules that place them as solidly in the world of Jewish music as any cantor’s melody or rebbe’s nigun.

On May 1, Zorn will release “The Book Beriah,” the third and final collection of recordings contained in the “Masada Songbook.” In physical form, the music manifests as 92 tunes across 11 CDs (or digital albums, or vinyl records, if you prefer), individually titled according to the 11 sefirot, or kabbalistic channels of divine energy. There’s no denying the music’s energy or its Jewish feel — all the tunes are based on Jewish scales and employ the essence of Jewish musical DNA: the use of the augmented second interval. The end result is a Jewish sound familiar from klezmer and synagogue music, albeit rendered in styles ranging from death metal to surf rock to free jazz.

And after 25 years and 613 compositions (for those who miss the significance, the same number of God’s mitzvot, or commandments), what did Zorn, 64, learn about himself as the composer?

“That melody is at the core of much of my work,” he told the Forward, adding that, over the course of his effort “to create a modern, new Jewish music,” he found that “the three books became more and more lyrical.”

For those who have followed Zorn since he emerged on the downtown experimental music scene in the mid-1970s, “melody” and “lyrical” may not be the first two words that come to mind. Improvisation, surprise, angular, jagged, radical, challenging, playful, noisy and unapologetic are terms more typically associated with Zorn’s style.

But Zorn’s Masada project brought out another side of the composer, partly due to the self-imposed musical constraints, but also, perhaps, because of the inspiration the music itself provided.

“The [Jewish] scales are used in traditional ways as well as unique, new, fresh, different ways,” Zorn said. It’s that combination of the familiar and the new that makes the music simultaneously exciting and, dare I say, comforting — definitely not an adjective applied to Zorn’s music with any regularity, which may say more about those who apply adjectives than it does about Zorn’s sound.

The tunes on each of the 11 albums are handed over to different ensembles, each of which imprints the music with its own stylistic approach. Thus, Volume 5, “Gevurah,” features the guitar-heavy group Abraxas, which plays a kind of heavy-metal psychedelic rock — think Frank Zappa meets the Middle East. Volume 7, “Netzach,” on the other hand, presents the shimmering, resonant sounds of the Gnostic Trio, led by well-known jazz-folk guitarist Bill Frisell, with Kenny Wollesen on vibraphone and Carol Emanuel on harp. The sum effect is more heavenly than earthly.

The tracks on “The Book Beriah” were recorded over the past four years for Zorn’s label, Tzadik Records. The recordings are being made available to consumers via the online platform PledgeMusic, where listeners can purchase digital files or order physical CDs or vinyl records. Fans can even get “Book of Beriah” T-shirts with their purchase.

“It’s a new way for distribution,” Zorn said, “a nice way to get the music out there and get a good price for it.”

Zorn is at no loss for what to do next. He has other recordings due out in the next few months, including “Insurrection,” featuring instrumental works for guitar that were inspired by 20th-century experimental fiction, and “In a Convex Mirror,” blending Zorn’s unique saxophone style with Haitian drumming and electronics.

Among the many opportunities to hear Zorn’s music live in the near future is a presentation of his work over the course of 10 days in Lisbon, Portugal, this summer (July 27–August 5), featuring his bagatelles, game pieces, the “Masada Songbook” and a screening of the documentary “Zorn,” directed by French actor Mathieu Amalric. There will also be a 12-hour marathon concert at the Art Institute of Chicago on September 9.

Will we hear additional new Jewish music from Zorn at some point?

“I have learned that it is impossible to predict where I may go next, or what my next project may be,” he told me. “At the moment, there isn’t a Jewish-based project on the horizon — but tomorrow, who knows?”

Seth Rogovoy is a contributing editor at the Forward and the author of “The Essential Klezmer: A Music Lover’s Guide to Jewish Roots and Soul Music, From the Old World to the Jazz Age to the Downtown Avant-garde.”