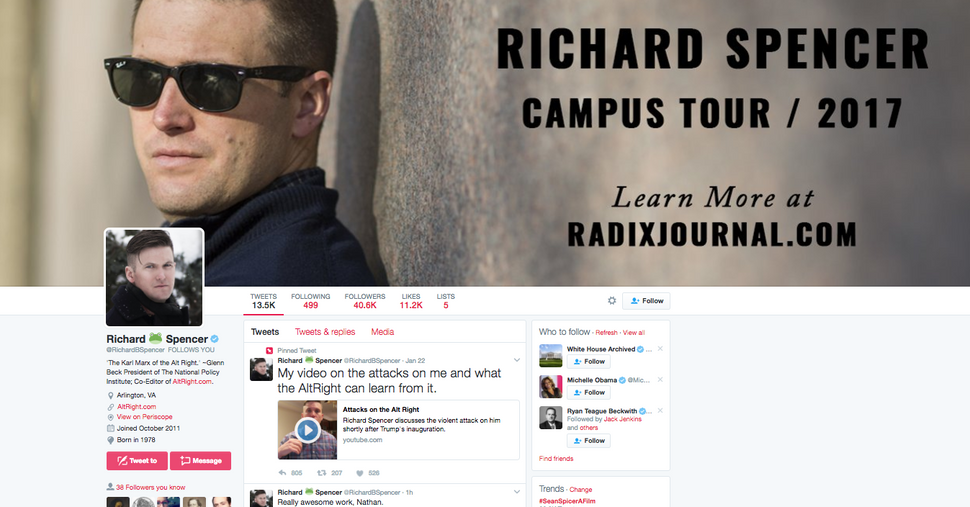 White nationalist Richard Spencer, popularizer of the term “alt-right,” is kicking off 2017 with a tour of college campuses.

On his website Radix Journal, a promotion for the tour bills Spencer as “one of the most politically incorrect men alive.” “He’ll debate your favorite feminist professor … make the SJWs cry … and rustle the jimmies of the campus, if not the world,” the promotion reads.

No stops appear to have been set for what Spencer has dubbed his “Danger Zone Tour,” but his Twitter image now boasts an advertisement.

Spencer announced fundraising for the tour at the end of 2016 in holiday-themed address to his followers. “We’ve already had a huge win when it comes to doing college tours,” he said, citing his appearance at Texas A&M at the beginning of December. “The media was frothing at the mouth for this event,” he said.

“These types of events are tremendous opportunities for us to communicate our message,” he said. “They are ways for us to reach millions of people who would otherwise never have heard our ideas.”

He added: “I felt a bit like a rockstar doing this thing.”

Media provocateur Milo Yiannopoulos, who is also associated with the “alt-right,” is currently visiting college campuses too, on what he is calling the “Dangerous Faggot” tour. Spencer does not consider Yiannopoulos a true member of the white nationalist “alt-right.” In his fundraising message to followers, Spencer promised his tour would be more impactful than the “Dangerous Faggot” tour, which he said was misrepresenting the “alt-right.”