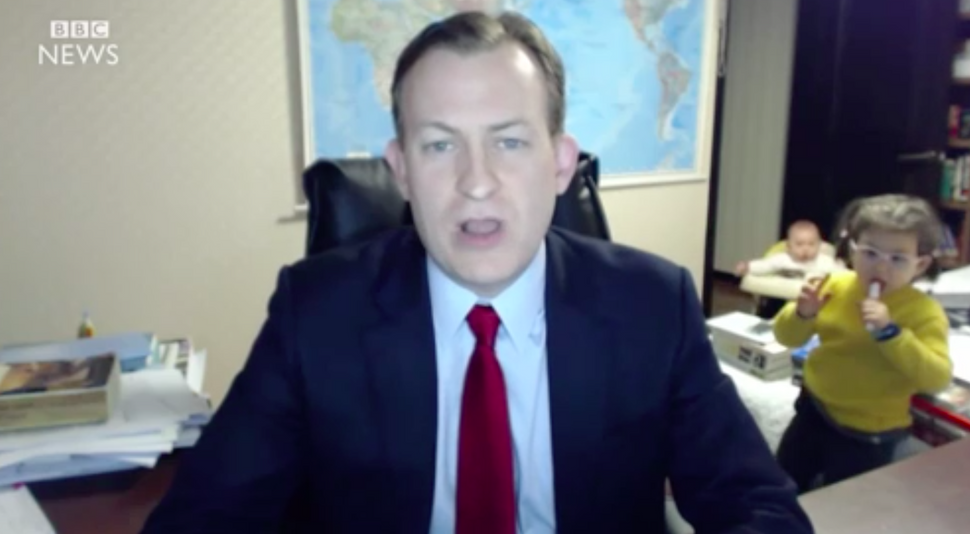 Robert E. Kelly’s BBC interview is interrupted by his kids. Image by Screenshot/BBC

A BBC discussion with South Korea expert went viral last week when the children of Professor Robert E. Kelly burst in on his Skype interview as his wife scrambled to pull them out of the room.

Part of what makes the video so hilarious is the element of surprise, as the somber TV newscast is interrupted by the toddling colorful duo.

To journalists with young children, the video was less surprising than relatable, an illustration of the struggle to maintain a professional front while dealing with the pressures of parenting.

In Israel, a similar situation took a different turn when Karen Seddon gave an interview on French affairs to the Israeli Channel 10 show London and Kirshenbaum with her two-year-old daughter sitting on her lap.

The clip, which was dug up by journalist Lisa Goldman after the BBC clip went viral, is a contrast to the BBC interview in which Kelly tries to bar his daughter from coming closer. Ella was allowed into the studio when she didn’t want to leave her mother’s side, and host Yaron London even chats her.

In a Russia Today clip, Nammari is just finishing a Skype interview when a child’s voice is heard loudly in the background calling for her mother.

Nammari hangs up, as another commentator cracks up.