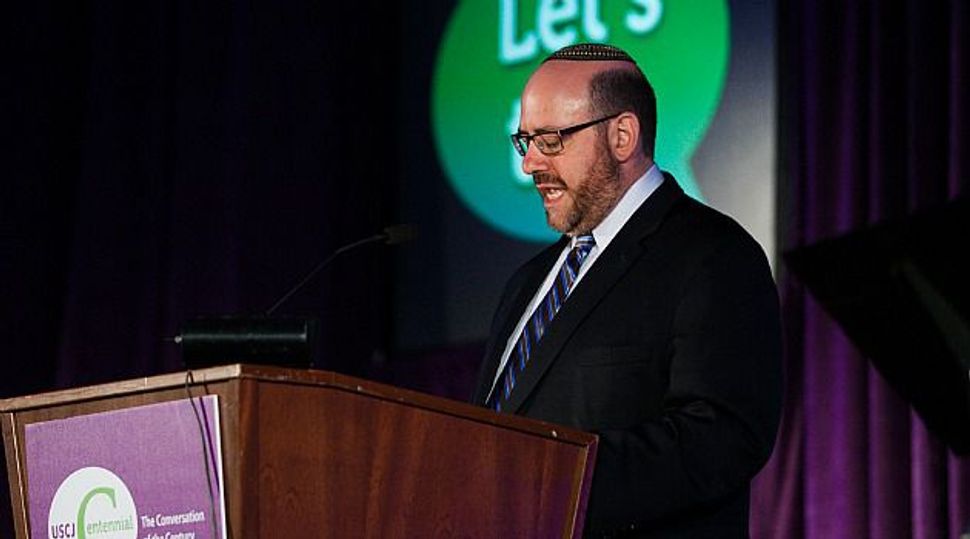 JERUSALEM (JTA) — Israeli and Diaspora Jewry are in a “very precarious place,” the head of the Conservative movement in the United States warned members of Israel’s Knesset.

Rabbi Steven Wernick, CEO of The United Synagogue of Conservative Judaism, spoke Tuesday in front of the Knesset Committee for Immigration, Absorption and Diaspora Affairs, which was meeting in a special session devoted to Israel’s image abroad.

“We are on the edge; on the edge of very real, very serious and very harmful distancing of Israeli Jewry with Diaspora Jewry,” Wernick said in his remarks.

Wernick addressed the committee in the wake of two government decisions, taken on the same day nearly two weeks ago, which “sends a message of disrespect and delegitimization of Klal Yisrael,” he said, using a term for the Jewish people. One decision was to freeze the agreement to expand an egalitarian prayer section at the Western Wall. The second was to advance legislation giving the Chief Rabbinate complete control over conversions in Israel.

“Our feelings go beyond the intellectual, they are emotional,” he added. “If we are brothers and sisters, if we are family, then the sense of betrayal feels like abandonment.”

The rabbi pointed out that North American Jewry has lobbied their governments for political, economic and strategic support for Israel; responded to the BDS movement against Israel and the United Nations’ delegitimization of Israel; invested billions of dollars in Israel and sent billions in charitable contributions; supported aliyah and sent their own children as lone soldiers.

He reiterated that Diaspora Jewish supporters of Israel do not support Israel for any benefit. “We support Israel because we are Zionists. We share the vision of a nation-state for the Jewish People — ‘lihiyot am chofshee b’artzaynu,’” or a free people in our land, he said.

“And an essential element of that vision, a key ingredient of what it means to be a free people in our land, is for our religious expressions that give meaning to our Jewish identities and lead us to be Zionists are respected and supported in our Jewish homeland by its government,” he added.

“On the issues of religious pluralism in the Jewish State we have lost our patience and that’s why we’ve seen the response we have,” he added. “It is no longer acceptable for Israel to simply claim it is the Jewish Homeland without it actually being the Homeland of all the Jews.”

Wernick concluded by calling on the Knesset to be the “Parliament of the Jewish people.”