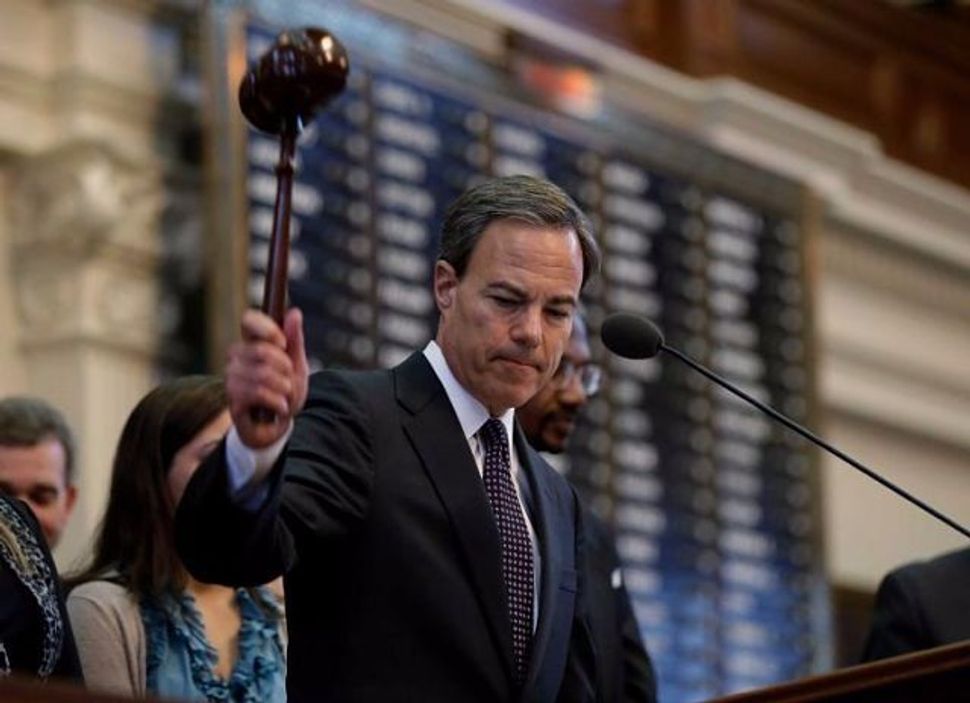 Joe Straus, the moderate Republican speaker of the Texas House. Image by Watchdog.org

WASHINGTON (JTA) — Joe Straus, the Jewish Republican who is speaker of the Texas House of Representatives, is retiring, in part because of disunity in his own party.

Straus, first elected to the House in 2005, said in a post Wednesday on Facebook that he was leaving the speaker’s seat and the House next year in part because he felt his time had come.

“I believe that in a representative democracy, those who serve in public office should do so for a time, not for a lifetime,” he said.

Straus, a moderate who has faced repeated challenges from the party’s right for working with Democrats, also cited divisiveness he said that some in his party were now stoking, and included an allusion to President Trump.

“Instead of acting on behalf of the entire House, I will now have a greater opportunity to express my own views and priorities,” he said. “I will also continue to work for a Republican Party that tries to bring Texans together instead of us pulling us apart. Our party should be dynamic and forward-thinking, and it should appeal to our diverse population with an optimistic vision that embraces the future. I plan to be a voice for Texans who want a more constructive and unifying approach to our challenges, from the White House on down.”

Straus clashed with conservatives in his party, particularly Lt. Gov. Dan Patrick, most notably when he killed a measure that would have restricted bathroom use on the basis of birth gender.

In 2011, conservative Republicans in the state denounced calls from some grassroots activists to replace Straus because he was not a Christian.