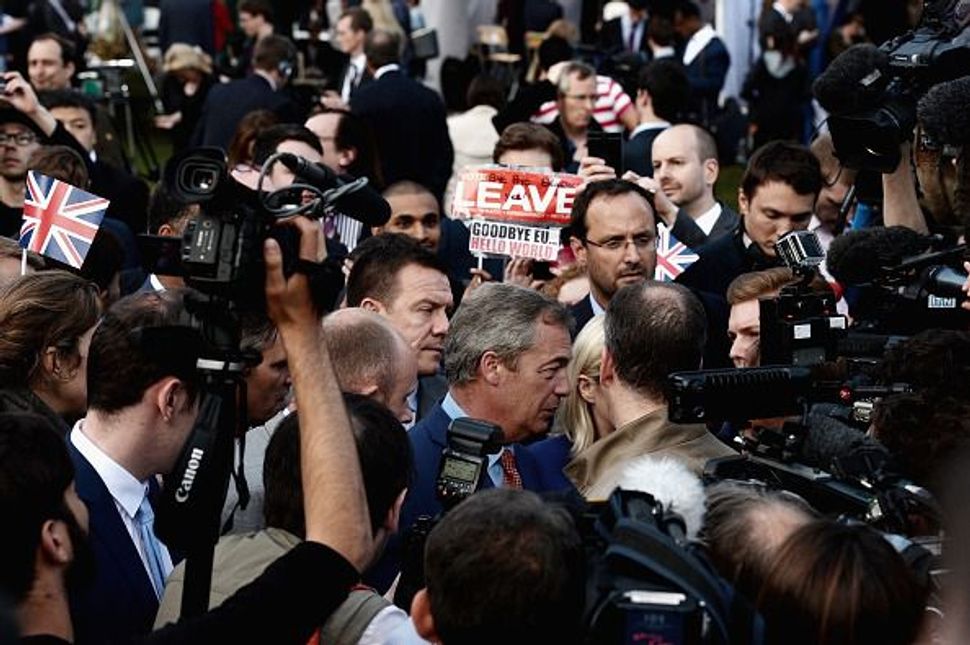 (JTA) — The former leader of a nationalist political party in Britain with close ties to President Donald Trump said that American Jews have a disproportionate influence over politics.

Nigel Farage, the ex-head of the Independence Party and now a talk show host on the LBC radio station, made the remarks Monday on while discussing whether Russian influence had aided Trump’s election in the wake of the first charges being brought against Trump administration officials.

A caller named Ahmed told Farage that he thought the pro-Israel lobby in the United States was as dangerous as alleged Russian interference, leading Farage to respond: “Well, the Israeli lobby, you know, that’s a reasonable point, Ahmed, because there are about 6 million Jewish people living in America, so as a percentage it’s quite small, but in terms of influence it’s quite big.”

He added: “Well, in terms of money and influence, yep, they are a very powerful lobby,” and “there are other very powerful foreign lobbies in the United States of America, and the Jewish lobby, with its links with the Israeli government, is one of those strong voices.”

Several listeners contacted the watchdog group Campaign Against Antisemitism following Farage’s remarks. In a statement on its website, the group called on Farage to “immediately withdraw his deplorable comments” and to apologize for them, or that LBC should remove him from his time slot. The group said it would ask Britain’s communications regulatory office, known as Ofcom, to open an investigation.

Farage, who was a key supporter of Brexit, the British exit from the European Union, resigned as head of the Independence Party in July 2016.  The same month he visited the Republican National Convention in Cleveland, where he met with Trump aides. He is reported to have close ties to former White House strategist Stephen Bannon.