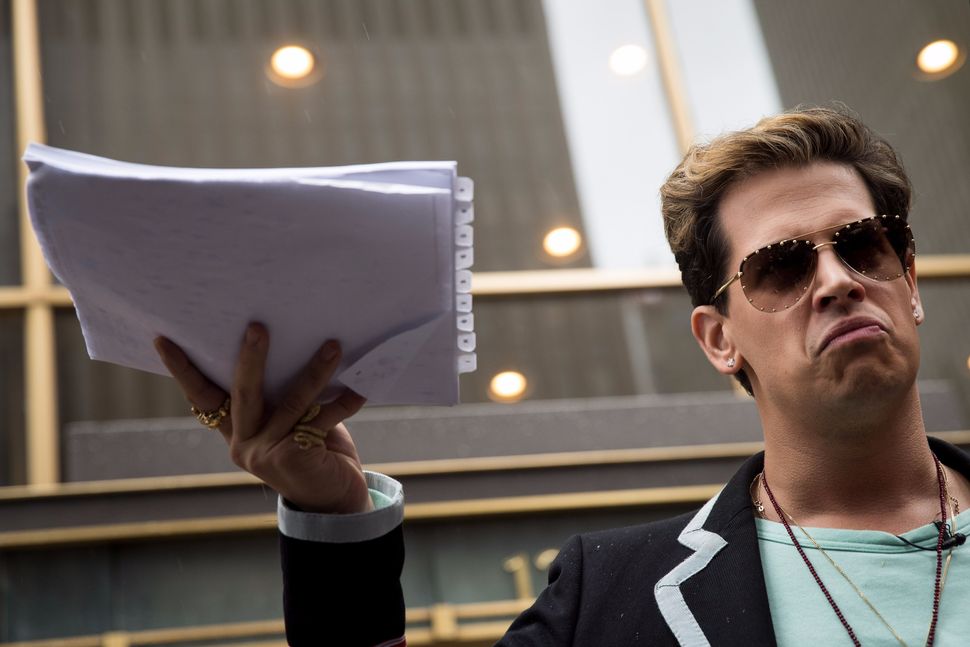 Milo Yiannopoulos holds a copy of his complaint against Simon & Schuster in front of the company’s New York offices in July. Image by Getty

Right-wing provocateur Milo Yiannopoulos, once one of the most prominent promoters of the “alt-right” white nationalist movement, has gotten rid of his lawyers and is choosing to represent himself in his $10 million lawsuit against the publishing company that dropped his book after it emerged that Yiannopoulos had defended pedophilia.

Lawyer Jeffrey Weingart wrote in court documents on Friday that there had been “a breakdown” in his relationship with Yiannopoulos because of “irreconcilable differences.”

In response, Yiannopoulos released a statement Monday saying that while his law firm had served as “excellent litigators,” he would serve as his own representation in his suit against Simon & Schuster.

His statement said that in pre-trial motions, the publishing company “demanded that virtually all of the documents in this lawsuit remain confidential, and had them classified ‘attorney’s eyes only,’ meaning that I am not even allowed to see what has been said about me and my book in my own lawsuit.” Serving as his own attorney will allow him to see that material, he said.

The editor’s notes to the manuscript of Yiannopoulos’ book “Dangerous” was entered into court records last month, revealing hundreds of comments from editor Mitchell Ivers that the book was “tiresome,” “phenomenally petty” and full of “too much ego.”

“Ivers considered Plaintiff’s first draft to be, at best, a superficial work full of incendiary jokes with no coherent or sophisticated analysis of political issues of free speech… Plainly, it was not acceptable to Simon & Schuster for publication,” the publishers argued.