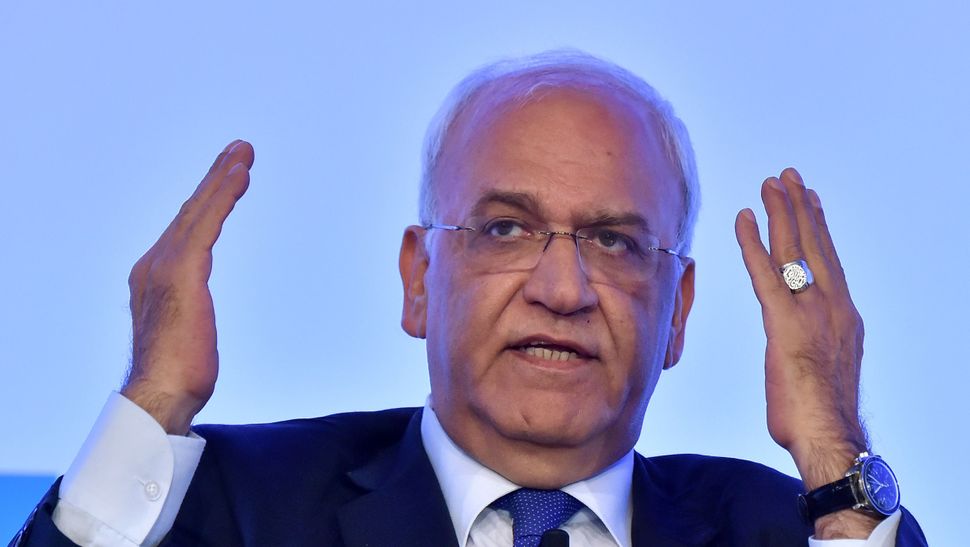 A senior Palestinian official accused the Trump administration of trying to cause a “coup” of Palestinian leadership and blasted the United States’ ambassador to the United Nations, Nikki Haley, telling her to “shut up” her criticism of Palestinian Authority President Mahmoud Abbas.

Saeb Erekat, the P.A.’s lead peace negotiator and the secretary-general of the Palestine Liberation Organization, complained in an interview with the Palestinian news agency al-Watan that Haley had “called for overthrowing the democratically elected Palestinian president.”

After Abbas gave a speech last month that denied the Jewish historical connection to Israel and blasted the Trump administration’s recognition of Jerusalem as Israel’s capital, Haley responded in a speech at the U.N.

“A speech that indulges in outrageous and discredited conspiracy theories is not the speech of a person with the courage and the will to seek peace,” she said.

Erekat claimed that such remarks amounted to a “coup” against the “Palestinian political system,” and that the U.S. and Israel wanted to “undermine the Palestinian national project.”

“Nikki Haley needs to shut up and realize that the Palestinian leadership is not the problem,” he said. “Instead, the problem is the Israeli occupation and the policies it continues to pursue. I’m not saying that we don’t make mistakes; every society and every government makes mistakes.”

Palestinian leadership boycotted Vice President Mike Pence’s recent trip to Israel, in protest of the Trump administration’s policies, which also include cutting aid to the U.N.’s Palestinian refugee agency. But Erekat said that they aren’t the ones being confrontational.

“The U.S. administration is itself saying that it’s not an honest broker in the peace process,” Erekat added. “Therefore, we are seeking, together with international parties, to convene an international conference for peace.”