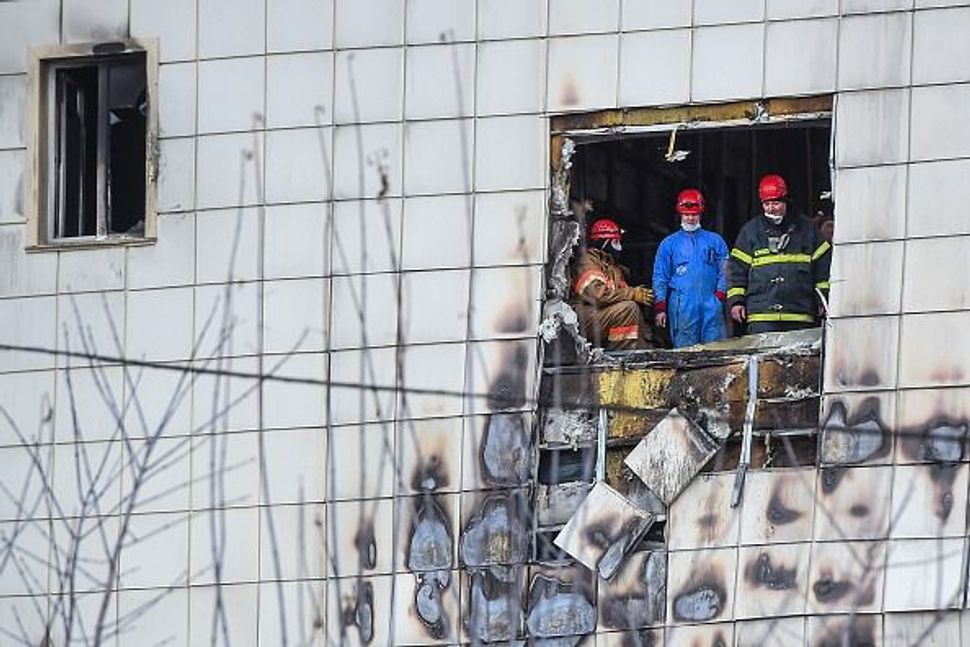 Russian emergency service staff work at the site of a fire at a multi-storey shopping centre in Kemerovo on March 27, 2018. Image by Getty Images

It didn’t take long for the anti-Semitic accusations to emerge after a movie theater in the Siberian city of Kemerovo caught fire on Sunday, killing 64 people (41 of them children).

Russian social media today has been swirling with blood libels, pointing to the Jews for orchestrating the fire on the eve of Passover.

“There are many questions,” a Kemerovo businessman Artyom Nikiforov, with a large social media following, said in a video he posted on Facebook, which has since gone viral. “I want to draw your attention to this — I do not believe this is a coincidence. This tragedy occurred on the eve of the Jewish holiday of Passover.” Nikiforov noted that several Russian disasters took place around Jewish holidays. “For me, this is clearly ritual sacrifice of the Chosen People. I do not believe in these coincidences.”

“In Kemerovo, there has been a mass slaughter of ‘goy’,” Russian blogger Andrei Ivliev posted on his VK profile. “A question remains: When will the Russians wake up from the [Jewish] narcotic?”

Russian officials are still investigating what exactly started the fire, pointing to lax fire safety standards and corruption as the cause. According to investigators, the theater’s fire exits had been illegally blocked, the public address system had been switched off, the alarm system was broken, and the children had been locked inside the cinema. President Vladimir Putin, just re-elected this month, flew to the city and promised that those responsible for “criminal negligence” would be punished. 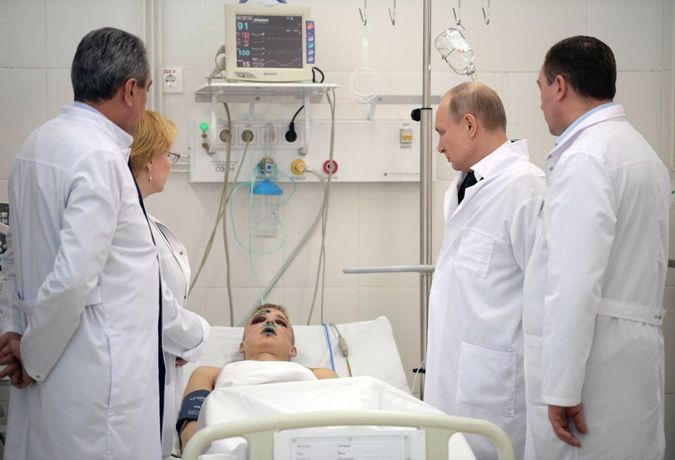 Russian President Vladimir Putin visits people injured in a fire at a shopping centre, at a hospital in Kemerovo on March 27, 2018. Image by Getty Images

The online accusations arise amid a greater national debate, as Kemerovo locals — and Russians across the country — are taking to social media to dispute the official death toll, insisting that the numbers are much higher than being reported by the government and media. Putin has flatly denied the allegations.

One conspiracy theorist on LiveJournal suggested that among the many corrupt beneficiaries of those who originally built the Kemerovo shopping center are the Jews — “Their holiday is approaching – Pesach. And where there are Jews, there is always blood, violence and evil – the Jews themselves tell about this in the Torah (the Old Testament).” Another blogger, “Notes from a National-Libertarian”, wrote: “The burning of the Russian people in Kemerovo in the shopping center ‘Winter Cherry’ , this is nothing more than a ritual sacrifice, a sort of cherry on a cake.” 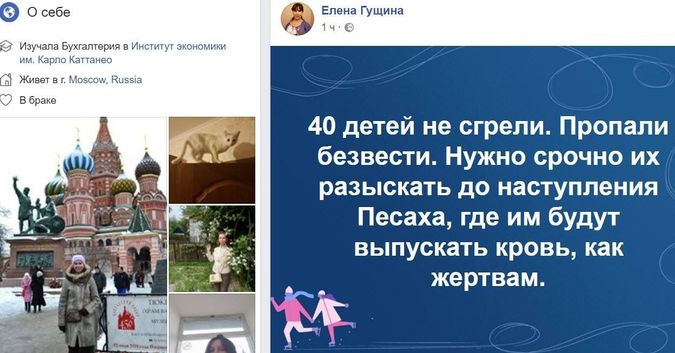 Elena Gushina, a Moscow resident, posted on Facebook that the children are not dead but rather have been kidnapped by the Jews “before Passover”. Image by Facebook screenshot

“40 children were not burned,” Elena Gushina, a bookkeeper in Moscow, posted on her Facebook. “They disappeared without a trace. We must immediately search for them before the holiday of Passover, when they will be bled, as sacrifices.”

Vladimir Suvorov, a Russian citizen living in New York, posted an image of the Jewish calendar, from the Russian Jewish website Toldot.ru, and noted the proximity of the tragedy to Passover. “Where are the photos/videos of the hospitals flooded with corpses?” he asked. “In our digital era, it is impossible that not a single person didn’t photograph what is being said on the record.”