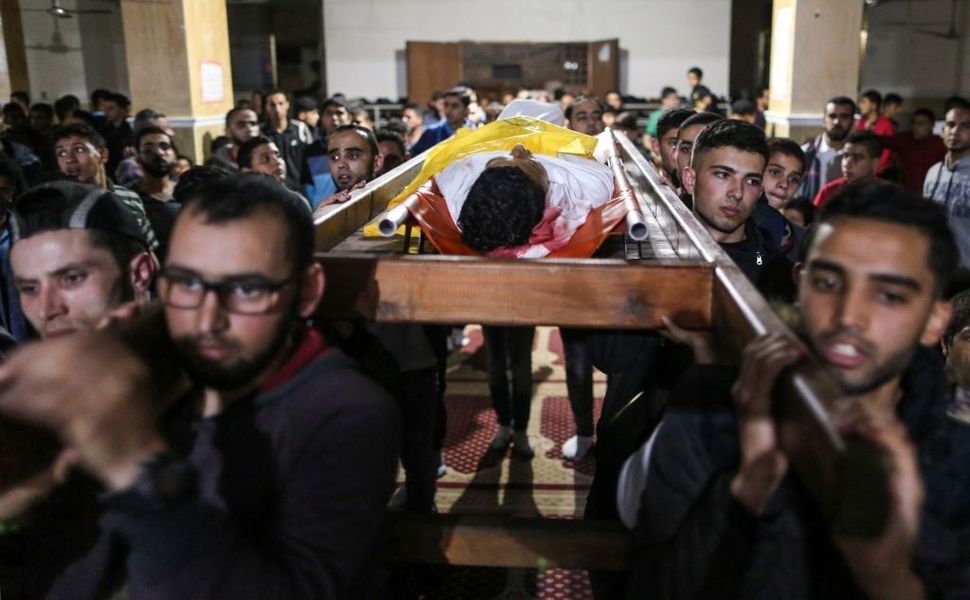 Relatives of 15-year-old Palestinian Mohammed Ibrahim Ayoub, who was shot and killed by Israeli security forces during clashes along the Israel-Gaza border, carry his body during his funeral in Beit Lahia in the northern Gaza strip on April 20, 2018. Image by STRINGER/AFP/Getty Images

JERUSALEM (JTA) — Israel’s military is investigating the death of a Palestinian teen killed during protests on the Gaza-Israel border.

Mohammed Ayoub, 15, was killed Friday during the fourth week of protests along Gaza’s border with Israel, part of the so-called “Great March of Return.” His shooting about 100 meters from the border was captured on video. It appears that the teen was shot in the head.

About 10,000 protesters gathered at the border on Friday. According to the IDF, “the terror organizations in the Gaza Strip, headed by Hamas, continued to use civilians, including youth and children, as a disguise for different terror acts to damage security infrastructures.”

The IDF said that Ayoub was heading for the main border fence when he was shot. The IDF later released photos of young Palestinian boys using the cover of firebombs to attempt to breach the border fence.

Prior to the start of Friday’s protests, the IDF dropped leaflets warning residents to stay away from the border fence.

“It is outrageous to shoot at children! How does the killing of a child in Gaza today help peace? It doesn’t! It fuels anger and breeds more killing. Children must be protected from violence, not exposed to it, not killed! This tragic incident must be investigated,” UN Middle East envoy Nickolay Mladenov said in a tweet.

Some 35 Palestinians have been killed since the start of protests on March 30. They are scheduled to last until May 14, the date on the Gregorian calendar that Israel was declared a state, which the Arab world calls the Nakba, or Catastrophe.

“The leaders of Hamas are the only culprits in the death of the boy, the cowardly leaders who hide behind children and women and send them forward as human shields so that they can continue digging attack tunnels and carrying out terror attacks against the State of Israel,” Liberman said.