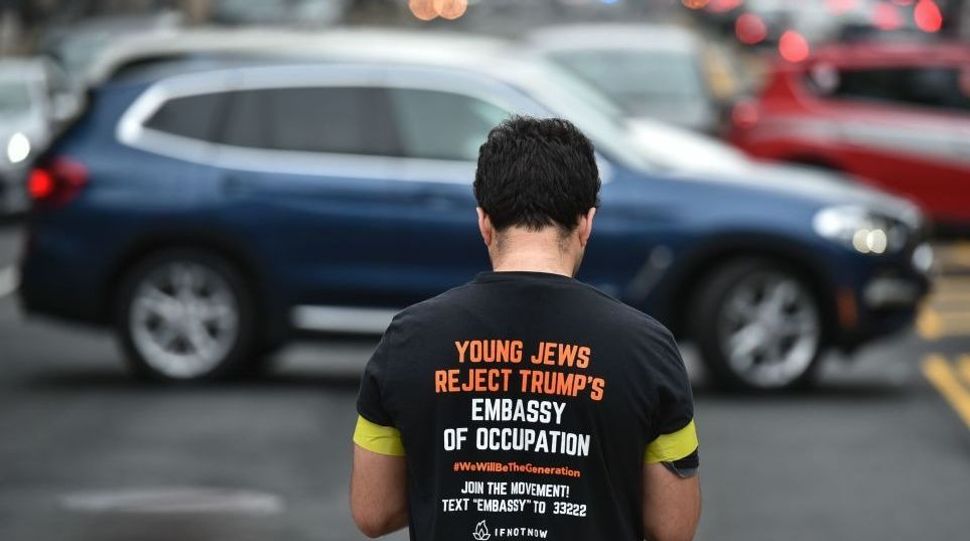 Dozens of chanting, singing Jewish demonstrators blocked a major Washington thoroughfare on Monday to denounce President Trump’s moving the U.S. Embassy to Jerusalem and Israel’s killing of Palestinian protesters on the Gaza border.

Chanting “Stop the violence,” about 100 protesters from the IfNotNow movement blocked Pennsylvania Avenue, which links the White House and the white-domed Capitol, for about two hours in front of the Trump International Hotel.

“The shelter of peace must extend to Palestinians as well,” Sarah Brammer-Shlay, a 26-year-old rabbinical student from Philadelphia and a protest organizer, told the demonstrators.

Protesters, many wearing skullcaps and black T-shirts stating that “the Jewish future demands Palestinian freedom,” sang “We will build this world with love.” They also carried mock building parts and directional signs for an “Embassy of Freedom” to replace what they called the “Embassy of Occupation” in Jerusalem.

Speakers repeatedly updated the crowd on the death toll from the Gaza border, where at least several dozen people among the thousands protesting the opening of the U.S. Embassy in Jerusalem were killed by Israeli troops.