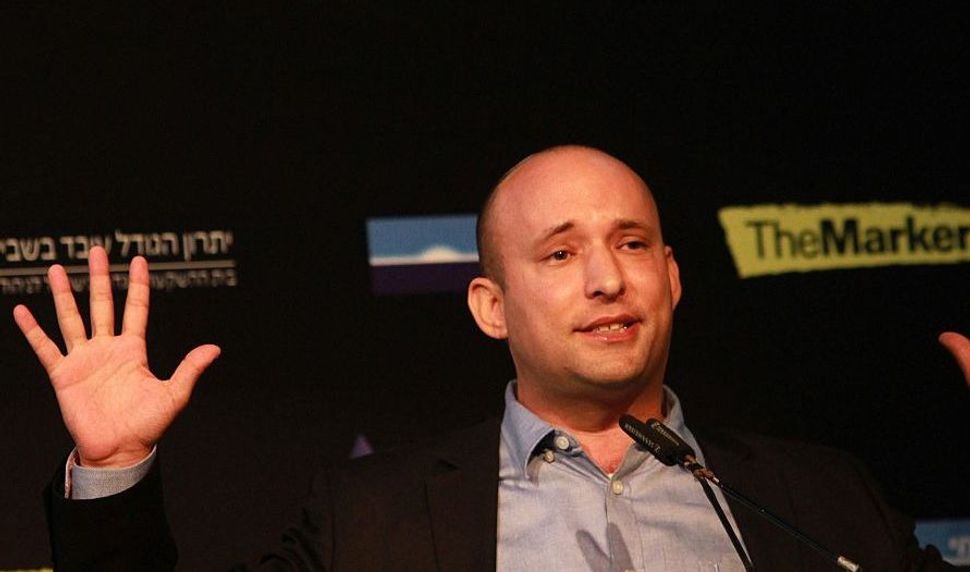 Naftali Bennett, Israel’s far right wing Minister of Diaspora Affairs, drew a parallel on Sunday evening between the gunman who massacred 11 Jews in a Pittsburgh synagogue during Shabbat morning services and Hamas militants.

Addressing a memorial vigil sponsored by the Jewish Federation of Greater Pittsburgh, Naftali Bennett said: “From Sderot to Pittsburgh, the hand that fires missiles is the same hand that shoots worshippers. We will fight against the hatred of Jews, and anti-Semitism wherever it raises its head. And we will prevail.” Sderot is a town close to Israel’s Gaza border that regularly comes under rocket attack by Hamas.

From lynchings to mass shootings: The history of deadly attacks on Jews in America ■ Opinion: It’s not just Trump fueling the anti-Semitism that’s killing Jews in America

Bennett, who is also the education minister and the head of the Orthodox, settler-aligned Habayit Hayehudi party, was sent to Pittsburgh as the most senior representative of the Israeli government at the commemoration event. In addition to attending the vigil, he met with leaders of the Pittsburgh Jewish community, with Pennsylvania Governor Tom Wolfe, with Pittsburgh Mayor Bill Peduto and with Rabbi Jeffrey Myers, the spiritual leader of Tree of Life, the Conservative congregation that was attacked.

The gunman, identified as 46-year-old Robert Bowers, is believed to have singled out this congregation because of its connection to HIAS, an refugee advocacy organization targeted in several of his social media posts. A Reconstructionist congregation that uses the same synagogue facility was featured on a list of participants in a special HIAS-organized event held a week earlier that was meant to welcome refugees into the Jewish community

Bennett supports the deportation of African asylum-seekers in Israel and pressured Netanyahu six months ago to back out of a deal that would have allowed many thousands of them to remain permanently in the country.

Addressing more than 4,000 participants at the Pittsburgh vigil, Bennett said: “We stand together, as Jews from all communities united, as well as members of all faiths. Together we stand. Americans, Israelis. People who are together saying ‘no ‘to hatred. The murderer’s bullet does not stop to ask: Are you Conservative or Reform, are you Orthodox? Are you right wing or left wing? It has one goal, and that is to kill innocent people. Innocent Jews.”

While Bennett was addressing the event as the official envoy of the Israel government, an alternative protest vigil attended by about 100 left-wing Jewish activists was being held a few blocks away. It was organized by IfNotNow, an anti-occupation group that was vehemently opposed to Bennett’s presence at the official commemoration events because of the positions his party embraces.

Addressing the group, Moriah Ella Mason, an activist in the group from Pittsburgh, said: “Tonight our Pittsburgh Jewish community heard from Naftali Bennett, the far-right, racist Israeli politician whose party has openly advocated for ethnic cleansing, described African migrants as ‘infiltrators,’ and bragged about killing Arabs,” she said. “These are the same types of policies and rhetoric espoused by Trump, and the same types of policies and rhetoric that have unleashed violence against my community.”