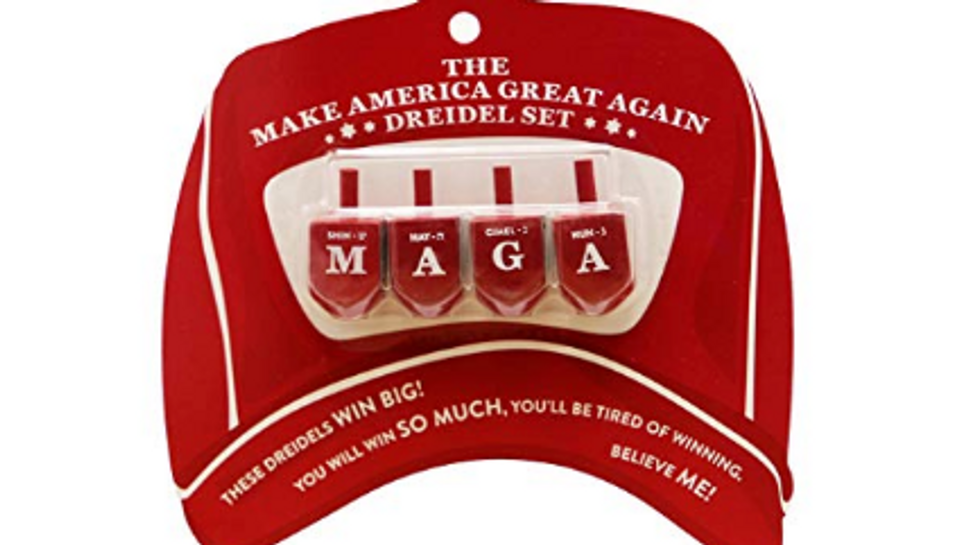 Hanukkah comes early this year, and Amazon has an interesting gift for Jewish supporters of President Trump: a red Make America Great Again cap with a matching set of dreidels.

Made by The Dreidel Company, the Make America Great Again Dreidel Set comes with four attached dreidels, each one labeled with the MAGA acronym: Shin has the M, Hay the A, Gimel the G and Nun has the other A.

The bill of the hat reads, “These dreidels WIN BIG!” and “You will win SO MUCH, you’ll be tired of winning. Believe ME!” The back of the package has game directions and similar Trump-inspired one-liners.

Three-fourths of the comments are positive, with one reviewer raving over “the numerous” parallels between Hanukkah and Trump.

“Trump becoming President is the miracle of our time. Hanukkah was the miracle that took place in its time. Hanukkah represents 8 days and nights that the candles remained lit. Trump represents the 8 years that he will remain president. The Hannukah dreidel has 4 letters on it. MAGA Is 4 letters as well. The dreidel spins round and round. Trump makes Liberal’s heads spin round and round. On Hanukkah we party for 8 days and nights. During Trump’s 8 years, every day and night is a party.”

Another reviewer was not as pleased, writing, “THIS IS INCREDIBLY OFFENSIVE.”