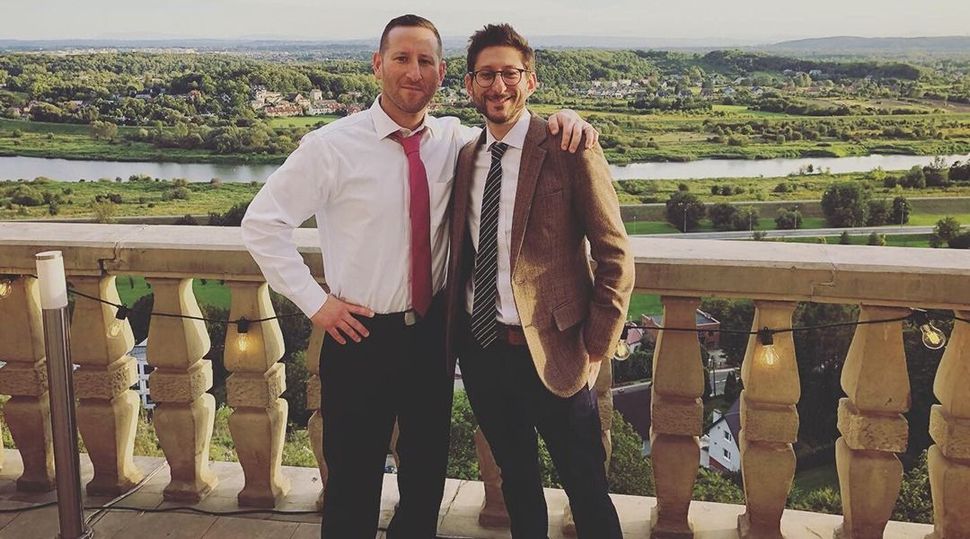 Danny Fenster, right, with his brother Bryan at a friend’s wedding in Krakow, Poland, September 2019. It was the last time they saw each other. Courtesy of Bryan Fenster

(JTA) — (Detroit Jewish News via JTA) — On his way home for a surprise visit to see family and friends, Jewish journalist Danny Fenster was detained Monday in Myanmar, where he works for a news site in the country’s largest city of Yangon.

Fenster is among the many journalists who have been detained, imprisoned or expelled from the country since a military coup took control of its government in February.

The 37-year-old Detroit native was detained at Yangon International Airport shortly before boarding a flight to Kuala Lumpur and is being held in Insein Prison, which has a notorious and well-documented reputation for its deplorable conditions for political prisoners.

Bryan Fenster assumes his brother is being detained because he is a journalist who has been covering the coup in Myanmar. Since then, Myanmar’s military government has arrested about 80 journalists, according to media reports, which said that Fenster is the fourth foreign journalist to be detained.

Bryan Fenster last saw his brother at a friend’s wedding in Krakow, Poland, in September 2019. He said his younger brother, a graduate of Columbia College of Chicago and Wayne State University, had been working as a journalist in Asia for about three years. He had positions in Thailand and was working for another media outlet in Myanmar before the military government shut it down. Then he joined the staff of Frontier, an independent news site.

“We do not know the exact reason why he is being detained or of his physical condition,” Bryan Fenster said in an interview with the Detroit Jewish News. “The good news is that we’ve been able to get in touch with the right people. Local [congressional] representatives, Governor Whitmer and the U.S. State Department are aware, and they are working on it.”

On Tuesday, U.S. Rep. Andy Levin, a Michigan Democrat who is Jewish, along with all 16 members of the Michigan congressional delegation, sent a letter to Secretary of State Antony Blinken urging the State Department to secure Fenster’s immediate and unconditional release.

Levin said he spent a great deal of time on Tuesday speaking with Bryan Fenster, as well as the State Department and the U.S. ambassador to Myanmar, Thomas Vajda. Levin said Vajda is “leaving no stone unturned” in efforts to release the journalist.

“I was very reassured after speaking to Ambassador Vajda and learned all he is doing to win Danny’s release,” said Levin, who serves in Congress on the Foreign Affairs Committee and is the vice chair of the subcommittee on Asia, the Pacific, Central Asia and Nonproliferation.

In March, Levin sponsored a House resolution that condemned the military coup in Myanmar. It passed in a 398-14 vote.

“Vajda has thorough, measured and strong experience in protecting Americans in every country he has served in as ambassador,” Levin said. “Washington is coming at this at all angles to release him.”

In February, the military detained Myanmar’s civilian leader Aung San Suu Kyi, who won the Nobel Peace Prize in 1991 for her support of democracy. The military declared a state of emergency, claiming there was voting fraud in elections that Suu Kyi’s party had won, according to observers.

The United States and other nations have harshly criticized Myanmar’s military leaders for the coup.

The post Jewish journalist from Detroit detained in Myanmar while trying to leave the country appeared first on Jewish Telegraphic Agency.