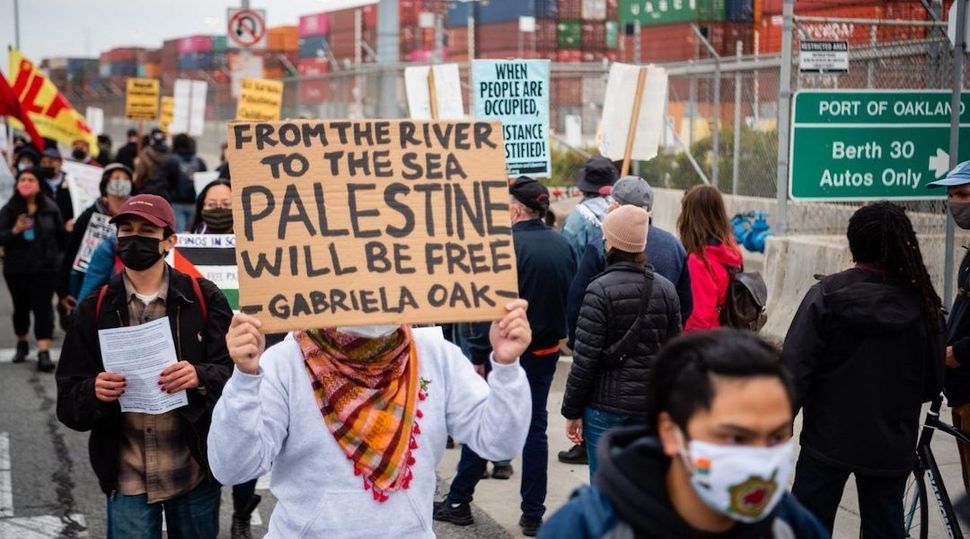 Protesters at the Port of Oakland on June 4, 2021, where they halted a container ship owned by the Israel-based Zim Integrated Shipping Services Ltd. in a campaign tied to the BDS movement. (Brooke Anderson via J: Jewish News of Northern California)

(JTA) — (J. The Jewish News of Northern California via JTA) — Anti-Israel protesters at the Port of Oakland are claiming victory in preventing a Zim container ship from unloading its cargo on Friday, and organizers were planning further actions this week against ships of the Israeli-owned firm in other port cities.

The Volans, a container ship owned by the Haifa-based Zim Integrated Shipping Services Ltd., docked in Oakland but turned back out to sea later in the day after workers with the International Longshore and Warehouse Union Local 10 declined to cross the line of protesters to unload the ship’s cargo.

It was the first time in seven years that a Zim container ship came into Oakland’s port.

The action was led by the San Francisco-based Arab Resource and Organizing Center, or AROC, as part of its weeklong “Block the Boat” campaign conceived as a response to Israeli actions in Gaza during the 11-day conflict last month. Protests were scheduled at ports including Seattle, Los Angeles and New York in support of the Boycott, Divestment and Sanctions movement, which seeks to damage Israel’s economy over its policies toward the Palestinians and occupation of the West Bank. Estimates of the number of protesters in Oakland ranged from 100 to 500.

Protesters have criticized Zim as an Israeli government entity, but the company was privatized and restructured some time ago.

An employee in the human resources department of Zim’s U.S. headquarters in Virginia told J. by phone on Friday that the company “would not be commenting” on the situation.

The company did give a statement to the London-based Middle East Eye.

“Due to operational constraints and long delays in the port of Oakland, and in order to meet schedule departures in the Far East, we will be calling on other US West Coast Ports until further notice,” Zim said, not mentioning the protests.

In August 2014, during the last major Israel-Hamas conflict, the Zim-owned Piraeus was met with protesters at the Port of Oakland and turned back out to sea, waiting quietly and then returning in the evening to port, where the ship was unloaded overnight by longshoremen.

A union statement said the workers’ initial refusal was due to the “volatility” of the environment. The next month, a second Zim ship was prevented from unloading in Oakland, and in October of that year, a third Zim ship bypassed Oakland.

A version of this article originally ran in J. The Jewish News of Northern California.