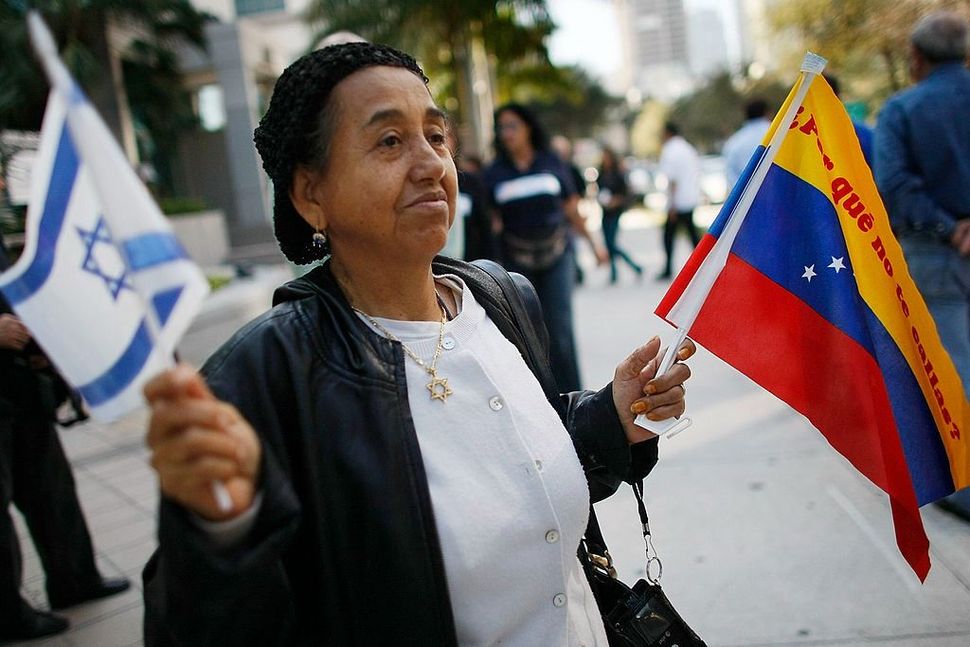 Kenia Videla gathers with others in front of the Venezuelan consulate to show solidarity with the Venezuelan Jewish community after a recent attack on a Caracas synagogue on February 13, 2009 in Miami, Florida. Photo by Joe Raedle/Getty Images

An English-language glossary of antisemitic terms has been translated to help combat anti-Jewish rhetoric in the Spanish-speaking world.

Recently released by the American Jewish Committee,Traduciendo el Odio, or Translate Hate, is a digital glossary of 40 words and phrases. It explains how each term is used antisemitically, and gives real life examples from tweets to posters to newspaper articles.

The glossary’s Spanish equivalent includes well-worn phrases of traditional antisemitism, such as “elite cosmopolita” or “global elite,” but also newer symbols of digital hate like the (((echo))), a triple parenthesis placed around names online to indicate the individual is Jewish.

It defines the relatively new term “Holocough” as a call from the far right to spread the coronavirus to Jews to eliminate them.

“There is no glossary in Spanish like Traduciendo el Odio,” Dina Siegel Vann, director of AJC’s Belfer Institute for Latino and Latin American Affairs, said in a press release. “Better informing Spanish speakers across the United States and around the world about hateful rhetoric and images targeting Jews is vitally important to the global fight against antisemitism.”

Since the original Translate Hate was published in English in 2019, it has been downloaded tens of thousands of times, and used by law enforcement and government officials, according to the AJC.

While many of the words and phrases in the glossary are rooted in American ultra-right and white supremacy movements, excerpts from Holocaust deniers on social media in Venezuela, Colombia, and Brazil are highlighted in the guide as well, along with depictions of graffiti in Argentina and Chile that the AJC has deemed antisemitic.

Traduciendo El Odio uses the definition of antisemitism adopted by the International Holocaust Remembrance Alliance in 2016 — a definition that has been criticized by progressive groups as stifling of legitimate criticism of Israel.

The guide also includes a section on how to denounce hate on various social media platforms, and a directory of Jewish organizations in 18 Spanish-speaking countries and Puerto Rico to which instances of antisemitism can be reported.

The AJC also plans to expand its multilingual campaign with a Portuguese version of Translate Hate.