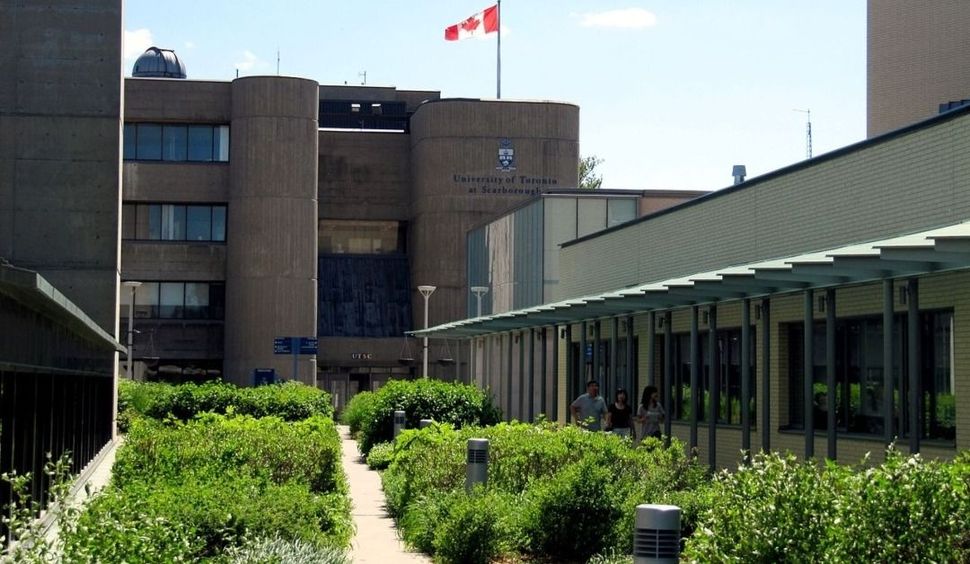 The campus of University of Toronto-Scarborough. (Wikimedia Commons)

(JTA) — After an outcry and a rebuke from the University of Toronto president, the student union at a satellite campus modified a proposed ban on kosher foods in any way affiliated with Israel, but a campus Jewish campus group said the change made matters worse.

The board of directors of the University of Toronto Scarborough Campus Student Union convened for an emergency meeting Dec. 1 to address the outcry after a Nov. 24 resolution affirming the union’s boycott, divestment and sanctions policy regarding Israel placed restrictions on kosher food distribution.

The emergency meeting removed from the earlier pro-BDS resolution a passage that said: “Efforts should be made to source kosher food from organizations that do not normalize Israeli apartheid, however recognizing the limited availability of this necessity then exemptions can be made if no alternatives are available.”

The revision came after condemnations by Jewish students on campus, the university leadership and Canadian Jewish organizations. B’nai B’rith Canada said the original resolution would have “effectively shut down Jewish life” on the campus because the union “controls clubs funding, room booking and many other aspects of student life at the Scarborough Campus.”

Meric Gertler, the university president, said that the original resolution was inconsistent with the university’s “core values of freedom of speech and inclusion.”

“A requirement that providers of food as a religious accommodation be required to apply for an exemption, or even be asked about their views about issues elsewhere in the world is unacceptable,” Gertler said.

A Jewish student campus group, UTSC Jewish Student Life said the revision made matters worse because the pro-BDS resolution retains a passage that says the union will “refrain from engaging with organizations, services, or participating in events that further normalize Israeli apartheid.”

Jewish Student Life said this requirement could conceivably apply to kosher food providers that have anything to do with Israel — and there was no longer an exemption for kosher food, however restrictive that exemption was.

“With the new motion there is still a ban on affiliation or even interaction with organizations that ‘normalize Israeli apartheid,’- and this still includes food providers who identify as Zionists as do the vast majority of Canadian Jews,” Jewish Student Life said on its Facebook page. “Now, however, there is no opportunity for an exemption.”

Jewish students on campus had advanced the pro-Jewish rights resolution knowing that the pro-BDS resolution was sure to pass and sought to mitigate its effects, said Renan Levine, a political science professor at the university who advises the JSL.

The pro-Jewish rights resolution passed, albeit with some passages stripped out. Levine said the removal of the passages weakened the resolution, because it preserved rights for individual Jewish students, but did not extend them to Jewish organizations like Hillel.

The effect, he said, could prevent Jewish student organizations from receiving “financial and promotional support” and “access to student activity spaces controlled by” the student union.

Levine said that the passage of the Jewish rights resolution would still have positive effects because of elements that addressed an increase in hostility after the Israel-Gaza conflict in May.

“In light of multiple controversies about hateful messages about Jews and Israel posted in May when there was an escalation in violence in the Middle East, we find important language preserved in the motion that prohibits hostile, hateful and abusive behavior on social media by both student leaders and in forums controlled by the students, and protects Jewish students from being blamed for actions taken by the Israeli government,” Levine said in an email.

Two years ago, an official of the university’s Graduate Student Union said the union would not back a Hillel initiative to bring kosher food to campus because Hillel is “pro-Israel.” The union later apologized.