17 BDS resolutions considered and 11 passed at US colleges last year, per ADL report 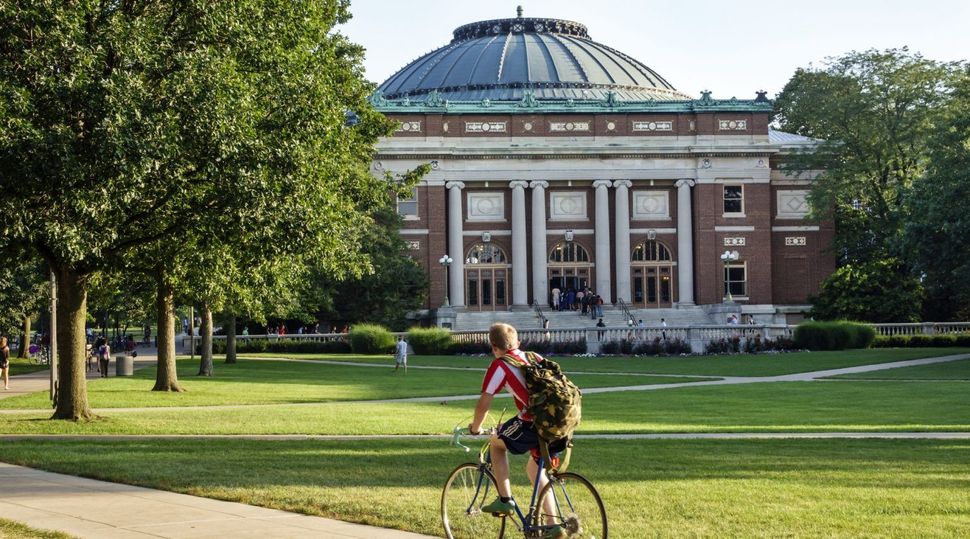 A student bikes across campus at the University of Illinois at Urbana-Champaign. (Jeffrey Greenberg/Universal Images Group via Getty Images)

(JTA) — Student governments considered resolutions to boycott, divest from and sanction Israel at 17 college campuses in the United States during the 2020-2021 school year, according to a new report from the Anti-Defamation League.

The watchdog group, which released the data Wednesday as part of its annual reporting, called the BDS resolutions a “cornerstone of anti-Israel campus activity during the last year.”

During a school year in which a May conflict between Israel and Hamas in Gaza was accompanied by widespread criticism of Israel on and beyond college campuses, the number of student governments entertaining BDS resolutions was not dramatically higher than in the recent past.

Of the bills supporting the Israel boycott, 11 passed, according to the report released Wednesday.

According to the U.S. Education Department, there are nearly 4,000 “degree-granting postsecondary institutions” in the United States, meaning that BDS resolutions were introduced at .425% of college campuses and passed at .275% of campuses last year.

None has been implemented, noted the ADL, which also noted that in some cases university presidents rejected the student government resolutions.

The ADL’s position is that not all criticism of Israel is antisemitic, but that the BDS movement is. Its report concludes that anti-Israel activity on campus last year continued to “span from legitimate criticism of Israeli government policies to expressions of antisemitism from some activists.”

Student leaders at at least two universities, the report notes, faced “exclusionary calls because of their expressions of support for Israel and Zionism” and one of them resigned over it.

“As we saw acutely during the May conflict with Hamas, the anti-Israel movement’s drumbeat of rhetorical attacks on Zionism and Zionists can truly hurt and offend many Jewish students, leaving them feeling ostracized and alienated,” the ADL’s CEO, Jonathan Greenblatt, said in a statement accompanying the report.

In a different report released this fall, the ADL found that one-third of Jewish college students said they had personally experienced antisemitism in the last year.

17 BDS resolutions considered and 11 passed at US colleges last year, per ADL report