A TV series celebrates a Brazilian’s rescue of Jews during the Holocaust. Is her story true? 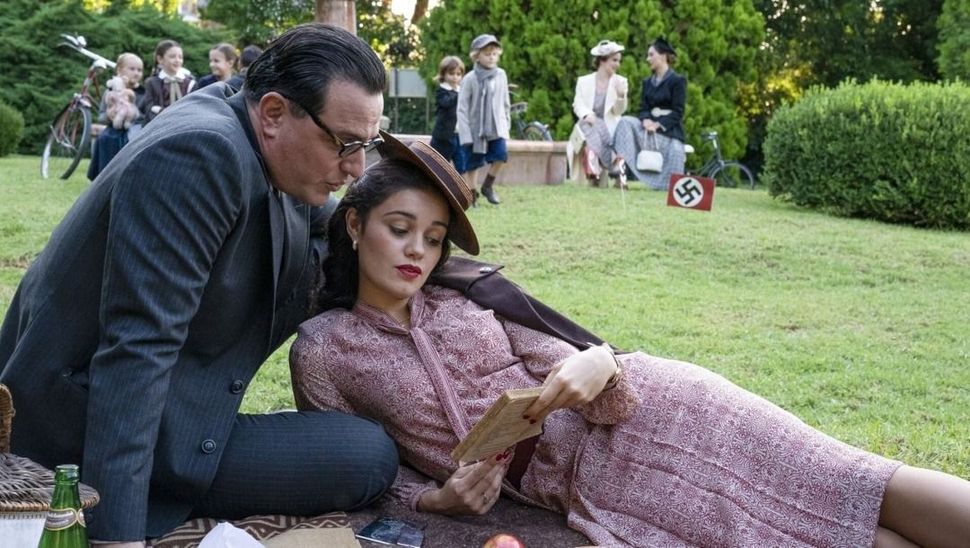 Actors Sophie Charlotte and Rodrigo Lombardi portray Aracy de Carvalho and the Brazilian writer and diplomat João Guimarães Rosa during the filming of “Passports to Freedom” in Germany in 2020. (Globo)

(JTA) — A historical drama series that premiered Sunday in Brazil was supposed to give belated recognition to a woman nicknamed “the angel of Hamburg” for her actions during the Holocaust.

Titled “Passports to Freedom,” the show produced by the South American media giant Globo and Sony Pictures has significantly amplified the little-known story of Aracy de Carvalho, who is credited with saving several Jews while working at Brazil’s consulate in Hamburg until 1942.

But two respected Brazilian historians are calling the story an exaggeration, arguing that de Carvalho followed orders during her time at the consulate, incurring little to no personal risk in issuing standard visas to German Jews who escaped.

As a consulate worker, de Carvalho helped at least five Jewish families flee in 1938-1939, facilitating their departure to Brazil, according to her file at Israel’s Yad Vashem Holocaust museum. In 1982, the museum recognized her as a Righteous Among the Nations – a title for non-Jews who risked their lives to save Jews. She died in 2011.

Historians Fábio Koifman and Rui Afonso questioned her claim to the title in a book published this year titled “Jews in Brazil: History and Historiography.”

In interviews in the days leading up to the TV series’ release, the pair triggered a debate in Brazilian media about her legacy. De Carvalho had not spoken much about the actions attributed to her during her lifetime, but has received growing recognition in recent years.

“The evidence shows there was no heroine in this story,” Koifman told the Portuguese-language edition of the BBC’s website this week. The fanfare around de Carvalho’s actions is part of a “creation of a myth,” the OUL news site quoted Koifman as saying.

Koifman told the BBC that de Carvalho did not have the authority to hand out visas, none of which bore her name or signature. The ones issued show no signs of falsification and were handed out in compliance with official Brazilian policy. All visas were signed by the consul, Joaquim Antônio de Souza Ribeiro, or his deputy, João Guimarães Rosa, who met de Carvalho at the consulate and later married her.

All visas were issued in compliance with the restrictive visa policy of the Brazilian government, the historians wrote.

Like many other countries, Brazil introduced restrictions to immigration that seemed designed to block the heavily Jewish flood of refugees from Europe. According to some historians, authorities in Brazil were especially discriminatory toward Jewish prospective immigrants.

In the 1930s, the Brazilian government required applicants to deposit a sizable sum of money into its national bank to be let in. This excluded many Eastern European Jews living in poverty, and also many German Jews whose possessions had already been stolen by the Nazis.

De Carvalho was involved in obtaining several tourist visas for Jews who fled Germany. The visas were instrumental to their escape flights, but the historians argue that de Carvalho acted as expected of her by her government, incurring little personal risk.

“You could say there was goodwill, or another motive behind the issuing of those visas but there’s no proof of this being the case,” Koifman and Afonso wrote in their book.

Rumors that de Carvalho removed the letter J from the German passports of the applicants were only that, the historians wrote. “All the passports had J in them,” Koifman told the BBC.

Several people whom de Carvalho assisted testified about her actions to Yad Vashem, which relied on those testimonies in recognizing her as a Righteous Among the Nations. But the visas issued to those people, including one woman named Margarethe Levy mentioned in the Yad Vashem file about de Carvalho, show no irregular action on the part of the consulate, the historians wrote. They call Yad Vashem’s recognition of de Carvalho as a Righteous Among the Nation “an error.”

“These situations, where myths are created, occur when memory does not correlate with history,” they wrote in their book.

The creators of the show defended its narrative.

“We have access to countless testimonies of descendants of survivors who spoke with great emotion about what they had heard from their parents, grandparents and great-grandparents,” Mario Teixeira told OUL. He also cited the “very profound research done” by Yad Vashem.

Yad Vashem did not immediately reply to a request for a comment on the issues raised by Koifman and Afonso.

—
The post A TV series celebrates a Brazilian’s rescue of Jews during the Holocaust. Is her story true? appeared first on Jewish Telegraphic Agency.

A TV series celebrates a Brazilian’s rescue of Jews during the Holocaust. Is her story true?