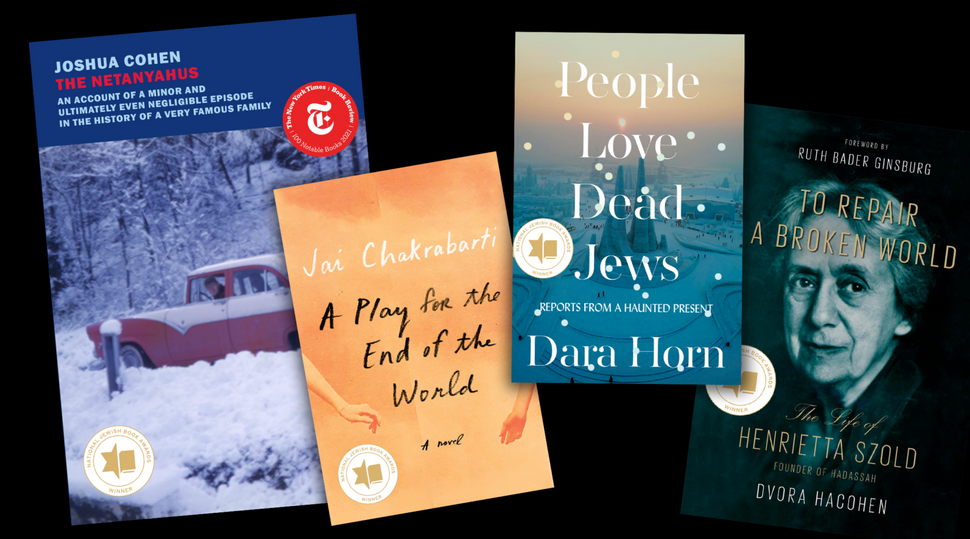 “To Repair a Broken World: The Life of Henrietta Szold, Founder of Hadassah,” which includes a forward by Ruth Bader Ginsburg, also was named best biography. The 2021 National Jewish Book Awards were announced Thursday by the JBC.

“Hacohen portrays the relentless passion of Szold, who devoted her life to creating opportunities both for Jewish women and the disadvantaged, as she sought to not only empower women, but also to foster a spirit of social cohesion and equality,” the council said in a news release.

Cohen’s “The Netanyahus: An Account of a Minor and Ultimately Even Negligible Episode in the History of a Very Famous Family,” a satirical chronicle of the future Israeli prime minister’s family’s time in America, won the council’s fiction award. Cohen told JTA sister site Alma last year that he “wanted to explore what it meant to be left out of history, in a strange way.”

Chakrabarti won the council’s debut fiction prize for his novel “A Play for the End of the World,” a fictionalized exploration of real-life Warsaw Ghetto educator and humanitarian Janusz Korczak and the children at the orphanage he ran.

The council’s top children’s book of 2021 was “Dear Mr. Dickens,” an historical account of a young Jewish girl who confronts Charles Dickens over antisemitic stereotypes in his books, by Nancy Chumin and illustrator Bethany Stancliffe. Its top book for young adults was “Rebel Daughter,” a novel by Lori Banov Kaufmann set during the destruction of Jerusalem in 70 CE.

The top book of poetry was “The Book of Anna” by Joy Ladin, a professor at Yeshiva University’s Stern College for Women who is the school’s first openly transgender professor.

Several history books also took home prizes. Batalion won a “Women’s Studies” prize for “The Light of Days: The Untold Story of Women Resistance Fighters in Hitler’s Ghettos,” which has been optioned for a film adaptation by Steven Spielberg. James McAuley, the Paris correspondent for the Washington Post, won the council’s history prize for “The House of Fragile Things: Jewish Art Collectors and the Fall of France,” a history of French Jewish art collectors between 1870 and the end of World War II that also doubles as a history of French antisemitism.

The council will honor its award winners during a virtual ceremony on April 6.