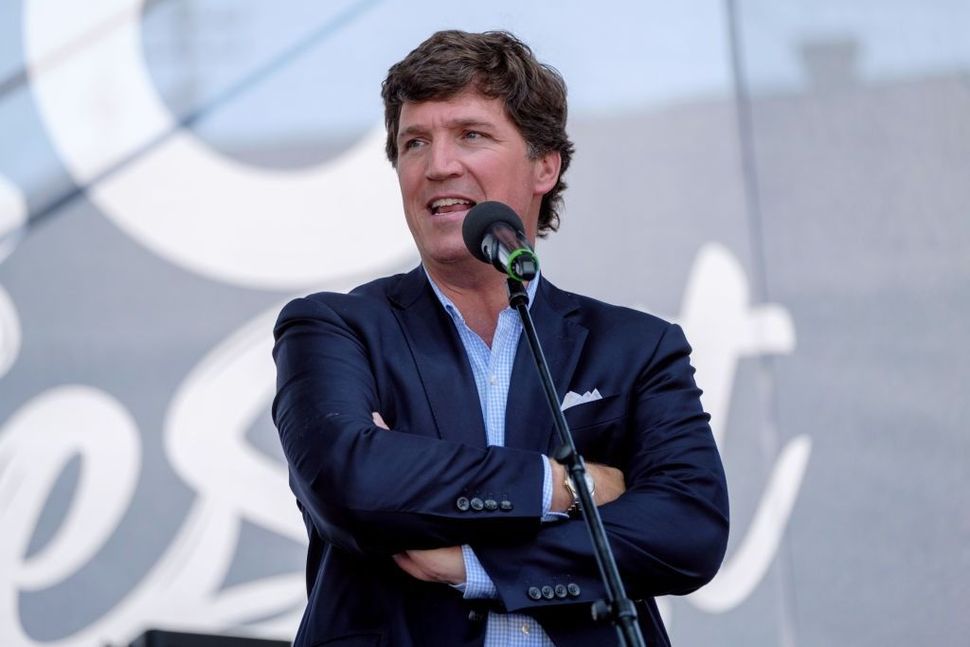 Tucker Carlson speaks at a conservative festival in Hungary in 2021. Image by Getty Images

Tucker Carlson, Fox News’s most-watched political commentator, has decided to broaden his scope from the U.S. to Hungary with a new documentary feature investigating “how one nation stopped George Soros from undermining civilization.”

Arriving Wednesday on Fox Nation, Fox’s streaming service, “Hungary vs. Soros: The Fight for Civilization” is the season finale of “Tucker Carlson Originals.” The series has also included a three-part feature on the Jan. 6 attack on the Capitol exonerating Trump supporters and accusing the Biden administration of waging “an actual war” with “soldiers and paramilitary agencies hunting down American citizens.” That feature caused two Fox contributors to quit.

Now Carlson is taking on Soros, who he accuses of “waging cultural warfare on the West.”

Soros, a Hungarian-American billionaire investor, philanthropist and Holocaust survivor, founded the Open Society Foundation, which funds progressive political and educational work. He has also become, like the Rothschilds, an antisemitic dogwhistle; just as references to Rothschild-backed initiatives are often used to imply that a secret cabal of wealthy Jews running the world, so are many references to “Soros-funded” NGOs.

Many antisemitic conspiracy theories have been built on the assumption that Jews wish to destroy Western civilization and Carlson assigns these same motivations to Soros. In a Fox interview about his new documentary, Carlson said Soros’s aim was to make society “more dangerous, dirtier, less democratic, more disorganized, more at war with themselves, less cohesive — in other words, it’s a program of destruction aimed at the West.”

In his episode on Soros, Carlson emphasizes the term “open society” in the name of Soros’s foundation as a way to show that Soros wishes to destroy nation states through immigration, alleging that Soros-funded NGOs teach fake refugees how to sneak into Hungary. Each time Soros is mentioned, he affects a deep, doom-filled voice and dramatic music backs high-contrast shots of Soros speaking or streets filled with protestors that are, somehow, Soros’s fault.

Meanwhile, cheerful accordion music accompanies all discussions of Orban, Hungary’s far-right prime minister, who has worked to undercut Soros. And his ethno-nationalist slogan of “Hungary for the Hungarians” and use of antisemitic tropes in campaigns has drawn harsh criticism for encouraging antisemitic sentiment in Hungary. Yet Carlson dispatches these accusations easily, omitting any examples of Orban’s antisemitism, and claiming that the headlines criticizing Orban are part of a leftwing media agenda that accuses all right-wing figures of hate speech. In any case, Soros, Carlson concludes, “is an opponent of Israel.”

Instead, Carlson lauds Orban for his anti-immigration stance — the government has built a large fence along its border, which the Fox News commentator calls “beautiful” — and his pro-family policies focused on increasing Hungary’s birthrate, a goal Orban explains by saying: “We would not like to leave this country to the migrants, we’d like to leave it to our grandchildren.” Carlson even moons over the graffiti in Budapest, noting that it is conservative instead of liberal.

Carlson clearly sees Orban as aspirational; in fact, he spends more time applauding his rightwing policies than he does decrying Soros. This episode, Carlson said, is an attempt to look to Hungary in order to “learn from it as an American and try to hold up the lessons for us to emulate.” Exactly which lessons those are remains to be seen.