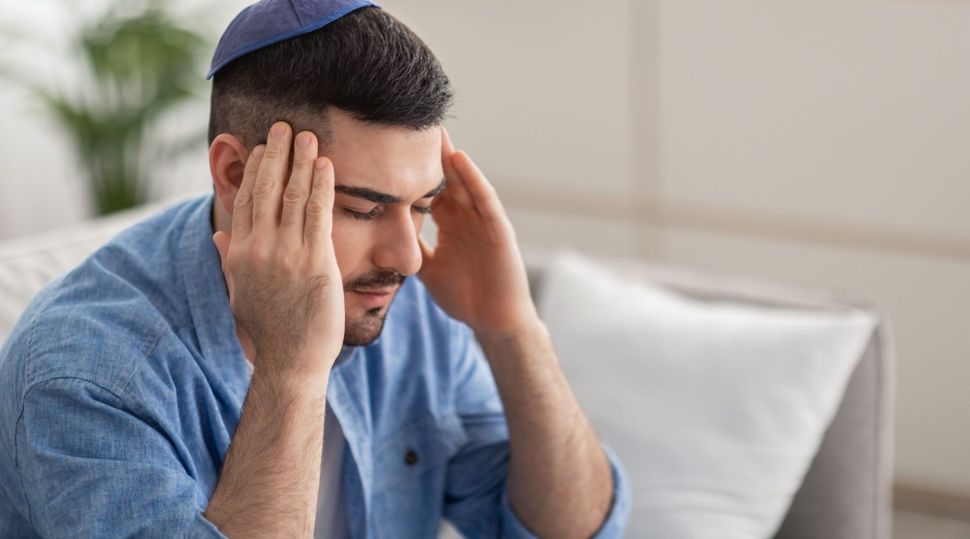 Rabbis are leaving their jobs in unusually large numbers as the pandemic enters its third year. (Getty Images)

(JTA) – In early December, Judaism’s Conservative movement sent a disquieting message to dozens of synagogues looking for a new rabbi: Many of you won’t make a hire this year.

At least 80 Conservative synagogues anticipated rabbi vacancies — approximately one of every seven affiliated with the movement, the email said. At most, 50 to 60 rabbis would be looking for new jobs.

“We are not presenting this information to alarm, but rather to help you prepare for and navigate the challenges of this search season,” said the email, which was signed by the “career search team” of the Rabbinical Assembly, the Conservative movement’s rabbis association, and United Synagogue of Conservative Judaism, the group that represents its nearly 600 congregations.

That email outlined a number of strategies that synagogues, rabbi applicants and movement organizations could adopt to mitigate the challenging job market. But last week, a new message indicated strongly that the mismatch remains acute.

Starting Feb. 1, the new letter said, the Conservative movement is suspending many of the rules that are meant to ensure that Conservative synagogues hire only rabbis trained at the movement’s seminaries or who have otherwise applied for and won admission to the Rabbinical Assembly.

Those rules are relaxed late in the hiring season in a typical year, but the accelerated timeline represents a concession that the movement, which has been shrinking for decades, is not fully situated to meet the needs of its congregations right now.

“We understand that this decision will be received with mixed emotions,” the latest email said. “This is yet another challenging year both in general, and for rabbinic search specifically.”

A confluence of factors has led to this year’s tight rabbinical labor market. But one of them seems to be that the Great Resignation has come for the rabbinate — with potentially major implications for American Jewish communities.

In what appears to be a blip, the first year of the pandemic saw fewer retirements of baby-boomer-aged rabbis. Rabbi Ilana Garber, the Rabbinical Assembly’s director of global rabbinical development, calls these rabbis “kind souls” who stayed because it was the right thing to do for their congregation during a time of crisis.

This year, there’s a bumper crop of retirements, while a thinning out of the next generation that was already underway continues. Denominational seminaries are ordaining fewer clergy, and fewer of those being ordained are choosing to assume the pulpit.

Another dynamic has emerged as the pandemic has worn on: More rabbis are choosing to retire early. And a significant number of rabbis have decided to leave their congregational jobs mid-career, many times with no intention of serving in another pulpit again.

Some of them, in keeping with one theme of the Great Resignation, say they are no longer willing to tolerate unpleasant working conditions. One rabbi told the Jewish Telegraphic Agency that “an atmosphere that stifles innovation, enthusiasm and initiative” and the “soul-crushing” experience of low participation in Shabbat and holiday observance in his community drove his decision to leave his synagogue.

Elsewhere, rabbis are seeking to capitalize on the growth of non-traditional work opportunities. One Conservative rabbi who had worked in a Long Island synagogue for eight years decided to leave to launch a consulting firm. Rabbis with more than a decade leading synagogues in New England and Minneapolis announced to their communities that they would leave their roles but remain in the area. And other rabbis told their congregations that they wanted to explore rabbinic work outside of the pulpit.

“Many rabbis have been working tirelessly through the pandemic and are seeking a position with life-work harmony,” the December letter cautioned synagogues. “Make sure to communicate your congregation’s needs, while also understanding the burnout pervading the entire workplace in 2021, rabbinic and otherwise.”

To rabbis on the job market, they wrote, “please communicate from the outset the time off and mental health support you require to perform your best work for your future community.”

Garber said she understands rabbinic burnout well. After all, she was experiencing it herself when she left the West Hartford, Connecticut, synagogue where she worked for 15 years shortly before the pandemic to take the Rabbinical Assembly role.

She said she was missing simple things, such as sitting next to her family during services. But she also found that what had drawn her to the rabbinate — the responsibility of supporting Jews at their most vulnerable moments — was working against her.

“After a while, if you don’t take care of yourself, each of those vulnerable moments can chip away at you to the point where you’re just going through the motions and you’re broken,” she said.

The pandemic has exacerbated issues of work-life balance for many people. Rabbis, like others across many fields, have taught and counseled via Zoom from their own homes, eroding boundaries that can be tenuous in the best of circumstances. Many have done so with small children at times attending virtual school from adjacent rooms.

Meanwhile, their roles expanded to include becoming health care consultants, responsible for keeping their communities safe from COVID-19, while the in-person gatherings that are the heart of rabbinic leadership have been constrained. More recently, the hostage crisis at a synagogue in Colleyville, Texas, offered a stark reminder that being a rabbi can entail physical risk, as well.

“‘Can I continue doing this for 20 more years?’ If you knew how many good, fulfilled rabbis are asking this question in their souls, with their spouse or partner, and to one another, you would sense that seismic shockwave that potentially faces us,” Rabbi Lewis Kamrass wrote in eJewish Philanthropy in October. “It could even be going on within your own congregation or organization.”

Kamrass is president of the Central Conference of American Rabbis, which represents 2,200 rabbis in the Reform movement, American Jewry’s largest denomination. Reform synagogues are also seeing an increased number of openings because of a surge in retirements this year, according to Rabbi Janet Offel, the director of consulting and transition management at the Union for Reform Judaism.

But it is within the Conservative movement where concern is sharpest. The Conservative synagogues hiring this year represent a broad cross-section of the movement, which is home to about 17% of American Jews, according to a recent survey by the Pew Research Center.

Some are growing and adding a second rabbi. Many are in regions that are attractive to Conservative rabbis because they offer Jewish day schools and kosher dining options.

But even some synagogues in major metropolitan areas appear to be struggling to find suitable candidates: A Conservative congregation in Montreal took the unusual step of buying a quarter-page ad in the Jerusalem Post this week to alert its readers that it is seeking a full-time senior rabbi. 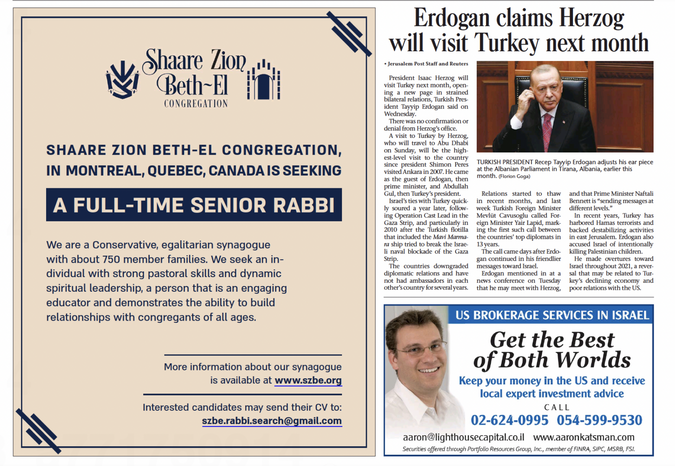 A synagogue in Montreal took the unusual step of placing an ad in the Jerusalem Post for its next rabbi, Jan. 28, 2022. (Screenshot)

Synagogues in areas with dwindling Jewish populations, where few amenities of Jewish life are likely to be present for rabbis and their families, may be having even more trouble drumming up rabbinical candidates. One synagogue in Kalamazoo, Michigan, told its congregants earlier this month that not a single application had come through the Conservative movement hiring system.

In more isolated communities, going without a rabbi could be a blow to organized Jewish life. And hiring a rabbi from outside the Conservative movement could change a synagogue community’s character — a reality that the most recent letter from the movement groups suggested guarding against.

“Please remember that non-RA rabbis may have a wide range of attitudes towards halakhah,” or Jewish law, which the Conservative movement prioritizes more highly than other non-Orthodox denominations, the latest letter to synagogues said. “We urge you to ask questions about their policies to be sure that the rabbi’s views are consistent with Conservative Judaism and your community’s values and priorities.”

Within the movement, officials expect a substantial number of synagogues to end the hiring season without a new rabbi under contract. Their concern is so acute that a team of 25 leaders has convened to discuss a looming questions: If synagogues can’t be reasonably assured of rabbis from within the movement, why should they continue to pay dues to belong to it?

“About a month ago we started really having some serious conversations about this when the numbers made clear to us that this was going to be something we needed to address for this year,” Garber said. “We do very much believe in the movement and that we need to strengthen this movement and answer the questions of why should I affiliate with this movement?”

Part of the answer could come with how the Rabbinical Assembly and United Synagogue of Conservative Judaism, which effectively merged in 2020, handle synagogues that end up without rabbis. The December letter outlined a range of possibilities, including creating a “cadre of transitional rabbis” to hold positions for a short time; initiating rabbi-sharing and other “outside the box” staff structures; and launching virtual programs “to ease the pressure on clergy.”

Garber said the task force — which includes representatives from the movement groups; deans from the Jewish Theological Seminary and American Jewish University, the movement’s two seminaries; and rabbis and cantors from various synagogues — had alighted on a plan. She declined to share details but said “an exciting opportunity” will come into play when, in not too long, the search process is resolved and the synagogues without rabbis seek help.

—
The post The Great Resignation is fueling a rabbinic hiring crisis that could leave synagogues without leaders appeared first on Jewish Telegraphic Agency.