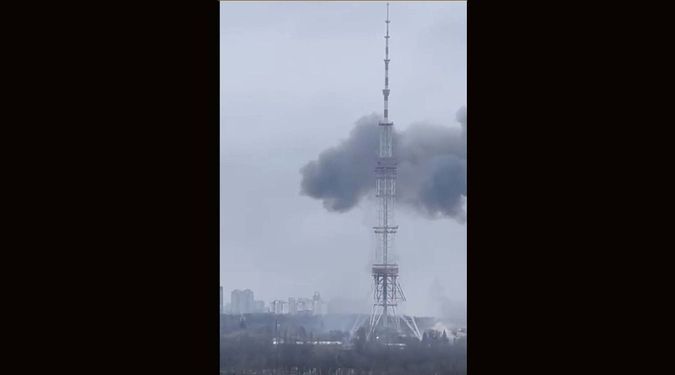 This story is developing.

A Russian missile Tuesday hit Babyn Yar, one of the most searing symbols of the Holocaust and Europe’s largest mass grave of the era. There, not far from Kyiv, the Nazis shot and killed 33,771 Jews over a 48-hour period in September 1941.

At least five people were killed in Tuesday’s attack, which also struck a broadcast tower, knocking out some of Ukrainian state-run television.

It is not yet clear if Babyn Yar, which is located in the vicinity of the tower, was targeted intentionally. Video footage shows the moment the antenna erupted into a ball of flames when it was struck by the missile. A spokesman for the memorial site said most of the damage at Babyn Yar site was to structures in its Jewish cemetery, and that the area is still being assessed, the Times of Israel reported.

But Ukrainian officials have responded as if the damage done to the Holocaust site was intentional.

Ukrainian President Volodymyr Zelenskyy tweeted: “To the world: what is the point of saying «never again» for 80 years, if the world stays silent when a bomb drops on the same site of Babyn Yar? At least 5 killed. History repeating…”

To the world: what is the point of saying «never again» for 80 years, if the world stays silent when a bomb drops on the same site of Babyn Yar? At least 5 killed. History repeating…

“These villains are killing Holocaust victims for a second time,” said Andriy Yermak, chairman of the Ukrainian Presidential Office.

The bodies of non-Jews are also buried in the ravine at Babyn Yar, which Ukrainians refer to as Babyn Yar. As many as 150,000 people who were murdered by the Nazis over a longer period are interred there.

As Jewish groups and others decried the strike on Babyn Yar, many noted that the site had been neglected during the Soviet era, and that Russian missiles Tuesday had damaged it. Others pointed to remarks Putin made last week to justify the invasion of Ukraine — that the Russians had come to “denazify” the country — and noted the irony of striking a site where tens of thousands of Jews had been killed by the Nazis.

Natan Sharansky, the former head of the Jewish Agency and the Babyn Yar Holocaust Memorial Center, said after the missile strike that the center’s work was to preserve the history of Babyn Yar after decades of Soviet suppression of its truth, so that “the evils of the past can never be repeated.”

“We must not allow the truth to — once again — become the victim of war,” he added.

Abby Stein, a New York Jewish activist, tweeted that the Russian military “is acting more Nazi like by the second.”

So many of us Jewish families from Ukraine have family killed at Babi (Babyn) Yar during the holocaust – that very likely includes President @ZelenskyyUa.

This is just too much. The Russian military is acting more Nazi like by the second.

The plan to transform Babyn Yar

Babyn Yar Tuesday was a panorama of destruction. Video and photos captured the charred corpses of those killed by the missiles, and a fire raging.

But just months ago, the scene was somber, but also hopeful. In October a ceremony was held at Babyn Yar to mark the 80th anniversary of the 1941 massacre. Taking part was Ukrainian President Volodimir Zelenskyy, who is the grandson of a Holocaust survivor; Israeli President Isaac Herzog; German President Frank-Walter Steinmeier and Albanian President Ilir Meta. They vowed to remember and honor the victims of Babyn Yar, and to recommit themselves to combating extremism.

They were joined by former political leaders, Jewish community leaders and representatives of the Babyn Yar Holocaust Memorial Center. That center, an international nonprofit, aims to transform the site into a multifaceted memorial that will include research institutes, a library and a museum. The museum is slated to open in 2025. The first structure erected by the project, unveiled in May, is a synagogue. 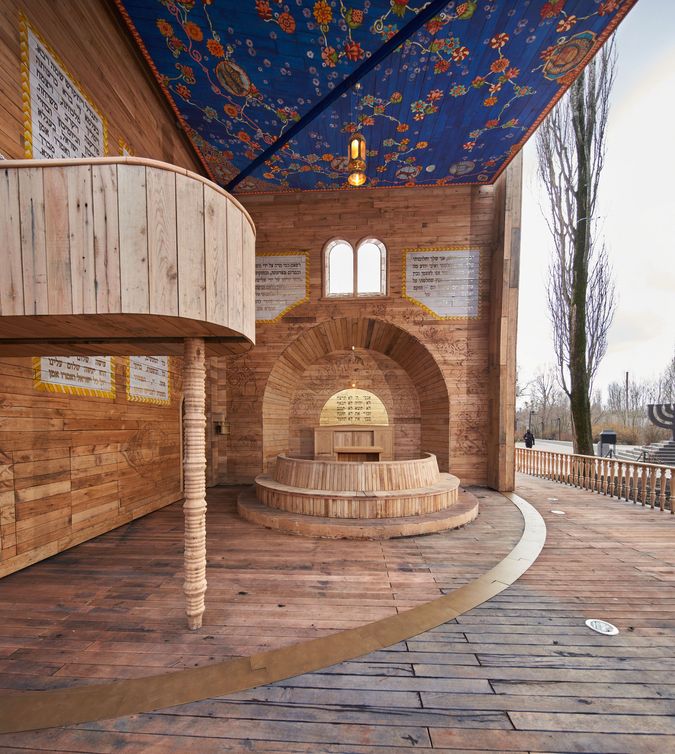 Herz modeled his design after the wooden synagogues that once dotted the Pale of Settlement.

Designed by Switzerland-based architect Manuel Herz, it is modeled on the colorful wood synagogues of Eastern European shtetls, constructed to invoke a siddur, and to open and close like a pop-up book. Herz told the Forward last year that the joyfulness of the building might seem incongruous for the site of one of the Holocaust’s largest mass shootings, but a somber building would not have made sense to him.

“The crime is so monumental. You can never match the monumentality of the crime through monumental architecture,” he said. “I wanted to do something that is much more suggestive in its architectural response.”

It is not yet clear whether the Babyn Yar synagogue was damaged in Tuesday’s attack.