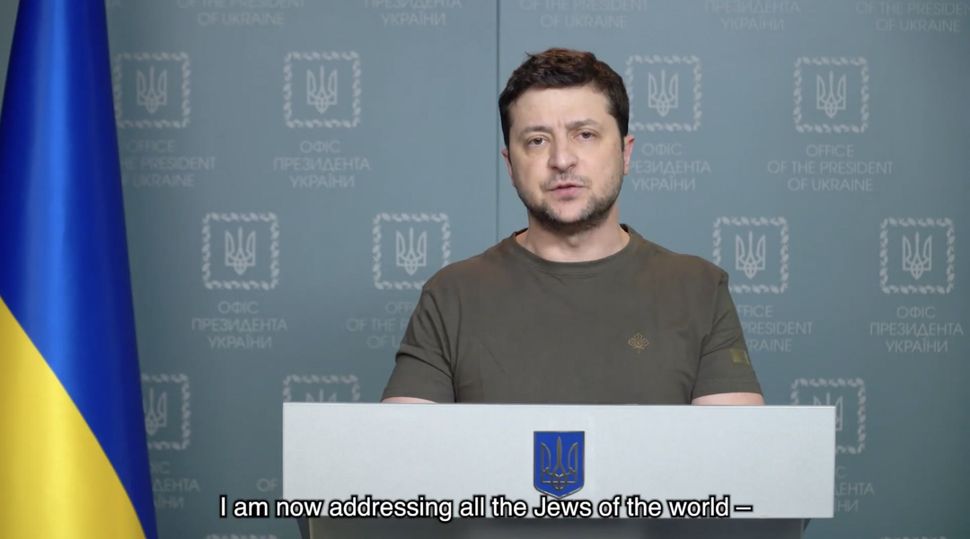 Ukrainian President Volodymyr Zelensky spoke directly to the world’s Jews during an address early Wednesday from his bunker in Kyiv. (Screenshot from Facebook)

(JTA) — The morning after Russian forces bombed the site of a 1941 massacre of Ukrainian Jews, Ukrainian President Volodymyr Zelenskyy called on the world’s Jews to speak out about what is happening in his country.

Russia’s attack on Babyn Yar, the Kyiv site where Nazis and local collaborators executed tens of thousands of Jews during the Holocaust, along with its bombing several days ago of Uman, the Ukrainian city where hundreds of thousands of Jewish pilgrims visit each year, represent an attempt to erase Ukraine’s history and identity, Zelenskyy said a speech delivered after another night of heavy fighting.

Jews and Jewish groups around the world have stepped in to support Ukrainian Jews, who number between 43,000 and over 300,000, depending on how the estimate is made. Many of those Jews have joined an exodus of refugees pouring over the country’s borders.

In the eight-minute address, which his office published with English subtitles, Zelenskyy did not mention that he himself is Jewish or that his own family members were killed by Nazis. But his anguish over seeing a Holocaust killing site attacked was palpable, as he described how a TV station and sports complex had under Soviet rule been “built on the bones” of people murdered there “to erase the true history of Babyn Yar.”

To Russia, he said, “You are killing Holocaust victims for the second time.”

Babyn Yar, formerly known as Babi Yar, is the name of a ravine on Kyiv’s outskirts where German troops murdered, with help from and Ukrainian collaborators, at least 33,000 Jews in September 1941 in one of the largest massacres of the Holocaust. The Jewish Telegraphic Agency provided the first news report of the massacre.

The ravine, a large open area with low-growing vegetation, is littered with multiple mass graves of Jews and other victims executed there. In recent years, a memorial museum site with several accompanying structures, still under construction before the Russian invasion, was constructed in the ravine.

Tuesday’s attack appeared to center on the TV tower, knocking out state broadcasting, but it also resulted in damage to the memorial complex.

“To the world: What is the point of saying ‘never again’ for 80 years, if the world stays silent when a bomb drops on the same site of Babyn Yar? At least 5 killed. History repeating…” Zelenskyy tweeted immediately after the attack, which drew widespread condemnation from Jews and others.