At Tufts, a student campaign urges peers not to join pro-Israel groups — even liberal ones 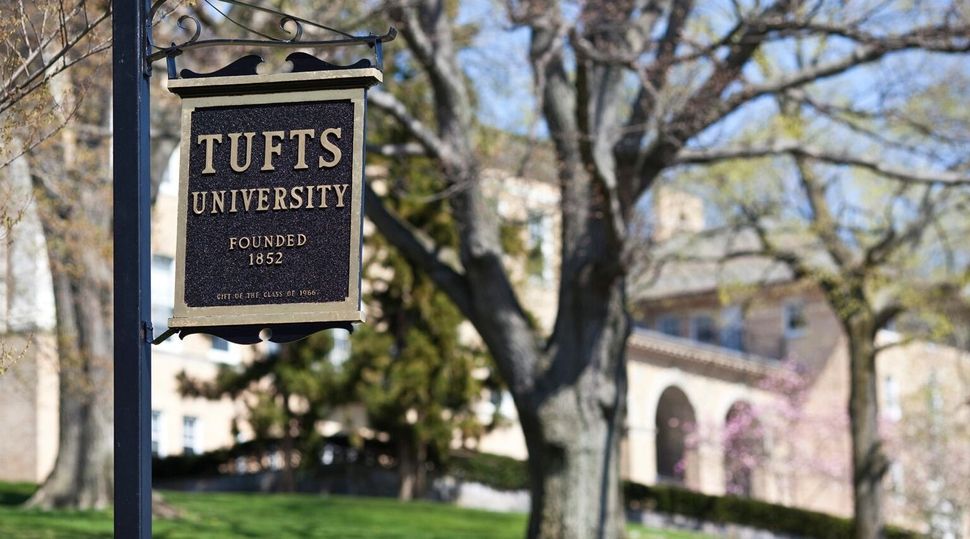 BOSTON (JTA) – University student-led campaigns to boycott Israel are not an uncommon sight, but a new student movement at Tufts University is taking a form rarely seen before in similar campus boycott efforts.

Tufts’ Students for Justice in Palestine chapter this week called for a strategic boycott against Israel, asking students to sign the group’s pledge not to buy Israeli snacks sold on campus (such as Sabra hummus). But in what some observers say is a new and troubling tactic, the group also asks students to refuse to join campus groups or programs “that normalize or benefit” Israel, including the student groups Tufts Friends of Israel, TAMID and Tufts J Street, a campus branch of the liberal Middle East policy group that advocates for a two-state solution.

The campaign also urges students to not study abroad in Israel or participate in Birthright Israel; not to take a university program entitled Visions of Peace that focuses on dialogue between Israelis and Palestinians; and not to enroll in a summer fellowship supported by the Anti-Defamation League.

SJP went public with “Justice Through BDS,” its latest initiative, on Monday in an op-ed in a student publication that it shared on its social media sites. The group supports BDS, the boycott, divestment and sanctions movement that targets companies that do business with Israel.

In its statement, SJP accuses Israel of violating human rights of Palestinians, including with demolition of homes and displacement dating back to 1948, the year Israel gained statehood. It describes Zionism as a form of “settler colonialism” and uses the term “apartheid” to describe its occupation of Palestinian land.

The statement included a justification for opposing J Street: “While SJP recognizes that many Jewish people begin their anti-zionist political journey through J Street U, and appreciates that J Street U’s Tufts chapter agrees that antisemitism and anti-Zionism are not synonymous, it is crucial for students to refuse half-measures that condemn occupation while normalizing colonization.”

The Tufts SJP did not respond to several requests for comment.

“We strongly oppose this renewed campaign at Tufts,” Patrick Collins, executive director of the schools’ media relations, said in an emailed statement to the Jewish Telegraphic Agency.

Collins expressed disappointment that SJP chose to ask students to boycott other student groups on campus.

Tufts rejects the BDS movement, “elements of which we believe are rooted in antisemitism,” according to Collins.

“As an educational institution, we must encourage honest and open debate about difficult issues, including those in the Middle East. Students for Justice in Palestine have an important role to play in these discussions. However, their most recent campaign is divisive and harmful. It doesn’t help foster important conversations — rather, it shuts them down while ostracizing fellow students,” Collins wrote.

The campaign could point to a larger shift in strategy for proponents of Israel boycotts, as a similar sentiment was recently expressed by the leader of the San Francisco branch of the Council on American-Islamic Relations. In November, Zahra Billoo delivered a speech urging pro-Palestinian activists to oppose “polite Zionists,” whom she defined to include Jewish groups like Hillel, the ADL and “Zionist synagogues.” “They are not your friends,” Billoo said at the time.

Tufts, a liberal arts college and research institution with some 5,800 undergraduates and a large Jewish student body, is located just six miles from downtown Boston. Over the years, its administration has taken a stand against academic boycotts and has rejected earlier efforts by SJP to have the school divest from Israeli companies.

Tufts Hillel condemned SJP’s call for a boycott against Israel and Israel-related programming on campus. In a statement on its Facebook page, Rabbi Naftali Brawer, the group’s executive director, and Allison Cohen, Tufts Hillel student president, said the groups targeted by SJP represent a wide spectrum of views on Israel.

“Unlike SJP, we firmly believe that dialogue is the only route to deeper understanding between people of divergent views and a lasting peace between Israelis and Palestinians,” they wrote.

The latest SJP campaign goes well beyond the conventional norms of boycotts, according to Robert Trestan, regional director of the New England Anti-Defamation League.

Asking students to sign a pledge refusing to associate with a range of groups elevates Trestan’s concerns, he wrote in a letter to Tufts University president Anthony Monaco that Trestan provided to JTA.

“This list … effectively creates a litmus test that could be used to restrict Jewish students from full participation in the many facets of student life,” he wrote.

He called on Monaco to speak publicly against the boycott, and to reassure Jewish students they will not be ostracized from full participation in campus life.

Violet Kopp, a sophomore and co-chair of the campus branch of J Street, first learned about the SJP boycott in an email last week from SJP. “My immediate reaction was disappointment and a bit of frustration, “ she told JTA in a phone conversation.

“A lot of the work we do relies on having open channels of dialogue and respecting disagreement,” she said. “The boycott fundamentally misunderstands the work we do.”

The goals of both groups is justice for all people, she noted. “The boycott feels very contradictory to that.”

In a series of Twitter posts, Tufts sociology professor Eitan Hersh shared his concern about SJP’s call to disengage with student groups such as J Street.

“I want our students at Tufts to know that the position articulated here (that groups supporting two-state solutions & peace deals are to be marginalized) is extreme & should be dismissed as such,” he wrote.

Kopp welcomed continued conversation about the Israeli-Palestinian conflict, including with those who are boycotting J Street.

“We are not boycotting them back,” she said. “We want to engage with everyone.”

—
The post At Tufts, a student campaign urges peers not to join pro-Israel groups — even liberal ones appeared first on Jewish Telegraphic Agency.

At Tufts, a student campaign urges peers not to join pro-Israel groups — even liberal ones