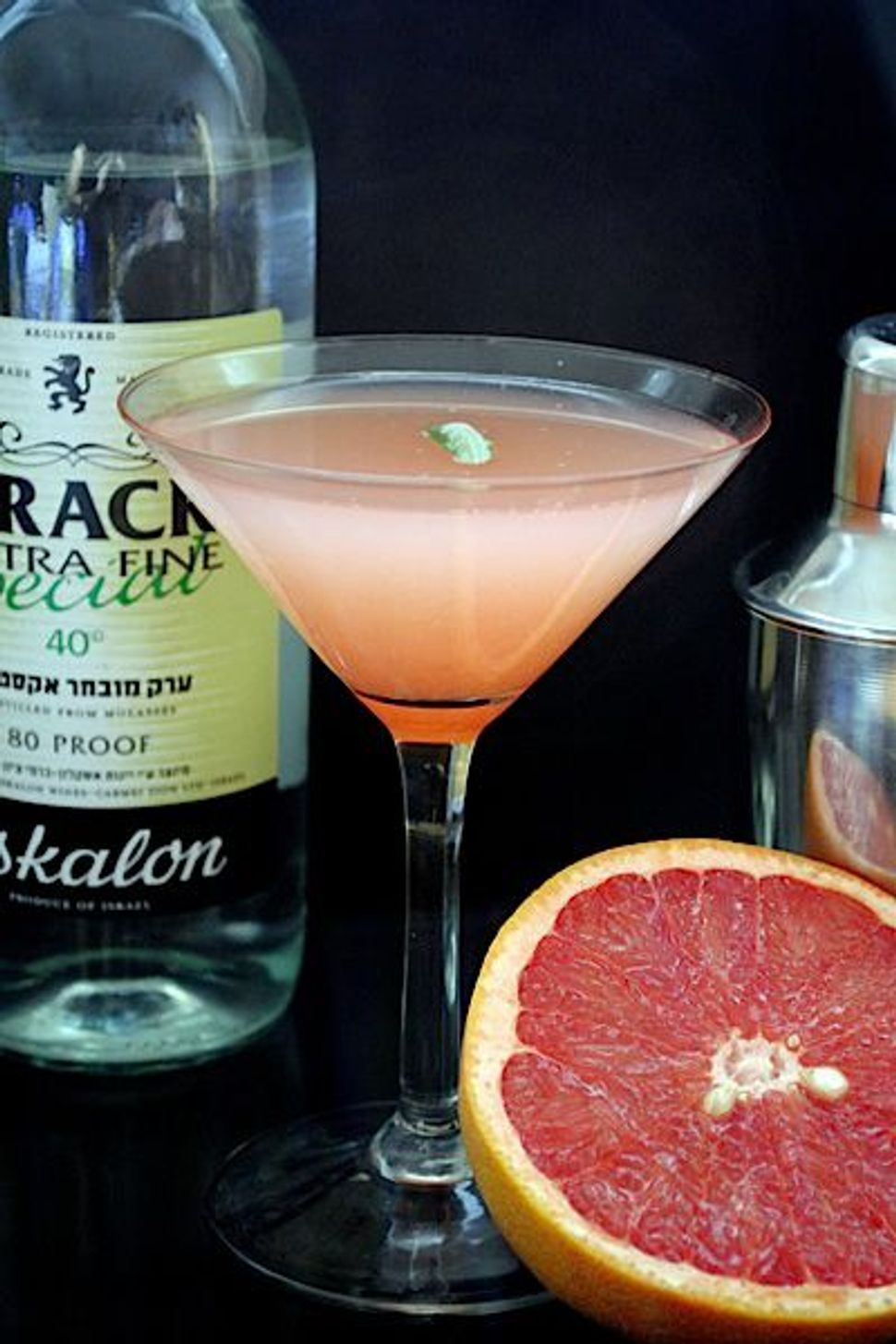 If you spent time in the Middle East, then there is a good chance you’ve had the pleasure (or horror, depending on your taste buds) of experiencing arak. The intense anise spirit shares a flavor profile with Greek ouzo, French pastis, Turkish raki and Italian sambucco, which are all produced according to a similar method, but with slightly different flavorings.

Once relegated to the older generation, arak is seeing a resurgence amongst the younger Israeli crowd. At its most basic incarnation, arak is a popular chaser to accompany a beer. But it is also popping up as an ingredient in the refined, modern cocktails that are slowly beginning to take off in Tel Aviv. At chef Omer Miller’s restaurant The Dining Hall, arak shows up in a number of drinks including the house cocktail where it is mixed with grapefruit, muddled sage and sugar, then shaken with ice and sour mix. The play between savory and sweet makes it Israeli food authority Janna Gur’s favorite cocktail for good reason.

And arak has made its way stateside, brought undoubtedly by Middle Eastern expats who miss the fiery taste of home. At Zahav, Chef Michael Solomonov’s modern Israeli restaurant in Philadelphia, arak shows up on the spirits list and in cocktails. The Saz-Arak is a reimagined version of the classic Sazerac (a mix of rye whiskey, simple syrup and bitters), with arak rinsing the glass instead of the traditional absinthe or Herbsaint. “Our guests are often intrigued by arak and ask about our selection,” explains Zahav sommelier and manager Brian Kane. “Most people are not familiar with arak but our staff appreciates it, and consequently spreads the word of this beverages’ inherent greatness.”

For purists, though, the true way to enjoy arak is also the simplest, with the addition of a few drops of cold water and – perhaps – a single ice cube. When water is added it causes the alcohol-soluble essential oils of the anise to form tiny crystals and turn the spirit white. Hence the nickname Milk of Lions, or Chalav shel Ariot (the lion part either comes from the fact that you need the bravery of a lion to down the stuff, or that a long night of imbibing arak will produce ferocious, lion-like behavior).

So where did arak come from? The true origin is debatable since it first appeared thousands of years ago. Much like hummus, neighboring countries claim arak’s invention while Israel has adopted it as its own. Although many claim Lebanon as the home of arak, some hypothesize that it was probably Middle Eastern Jews who first developed arak since their Muslim neighbors are forbidden to imbibe alcohol.

Originally made from fermented dates or figs, the process for making arak varies from long to longer depending on how many times the spirit is distilled and how many years it is aged. In their book, “Saha: A Chef’s Journey Through Lebanon and Syria,” Greg and Lucy Malouf describe how it all begins with crushed grapes that are allowed to ferment for three weeks, they are then placed in a copper still to distill. “The first distillation contains a poisonously high percentage of methanol. The first batch must always be discarded, and quality producers will distil the brew a second, third, and sometimes fourth time to achieve the smooth liquor desired,” add the Maloufs. Finally, the arak is aged in porous clay jars for at least one year.

Arak that is produced in Israel, such as Askalon and El Namrood brands, must strictly follow the kashrut process and as such is kosher. Additionally, New Jersey-based distillery Zachlawi also produces a local fig arak that is certified kosher and distributed nationally. Although arak hasn’t made it to most corner liquor and package stores in the States, big outfits like Astor Wines and Spirits in New York and BLM Wine and Spirits in Boston carry at least one variety. With the American cocktail craze in full bloom and mixologists constantly on the hunt for the next big spirit, it would be no wonder to find arak slipping onto cocktail lists in the U.S.

Rinse a rocks glass with arak. In shaker with ice, add the bourbon, St. Germain, lemon juice, and orange bitters. Shake, strain in the rocks glass, and garnish with an orange twist.

Muddle the grapefruit, sugar, and sage leaves. Fill a shaker with ice and add a dose of arak, 45 milliliters of the muddled grapefruit mixture, and the sour mix. Shake and strain into a cocktail glass and garnish with a sage leaf, if you like. Printed with Permission by The Dining Hall – Tel Aviv, Israel