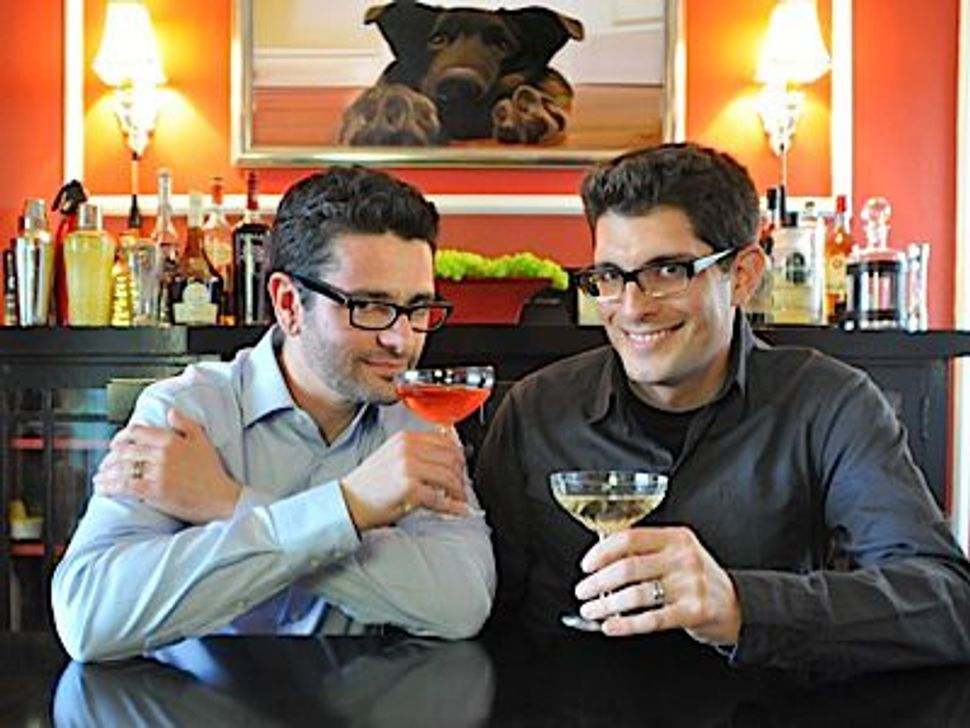 Image by Courtesy of the Sipping Seder

At first glance one might assume that a Sipping Seder, made up of six potent cocktails inspired by the Seder plate, is simply the grown up equivalent of the primary school’s set’s chocolate Seder — an excuse to over indulge, or a means to induce an alcoholic haze to counter the stress of a family Seder. Or perhaps, the maror and shank bone inspired drinks are simply the latest in the long line of Jewish kitsch.

But to meet the creators of this newest Passover culinary innovation is to quickly understand that kitsch, humor and pandering were the furthest things from the minds of Rob Corwin and Danny Jacobs, two serious cocktail enthusiasts. Outsiders may be oblivious, but their cocktail creations are cultural expressions with historic and social value. That seriousness played out in every stage of developing the recently launched Sipping Seder.

Passover was the last thing from Corwin and Jacobs’ minds when they were sitting in a bar in Beijing in 2008. But after a night of experimenting with cocktails made with manuka-honey vodka they decided to buy a bottle. Back home in San Francisco, they mixed it with Vermouth and realized that the taste reminded them of haroset and the idea of the Sipping Seder was born.

It would take several years, significant research and lots of experimentation before the two felt ready to publically share their Seder cocktails. Respecting the history and possibilities of the world of alcoholic spirits, Corwin and Jacobs felt that the Jewish resonances had to be equally authentic and creative. They studied and researched both the alcoholic and rabbinic sources to find the right blends to create a Passover tradition that would stand on its own.

When the recipes were done, the two enthusiasts reverent of tradition, asked Irwin Keller, the spiritual leader of a Reconstructionist congregation in Sonoma and a family member, to look over the materials they had prepared. He gladly added some words of wisdom, happily endorsing the project which in many ways embodies the traditional directive to renew the meaning of the holiday in every generation. He had only one piece of constructive criticism was a suggestions to add some humor.

I recently sat down with Corwin and Jacobs to learn about their Sipping Seder and get some of their recipes (see below).

Ruth Abusch-Magder: So after your time in Beijing how did you get started on the idea of interpreting Seder foods as cocktails?

Rob Corwin: Since moving out to San Francisco about ten years ago, we have been going to restaurants like Firefly and Perbacco for Seder inspired menus. The interpretive menus primed us for interpreting the holiday for our modern sensibility in California. It inspired us to do some interpreting of our own.

Jacobs: Perbacco does an Italian inspired menu, with artichokes.

Corwin: That was the inspiration for our hazeret cocktail. We thought about going with a romaine lettuce cocktail but that did not really work.

From the sound of it and from the amount of time it took to get all the cocktails done, this was not an easy project.

Jacobs: The borscht martini was easy but after that we got stumped.

What did you do with the shank bone? That must have been hard.

Jacobs: We definitely did not want to be too kitschy…

Corwin: …or too Halloween. Most of the blood cocktails out there are either Bloody Mary’s – which is not really the flavor profile we were going for – or really Halloweeny. We talked about a real lamb shank but that would have really freaked me out. We had to get over the idea that you could mix port with spirits and that was okay. Once we got over that we were able to hit upon the St. Charles punch for inspiration.

How does the Sipping Seder relate to the Passovers you experienced growing up?

Corwin: My mother is Jewish and my father is Catholic, they wanted to expose me to every thing and let me make my own decisions. Passover was more like Thanksgiving. My mother would tell me the story and there was lots of food. Matzo with butter, matzo ball soup, haroset, chocolate covered jelly rings.

Jacobs: My family is more traditional. My father was the president of the synagogue. We had a Passover Seder that seemed like it took forever.

What did you eat?

Jacobs: We didn’t normally keep kosher but for Passover it was all kosher for Passover. Matzo meal rolls and brisket. And Matzo Brei but we had that all year round. No one in my family drinks, except the shot right after services with the men at synagogue.

Corwin: The cocktail obsession might come from my non-Jewish side.

What do your parents think of all this?

Jacobs: We joke around that this is something that can really make a Jewish mother proud.

Corwin: Driving them to drink.

And how do you think that this project relates to the traditional Seder?

Corwin: We were trying to be really respectful of tradition and making it clear that this is not meant to replace the traditional Seder. So we checked in with Danny’s cousin… Irwin Keller who is the spiritual leader of a congregation in rural Sonoma… His reaction really encouraged us and helped us think that this might be something more than interesting just to us.

Do you think it has changed the way you think about Passover?

Corwin: Doing the research and studying about the Seder plate gave me more insight into the tradition. This project has pushed the threshold of what a cocktail is but is has also pushed the symbolism of Judaism too. I used to feel a little uncomfortable claiming my Jewish identity. I think this project has made me feel like I’m more in the center.

What are you guys doing for Seder this year?

Jacobs: We are going to our neighbors.

Corwin: And then we are going to have a Sipping Seder with all the cocktails in small portions and lots of appetizer size Passover foods. We are inviting our friends and we are going to use Irwin Keller’s four questions as conversation starters. I think they are really meaningful questions.

What is next for you and your obsession with cocktails?

Corwin: We are thinking about approaching some of the local restaurants to see if they might be interested in our cocktail.

Writers Note: Since doing the interview last week, the two were emboldened to take action on the idea of talking with some of the local restaurants about adding their cocktails to the Passover menus. Perbacco in San Francisco will feature their cocktails during their annual Italian Seder on April 20th.

It was easy to make a maror cocktail that echoed the taste of the red horseradish that commonly graced the Seder plate in Jacob’s childhood home, the two said. Playing with the beets used to color the white horseradish root, Corwin pushed towards the yellow beets that are popular in the San Francisco markets to give the drink a distinctive California flavor.

1) Cut the golden beets and horseradish into small pieces and muddle thoroughly in a mixing glass with half an ounce (15 ml) of the vodka.

2) Add the remaining vodka to the mixing glass and fill 2/3 full of ice. Shake vigorously.

3) Strain through a fine mesh strainer into a chilled cocktail glass.

Notes: We suggest slipping the beet garnish into the cocktail as you serve it. The red color will begin to bleed out into the yellow liquid immediately. Leave it to your guest to observe or agitate the process as they see fit.

One of the biggest challenges they faced was figuring out how to echo the taste and meaning of the hazeret, a bitter substance that is often represented by Romaine lettuce on the Seder plate. Playing around with possibilities, the two discovered much as you might expect, that bitter lettuce and spirits just don’t mix. At San Francisco’s Perbacco, the Italian inspired Seder menu introduced them to a set of Passover flavors that was completely unfamiliar. While the artichokes in vinegar left them longing for matzo balls, it helped them break through the barrier that was holding them back. Here is their final result:

1) Combine all ingredients in a mixing glass.

3) Strain through a fine mesh strainer into a chilled cocktail glass.

4) Twist a spiral of orange peel over the cocktail and use as a garnish.