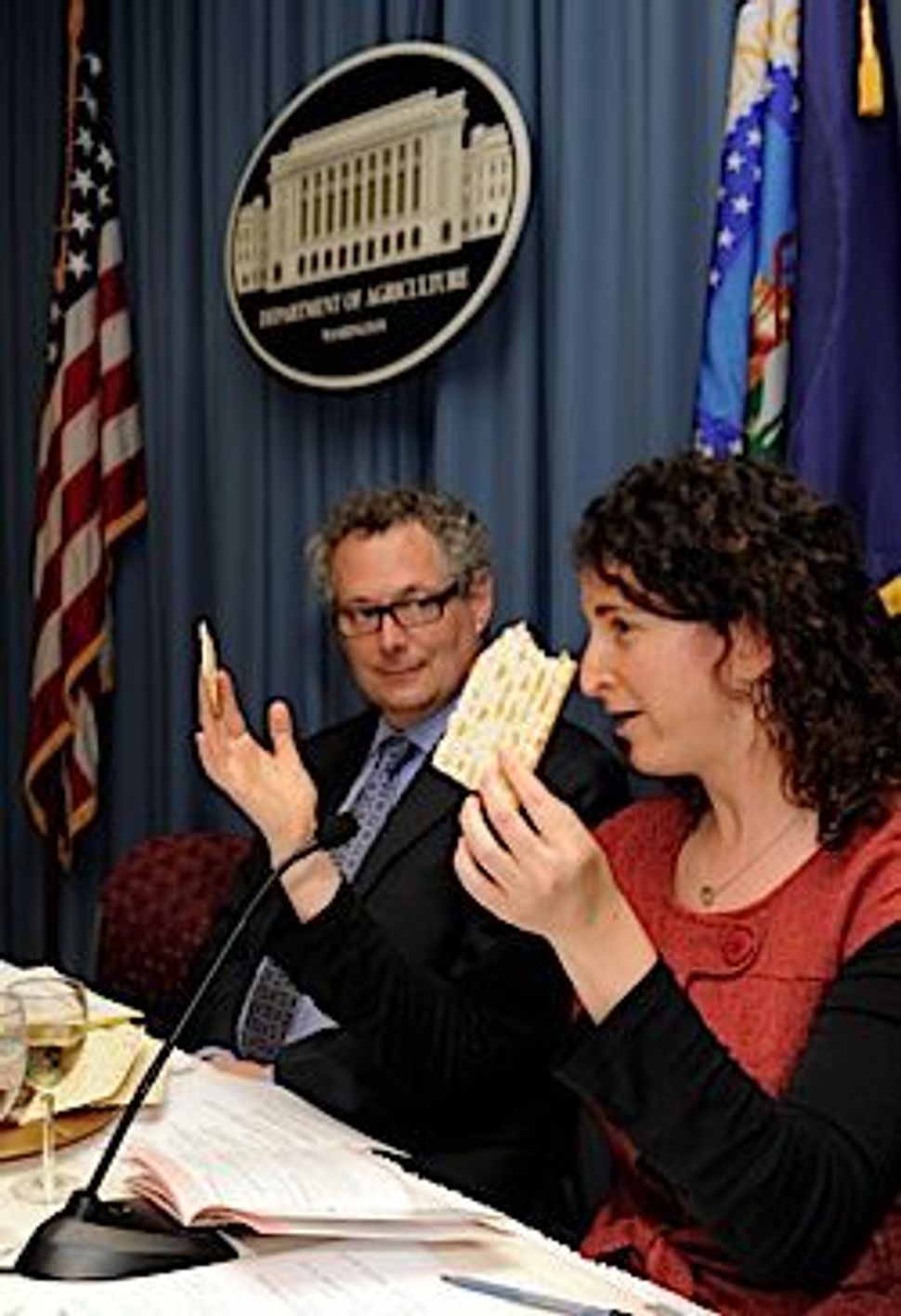 With a special Hagaddah published for the Seder by co-hosts Jewish Funds for Justice and the Progressive Jewish Alliance, the ritual meal focused on reflections on hunger and access to healthy food, the rights of food workers, sustainable food, eating intentionally, and taking actions to address injustice in our food production and distribution system.

As everyone present understood, this Seder was being held to declare that the violations of health, workers rights and environmental sustainability within our food system will no longer be overlooked, or passed over by the USDA.

The Seder was the brainchild of Simon Greer from Jewish Funds for Justice and Max Finberg, Director of the USDA Center for Faith-Based and Neighborhood Partnership, with a guest list that included Yael Lehmann from the Food Trust, Anthony Garrett from the Fair Food Network, and Jerold Mande, Deputy Under Secretary for Food Safety, among others.

As she split the middle matzo during the Seder’s opening moments, Rabbi Dara Frimmer, of Temple Isaiah in Los Angeles, spoke of the impossibility that the matzo would break into two completely equal pieces. This matzo’s two different sizes, she said, is a reflection of our world where some have more and some have less, as a reminder of the inequality that we all face.

During his remarks, Simon Greer highlighted a Food Desert Seder Plate, created by the Progressive Jewish Alliance. The graphic uses the symbols of the Passover Seder to explain the struggle those living in Food Deserts, or “areas with limited access to fresh and healthy food,” face. Steve Thomas, who lived on the streets of Washington D.C. for one and a half years, spoke poignantly about how hard it was to be in his fifties and homeless and how the food safety net helped to keep him going during this time.

While we sat in a rather unremarkable room, the six round tables were set with fresh raw vegetables and hummus to nibble on during the Seder. Our dinner was prepared from local, organic sources: tomato salad, asparagus, mushrooms, sweet potatoes, quinoa salad with cranberries, and chicken. Food was provided by Empire Kosher Chicken who was praised in the program book for its “admirable practices in sustainable farming, promoting worker and animal rights and its support of local family farmers and their communities”.

It was a thrill to be assembled with so many leaders whose individual and collective work has moved, and will continue to move this work forward. As I was getting ready to leave for my train back to New York, Simon Greer expressed his excitement that there truly is a Jewish food movement.

When the United States government acknowledges that Jewish action is critical to developing solutions for our nation’s challenges regarding the rights of food workers, food systems, and food related disease, there’s no doubt that the Jewish Food Movement is having an impact.

Judith Belasco is the Director of Food Programs at Hazon. She looks forward to furthering the conversation about food and justice at the Hazon Food Conference.