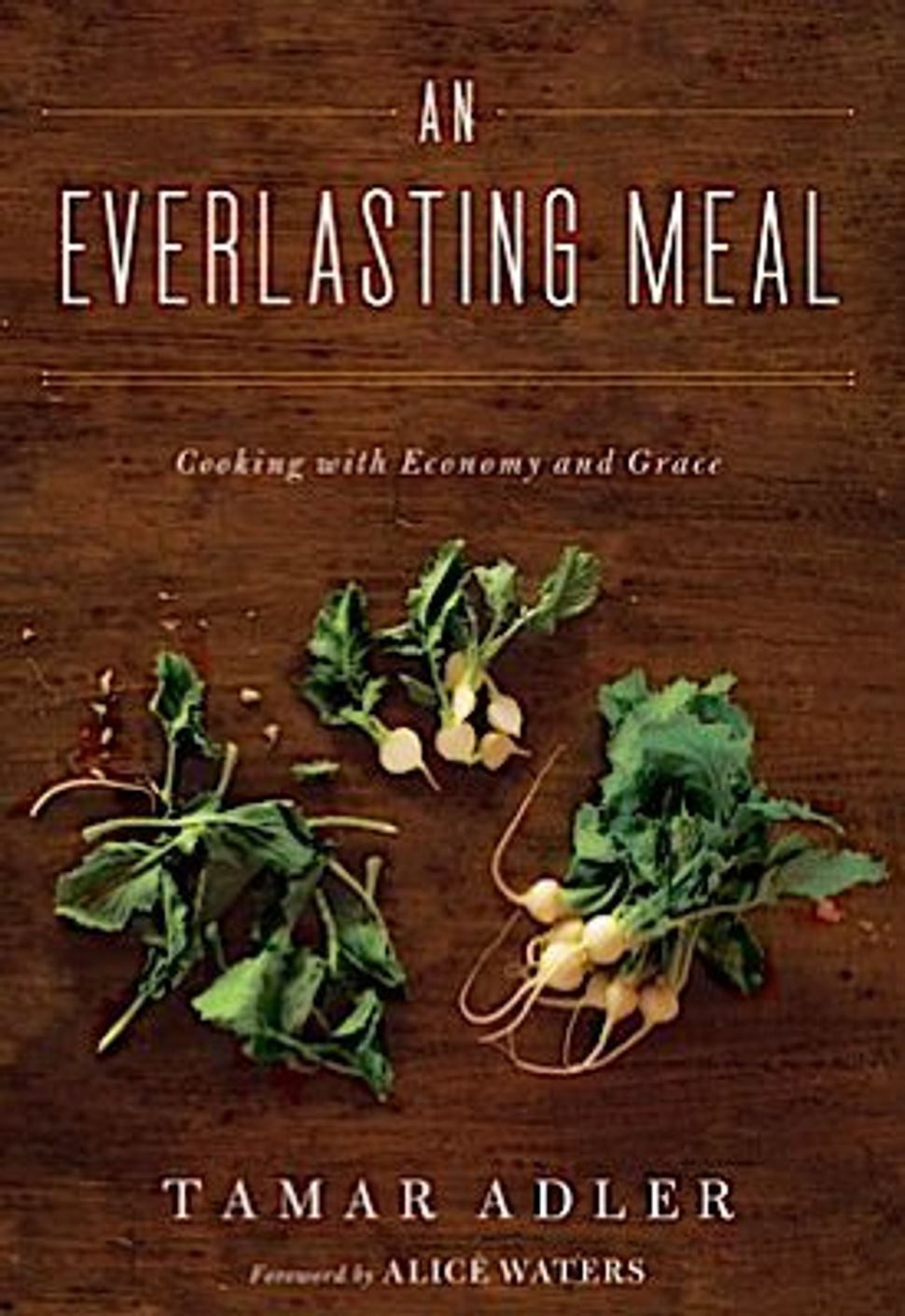 As the saying goes, too many cooks in the kitchen can be disastrous. But for Tamar Adler, author of “An Everlasting Meal: Cooking with Economy and Grace,” which came out this month, it’s a way of life. A former Harper’s magazine editor-turned chef, food educator and now cookbook author, Adler comes from a food-obsessed family. Indeed she, her mother and her brother are all professional chefs.

“An Everlasting Meal” highlights Adler’s passion for simple, seasonal cooking, which she discovered in her mother’s kitchen and honed while working at restaurants like Alice Waters’ Chez Panisse (Waters contributed the book’s foreword). Part cookbook and part literary food book, it focuses on cooking with instinct, employing all five senses to the task, promoting thrift by using every part of an ingredient, and elevating simple food to the sublime. Unlike most cookbook authors, Adler offers just a handful of traditional recipes, filling in the book’s pages with recipe riffs and kitchen wisdom. For example, she writes:

All ingredients need salt. The noodle or tender spring pea would be narcissistic to imagine it already contained within its cell walls all the perfection it would ever need. We seem, too, to fear that we are failures at being tender and springy if we need to be seasoned. It’s not so: it doesn’t reflect badly on pea or person that either needs help to be most itself.

Her M.F.K Fisher-esque knack for lyrical, intimate prose makes Adler’s book one to savor as much as cook from. Adler recently spoke to the Jew & The Carrot about her family’s rousing Friday night dinners, why she does not listen to music when she cooks, and how to move beyond the “30-minute meal” mentality to a place where cooking can be a joyful and central part of one’s life.

How did growing up in a food-centered household influence the way you think about food?

My family had dinner together every night and, nobody ever really ate alone in our house…which created a kind of conviviality around eating in our home. A few years ago, my brother and I also figured out that the main shaping food experience we had growing up was Friday night dinner. We weren’t allowed to go out on Friday night, but our parents let us invite as many friends over as we wanted. So we had these huge, crazy Shabbat dinners that solidified a sense of specialness around mealtime.

Did you eat traditional foods on Shabbat?

Not in the Eastern European sense of things. My father was a dyed-in-the-wool Israeli who does not cook but is passionate about eating Mediterranean and Middle Eastern food. When they got married, he set my mother up with some of his Israeli friends who taught her how to make techina and other traditional dishes. She also made this dish of long grain rice that got simmered in chicken stock and tossed with sautéed onions and herbs. It was my favorite thing in the world.

Who were the main cooks in your house?

My mom is truly an excellent cook. When I was growing up, she worked as a child psychologist. But at some point during my high school years she realized that she was spending all of her time thinking about and cooking food, so she started a personal chef and catering business called A Proper Meal.

As soon as my brother [John Adler, who is now a chef at Franny’s] in Brooklyn] was old enough to see over the stovetop, he was in the kitchen, knife in hand and wooden spoon in pot. For me, learning about cooking was more osmotic. I did a lot of tasting, which developed my palate early in a way that has been really useful as a chef.

What was it like cooking at Alice Waters’ restaurant, Chez Panisse?

It is a wonderful place, though sometimes it felt like I was in a foreign country. There are commonalities in the pace and tone of most restaurants and conventions for what things are called, but Chez Panisse has its own rhythm, logic and language. Instead of plastic, there’s ceramic, and there are no fancy tools, equipment or flourishes — it’s much more homey. Honestly, it could sometimes be a pain in the butt, but it taught me that it’s possible and even pleasurable to cook like that.

Tell me about the book’s philosophy of cooking with economy and grace?

One of the most economical things you can do is to make a commitment to having great meals. That doesn’t mean making elaborate food, it means using quality ingredients and realizing that the parts of the vegetables and animals we normally throw away are not only useful but also delicious. For example, dinner might be something incredibly simple like beans or eggs. But if I have some leftover mint stems that I steep in vinegar and mix with a bit of thyme or the end of a jar of olives, then suddenly I have a wonderful salsa that completely elevates the meal. When we can bind together a sense of economy and value in our cooking, that’s grace.

Do you listen to music when you cook?

No. I love music, but I think it does a disservice to cooking. You have to listen so carefully to what you’re doing when you cook — it is absolutely absorbing. Cooking itself is engaging enough, that I don’t see a need for music in the kitchen.

Your book reads like an ode to the amateur cook, as opposed to the professional chef. But some amateurs are very skilled and confident in the kitchen. Is the book also accessible to the beginning cook?

I think, I hope, I pray, that it does something for everyone. The book is not going to make people who are totally terrified of the kitchen jump in whole hog. But reading it will hopefully seed something in people’s minds and make them feel more engaged with cooking. I hope it empowers people to start a journey. I hope they realize that they don’t need to rely on Rachael Ray as much as they thought they did. They can learn to trust their instincts.